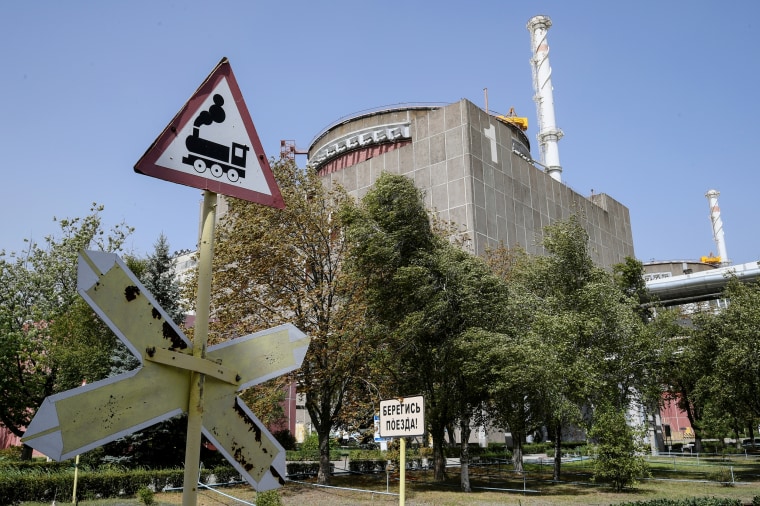 Ukraine’s nuclear power provider accused Russia on Saturday of “kidnapping” the head of Europe’s largest nuclear power plant, a facility now occupied by Russian troops and located in a region of Ukraine that Russian President Vladimir Putin has moved to annex illegally.

Energoatom said Russian troops stopped Murashov’s car, blindfolded him and then took him to an undisclosed location.

The 1st reactor of the Zaporizhzhia nuclear power plant.Konstantin Mihalchevskiy / Sputnik via APA couple hug each other near cars damaged by a missile strike on a road near Zaporizhzhia.Genya Savilov / AFP – Getty Images

Russia did not immediately respond to requests for comment.

The International Atomic Energy Agency, which has staff at the plant, said it had sought clarification from the Russian authorities and has been informed that Murashov was temporarily detained to answer questions.

The IAEA did not say whether he had been released and what his condition was.

Ukrainian officials did not immediately respond to requests for comment.

The Zaporizhzhia plan repeatedly has been caught in the crossfire of the war in Ukraine. Ukrainian technicians continued running it after Russian troops seized the power station. The plant’s last reactor was shut down in September amid ongoing shelling near the facility.

On Friday, NATO Secretary-General Jens Stoltenberg said the war in Ukraine was at “a pivotal moment.” He called Putin’s decision to take over more territory — Russia now claims sovereignty over 15% of Ukraine — “the largest attempted annexation of European territory by force since the Second World War.”

Elsewhere in Ukraine, however, a Ukrainian counteroffensive that last month embarrassed the Kremlin by liberating a region bordering Russia was on the verge of retaking more ground, according to military analysts.

The Institute for the Study of War, a Washington-based think tank, said Ukraine likely will retake another key Russian-occupied city in the country’s east in the next few days. Ukrainian forces already have encircled the city of Lyman, some 160 kilometers (100 miles) southeast of Kharkiv, Ukraine’s second-largest city.

Citing Russian reports, the institute said it appeared Russian forces were retreating from Lyman. That corresponds to online videos purportedly showing some Russian forces falling back as a Ukrainian soldier said they had reached Lyman’s outskirts.

The Ukrainian military has yet to claim taking Lyman, and Russia-backed forces claimed they were sending more troops to the area.

Ukraine also is making “incremental” gains around Kupiansk and the eastern bank of the Oskil River, which became a key front line since the Ukrainian counteroffensive regained control of the Kharkiv region in September.

In a daily intelligence briefing, the British Defense Ministry highlighted an attack Friday in the city of Zaporizhzhia that killed 30 people and wounded 88 others.

“Russia’s stock of such missiles is highly likely limited and is a high-value resource designed to shoot down modern aircraft and incoming missiles, rather than for use against ground targets,” the British said. “Its use in ground attack role has almost certainly been driven by overall shortages of ammunition, particularly longer-range precision missiles.”

Russian-backed officials in Zaporizhzhia pinned the blame for the attack on Ukraine without offering any evidence.

The British briefing noted the attack came while Putin was preparing to sign the annexation treaties.

“Russia is spending strategically valuable military assets in attempts to achieve tactical advantage and in the process is killing civilians it now claims are its own citizens,” it said.

The EU’s war on palm oil is about protectionism, not global warming – The Hill