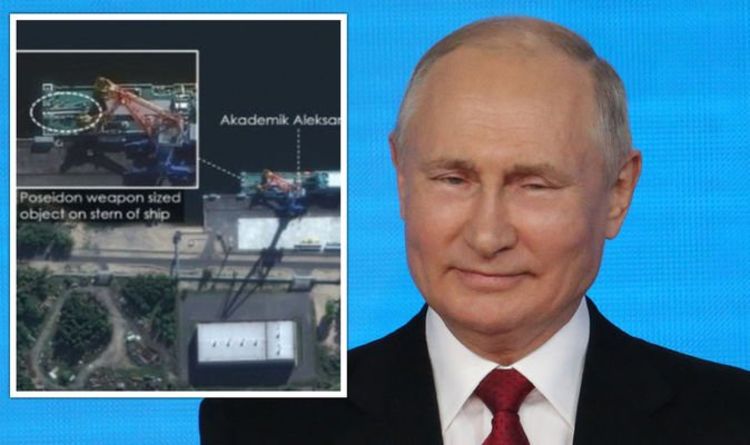 The weapon appears to be about the size of a bus, and US intelligence indicates that it is an “intercontinental nuclear-powered nuclear-armed autonomous torpedo”. The weapon known as the Poseidon has been hot under the collar of security experts since Russian President Vladimir Putin first leaked the existence of the “top secret” torpedo during a live speech in 2015. The new images give a hint of how Russia is using its new weapon.

Experts believe it will run extremely deep and fast underwater, judging by its design.

These advances have meant that Poseidon’s new category of strategic weapons is expected to change the shape of nuclear threats.

It comes after Mr Putin put a new arsenal of supersonic missiles on “combat alert”.

Mr Putin is driving the increase in the military potential of the Russian Navy by developing more and more military bases, infrastructures and state-of-the-art weapons.

These include Russian missiles developed by the missile design bureau NPO Mashinostroyenia, which are said to hit targets on land and water from over 1,000 kilometers away and can reach nine times the speed of sound.

The facility is located on the north bank of the Northern Dvina River on the edge of the White Sea.

Severodvinsk, where many of Russia’s most advanced submarines are built, is already closely associated with the Poseidon weapon.

The ships and special submarines used for the first tests were also stationed there.

By observing some new Russian facilities like this one, experts can get a good idea of ​​the capabilities of the Russian Navy.

It also gives them an estimate of the cost of the program, which will require new support infrastructure and a number of test ships and submarines.