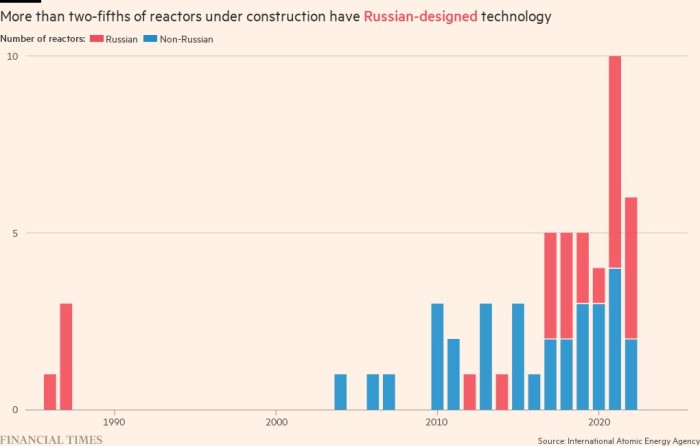 Faced with a global energy crisis and a race to slash emissions, advanced economies are starting to reconsider nuclear power after a period of declining investment.

The incentive is all the greater among European countries, which are urgently seeking to move away from Russian fossil fuels to starve the Kremlin of funds for its assault on Ukraine.

But an atomic shift does not necessarily free a country from energy dependence on Russia, given the scale of the country’s presence in the nuclear sector.

There were 437 operational reactors around the world as of 2021 excluding those suspended, according to the International Atomic Energy Agency. About 10 per cent or 42 reactors outside of Russia were using Soviet-designed VVER technology, with others using designs from countries including the US, Canada, Germany and France. Ukraine has by far the largest number of VVER fleets outside Russia, with all 15 of its operating reactors using the technology, with the Czech Republic next on six.

Similarly, of the 52 reactors currently being built around the world excluding Russia, 21 use VVER. China, India and Turkey have the largest number with 4 each, with countries like Bangladesh, Egypt and Iran also taking in Russian technology.

The prevalence of Russian-designed reactors currently being built is in part a matter of timing, according to Jonathan Cobb, analyst at the World Nuclear Association, who said “the Russian reactor program itself was very active” over the past decade when many of the contracts for these projects were signed.

“It’s comparable to looking back into the 70s and 80s. Westinghouse was a particularly active constructor in the US, and that led to the adoption of its technology more broadly worldwide,” he added.

Russia was also marketing its technology “very aggressively,” said Tim Stone, chair of the UK’s Nuclear Industry Association. “What the Russian government has done is they’ve put a lot of support into those nuclear programmes [in other countries]they have provided a lot more soup to nuts service.”

Russia was also the seventh-largest producer of uranium in 2021. State-owned Rosatom accounts for about 40 per cent of the world’s uranium enrichment capacity, making it a crucial supplier as most nuclear power stations use enriched fuel. 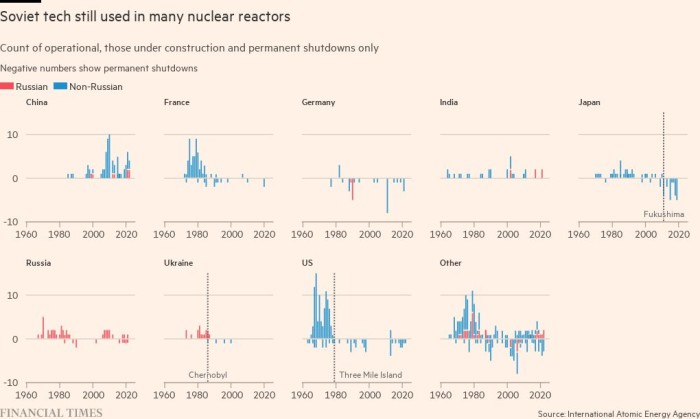 China is also increasing its exports of nuclear technology. With 27 of the 31 reactor construction projects started since 2017 of Russian or Chinese design, according to the International Energy Agency, battle lines are being drawn with the US.

In 2020, Romania ended six years of talks with China on the construction of two nuclear reactors and signed co-operation and financing agreements with the US, while the Czech Republic excluded Russian and Chinese companies from the tender to build a new reactor at its Dukovany nuclear plant on security grounds.

“A strong Poland-US alliance guarantees the success of our joint initiatives,” Mateusz Morawiecki, Polish prime minister, wrote on Twitter announcing the deal. The country also signed outline agreements with South Korea days after the US deal to assess the viability of building four reactors in central Poland.

For nuclear exporting nations such as the US, South Korea and France to compete with China and Russia, “there is a need for a way of finding how importing countries are able to secure the finance for the deals,” said Cobb of the World Nuclear association. 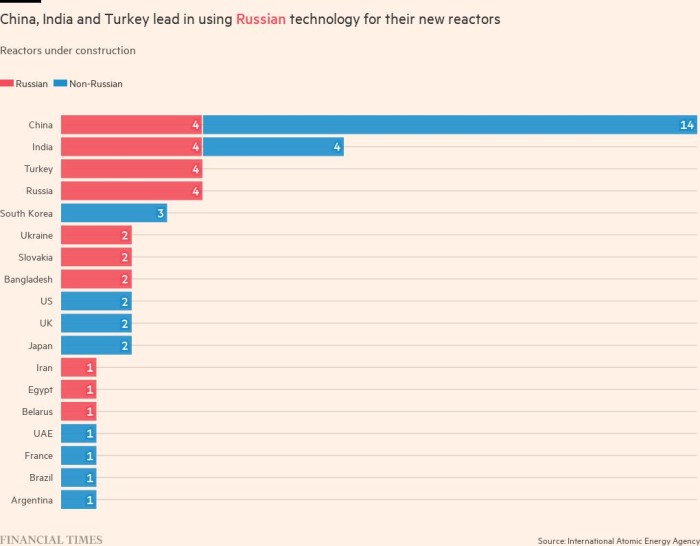 According to the body, there are about 30 countries that are considering, planning or starting new nuclear power programs.

“That might be through some support from the governments that are behind the companies that are looking to export deals or supportive programs from multilateral banks,” he said.

Data analysis and visualization by Patrick Mathurin and Chris Campbell