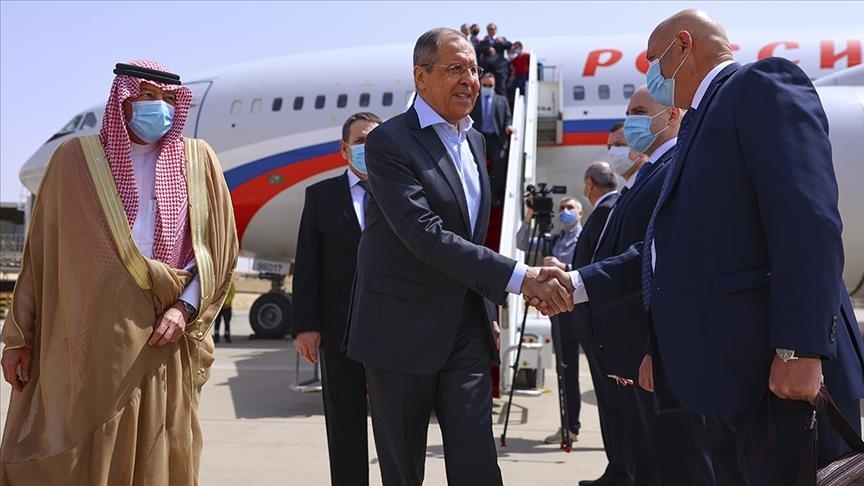 The UAE authorities made exceptions for the Russian delegation where it was received in the emirate of Abu Dhabi, although most of it is closed for visits due to the coronavirus pandemic.

The delegation was also released from a mandatory 10-day quarantine. However, Lavrov and the delegation had to run PCR tests before meeting the Crown Prince.

At a press conference following the meeting, ministers of Russia and the United Arab Emirates praised the development of bilateral relations, confirmed “overlapping or similar approaches” to the crises in the Middle East and promised “close coordination” in Syria and Libya and continue Yemen.

The UAE Foreign Minister surprised journalists by saying that US sanctions were the main obstacle to restoring dialogue with Syria. He also spoke out in favor of Syria’s return to the Arab League and reconciliation with the regional Arab countries, which was seen as a compliment to Russia, which has consistently called for the lifting of sanctions against Syria and its return “to the Arab family”.

On Israel, Lavrov once again welcomed his normalization with Arab states, including the UAE. However, he stressed that “a fair solution to the Palestinian problem must not take a back seat”.

Lavrov then turned to Iran and encouraged Arab countries to speak to Tehran. “Promotion, trust and transparency in military construction” would strengthen the security of the region.

Lavrov’s efforts to push the Arab countries into better relations with Iran may have deeper meaning than a simple desire to contribute to regional security, taking into account a recent statement by U.S. President Joe Biden who said he was ready to go to Iranian To return nuclear deal.

Steps in this direction require the coordination of Washington with its Arab allies. Since the UAE is the only regional actor that has contacts with Iran, Russia can seek the help of the UAE to soften the stance of other interest groups.

Lavrov also had an unplanned meeting with former Lebanese Prime Minister Saad Hariri, who has been trying to form a cabinet since the deadly Beirut explosions in 2020.

So far, France has been the main mediator between the Lebanese sides, without much success. The situation in the country has worsened and Hariri seems to need all the help he can find. Lavrov emphasized several times that Moscow has good relations with all Lebanese sides. Besides, Russia can also bring in a good word for Hariri with Iran and the Arab countries, as their position plays a role in the formation of the Lebanese government.

Lavrov’s visit to Riyadh was the shortest. He spent less than a day in the Saudi capital and had two meetings – with Crown Prince Mohammed bin Salman and Foreign Minister Faisal bin Farhan Al Saud.

Lavrov was the first top foreign diplomat to come to Saudi Arabia after the US transferred responsibility for the murder of journalist Jemal Khashoggi directly to bin Salman.

It is unlikely that Lavrov’s visit had anything to do with the US announcement, as his visit to the kingdom was planned in advance. Russia “supports” Saudi Arabia “morally” for the second time – in 2018, Putin met bin Salman at the G20 summit in Buenos Aires immediately after media leaks claimed that the prince was directly involved in Khashoggi’s murder.

At a press conference after meeting his Saudi counterpart, Lavrov noted that trade between Russia and Saudi Arabia rose to nearly $ 1.7 billion despite the coronavirus pandemic.

He also said the two ministers discussed organizing the conduct of the third phase clinical trials of the Sputnik V vaccine in Saudi Arabia, manufacturing it in the country, and affirming a willingness to continue cooperation and efforts in global oil markets, too within the country, to coordinate the OPEC + format.

Regarding the outlook, Lavrov said there was “considerable potential for the implementation of pioneering projects in space exploration and nuclear energy.”

Lavrov spoke on regional affairs, saying Russia is ready to “provide the necessary assistance” to achieve “long-term normalization in the region,” which means a possible improvement in relations with Iran, but the Saudi Foreign Minister made it clear that the kingdom’s position on Iran remained unchanged, accusing it of pushing Yemeni rebels to attack Saudi Arabia.

Lavrov failed to accuse both sides in Yemen, saying: “Everyone must obey international law.”

Faisal bin Farhan Al Saud took a cautious stance on the Syrian settlement but said Syria “needs to return to the Arab embrace and achieve stability and security”.

Lavrov’s comment on Syria was also brief. None of the ministers mentioned the previous day’s visit to Riyadh by the Russian envoy for Syria to Syria, who allegedly sought Saudi’s support in dealing with the Syrian opposition.

Ministers advocated the creation of “permanent pan-Libyan government agencies” and minutes later it became known that the Libyan parliament, with representatives from both sides, approved a new cabinet headed by Abdul Hamid Dbeibeh.

Lavrov again pushed for a resolution on the Palestinian issue based on existing international law, recalling that it included the Arab peace initiative proposed by Saudi King Abdullah.

“The long-term stabilization of the entire Middle East will be considerably complicated without resolving all the questions about the principles agreed in its framework,” Lavrov said.

Birth of the ‘Doha Format’

Lavrov’s visit to Qatar was marked by the introduction of the new trilateral format for Syria – Russia, Qatar and Turkey. The format will “complement” the Astana format and deal with the humanitarian aspects, as the foreign ministers of the three countries said at a press conference in Doha.

It was later revealed that Russia also invited Qatar to participate in the Moscow meeting on Afghanistan, which contributed to Qatar’s growing reputation as “Arab Switzerland” – a neutral platform for discussion of controversial issues.

According to the Russian Foreign Ministry, the main focus of the meetings was on the need to reach as soon as possible political solutions to conflicts in Syria and Libya, a reliable and long-term solution to the Arab-Israeli conflict and the promotion of the process of inter-Afghan national reconciliation.

Russia and Qatar agreed to take “practical steps” that would form a constructive, unified agenda in the Persian Gulf and help create a system to ensure collective security, stability and sustainable development.

The Anadolu Agency website contains only a portion of the news aggregated to subscribers of the AA News Broadcasting System (HAS). Please contact us for subscription options.