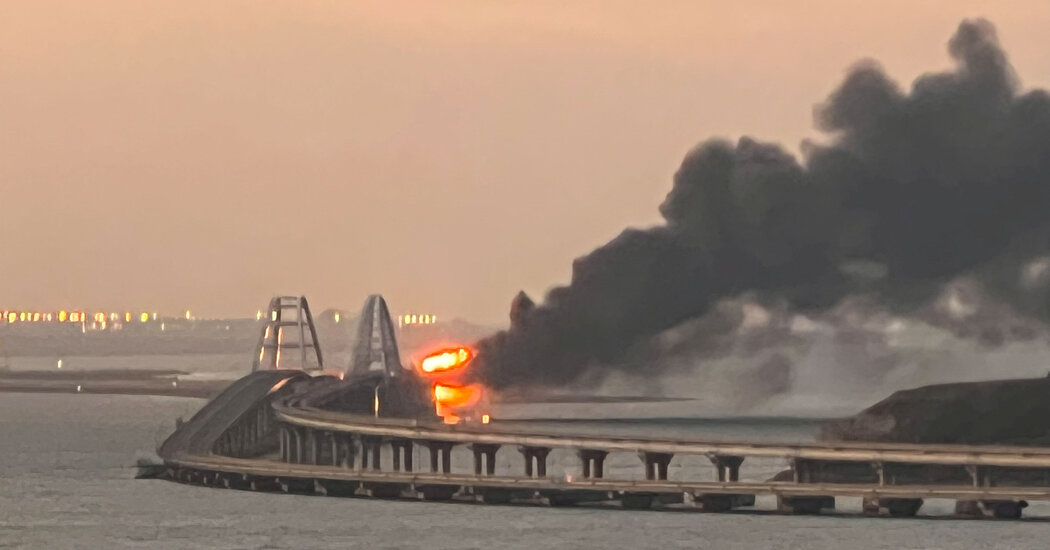 A fire on the Kerch Strait Bridge in Crimea on Saturday.Credit…Reuters

KRYVYI RIH, Ukraine — A fireball erupted on Saturday on the sole bridge linking the Crimean Peninsula to the Russian mainland, and at least part of the crossing collapsed into sea, imperiling the primary supply route for Russian troops fighting in the south of Ukraine.

The 12-mile-long Kerch Strait Bridge has become an important symbol of the claims that Russia’s president, Vladimir V. Putin, makes to the peninsula, which his forces seized from Ukraine in 2014. Mr. Putin presided over the opening of the bridge in 2018, personally driving a truck across.

Videos showed intense flames and a large plume of black smoke billowing off the railroad section of the bridge. At least part of the automobile section, which runs parallel, appeared to have collapsed.

RIA, a Russian state news agency, reported that a tank with fuel had caught fire and that the bridge deck was undamaged. But a pro-Ukrainian Telegram channel, Ria-Melitopol, posted a video showing that two sections of the bridge had been damaged, suggesting sabotage or a strike on the bridge, not an accident.

“A cistern is burning, and look, the road is damaged,” a man speaking Russian says in the video filmed from the bridge.

Ukrainian officials did not immediately comment on the cause of the fire, which occurred the day after Mr. Putin celebrated his 70th birthday. Senior officials have said in the past that the bridge would be a legitimate target for a Ukrainian strike.

“It is an illegal construction and the main gateway for supplying the Russian army in Crimea,” Mikhailo Podolyak, an adviser to Ukraine’s president, said in August. “These kind of objects must be destroyed.”

A senior Ukrainian military official did not deny that Ukrainian forces were behind the attack but would not confirm it.

“All I can say is that an echelon with fuel intended to supply occupation forces in the south of Ukraine was passing over the bridge from Krasnodar Krai,” the official said, speaking on the condition of anonymity because he did not have permission to speak to the newsmedia.

The official added: “Putin should be happy. Not everyone gets such an expensive present on their birthday.”

If Ukraine claims an attack on the symbolically important bridge, it would show that Kyiv is uncowed by increasingly bellicose Russian threats of escalation in the war after Mr. Putin claimed to have annexed four additional provinces in southern and eastern Ukraine and threatened to defend them by any means.

The bridge is strategically important for Russia’s army as a route for supplies of fuel, ammunition and weaponry into the war zone in southern Ukraine that would otherwise have to be ferried across the strait, which is often stormy in the fall.

Oleg Kyuchkov, adviser to the head of the peninsula’s Russian occupation government, said on his Telegram channel that emergency workers had set up aid stations on the bridge for stranded drivers.

The bridge over the Kerch Strait has been a pillar of Mr. Putin’s claim to the Crimean Peninsula since the completion of the twin road spans in 2018, celebrated as a physical link between Russia and lands Mr. Putin has asserted are historical Russian territory.

The peninsula’s annexation in 2014 is a central piece of Mr. Putin’s political legacy, buoying his popularity even as the Russian economy said under Western sanctions. It was known as the “Crimean effect” in Russian domestic politics.

Ukrainians loathe the bridge. Over the summer, the Ukrainian military posted a taunting image on Twitter threatening to strike the bridge with American-provided guided rockets. The video showed the launch vehicle, a High Mobility Artillery Rocket system, floating on a pink inflatable pool raft in the strait, and the bridge in the background.