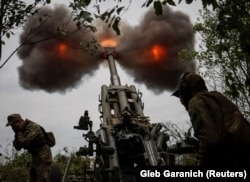 Ukraine’s state nuclear company, Enerhoatom, has said that both reactors functioning at the Russia-occupied Zaporizhzhya nuclear power plant have been reconnected to the electrical grid after Kyiv earlier claimed that the plant was cut from the national power grid by Russian shelling.

RFE/RL’s live briefing gives you all of the latest developments on Russia’s ongoing invasion, how Kyiv is fighting back, Western military aid, global reaction, and the plight of civilians. For all of RFE/RL’s coverage of the war, click here.

The nuclear plant was disconnected for the first time in its four-decade history on August 25 because of a fire that Ukrainian President Volodymyr Zelenskiy said was caused by Russian shelling that struck the last working power line linking the plant to the grid.

Earlier, Enerhoatom said there were no issues with the plant’s machinery or its safety systems, as electricity for the plant’s own needs was currently being supplied through a power line from Ukraine’s electricity system.

On August 25, Zelenskiy said a nuclear radiation disaster was narrowly avoided after Russian shelling in the area caused the electricity to Zaporizhzhya, Europe’s largest nuclear plant, to be cut for hours.

Russian bombardment triggered fires in the ash pits of a nearby coal power station that disconnected the Russian-controlled plant from the power grid on August 25, Zelenskiy said, but back-up diesel generators provided the electricity supply vital for cooling and safety systems at the plans.

Russia has denied responsibility, with the Moscow-installed officials in Zaporizhzhya region blaming the fire and subsequent outage on Ukraine’s armed forces.

Zelenskiy praised the Ukrainian technicians who operate the plant, which has been under the Russian military’s control since early in the war. The plant has six Soviet-designed reactors, but just two have remained in operation amid the fighting.

“Russia has put Ukraine and all Europeans in a situation one step away from a radiation disaster,” he added.

Disconnecting the plant from the grid posed a potential danger as a failure in backup power systems could have led to a loss of coolant and brought about a melting of the fuel in the reactor core.

The NATO-compatible AHS Krab 155-mm self-propelled tracked howitzer has been deployed by Ukraine against Russian targets near Donetsk.

Foreign officials have warned of a potential catastrophe and continue to push Russian and Ukrainian forces to do more to safeguard Europe’s largest nuclear station.

Russia has controlled the facility since about two weeks after invading Ukraine on February 24, keeping workers prisoner and holding them at gunpoint to operate the plant, whose first reactor went into operation in 1985.

Western leaders have demanded that Russia hand the plant back to Ukraine, while UN Secretary-General Antonio Guterres has called for it to be “demilitarized.”

On August 26, French President Emmanuel Macron warned against the use of civilian nuclear facilities as an instrument of war.

“War in any case must not undermine the nuclear safety of the country, the region, and all of us. Civil nuclear power must be fully protected,” Macron said during a visit to Algeria.

Western leaders have previously demanded that Russia hand the plant back to Ukraine, while the UN chief has called for it to be “demilitarized.” The UN nuclear watchdog, the International Atomic Energy Agency (IAEA), has declared its intention to send a mission to inspect the power station.

In Washington, White House spokeswoman Karine Jean-Pierre told reporters on August 25, “Russia should agree to the demilitarized zone around the plant and agree to allow an International Atomic Energy Agency visit as soon as possible to check on the safety and security of the system.”

On the battlefield, the General Staff of the Ukrainian Armed Forces said on August 26 that its forces had repulsed Russian assaults on the towns of Bakhmut and Soledar in the eastern Donetsk region and struck ammunition depots and enemy personnel in the southern Kherson region.

The Ukrainian General Staff said earlier that Russian forces conducted unsuccessful offensive operations in the direction of Slovyansk in the Donetsk region and kept pounding Kharkiv, Ukraine’s second-largest city, as well as Kramatorsk, Novopavlivka, Zaporizhzhya, and the area of ​​the Pivdenniy Buh river with artillery, tank, and rocket fire.

Russia’s offensive in eastern and southern Ukraine has slowed down in recent weeks, apparently hampered by high losses in personnel and military equipment, despite Defense Minister Sergei Shoigu’s recent claim that Moscow was reducing the pace intentionally in order to avoid collateral damage among civilians.

It said that Shoigu and President Vladimir Putin have “very likely” fired at least six generals for not advancing quickly enough.

The intelligence report said a Russian missile strike on a railway station in central Ukraine on August 24 that Moscow said was targeting a Ukrainian military train highlighted “Russia’s willingness to cause collateral damage when it perceives there is military advantage in launching missile or artillery strikes.”

The strike left at least 25 people dead, including children, Kyiv has said, while Russia’s Defense Ministry claimed, without producing any evidence, that the strike targeted and killed more than 200 Ukrainian soldiers who were on their way to fight in Donbas.

Neither the Russian nor the Ukrainian claims could be independently verified.