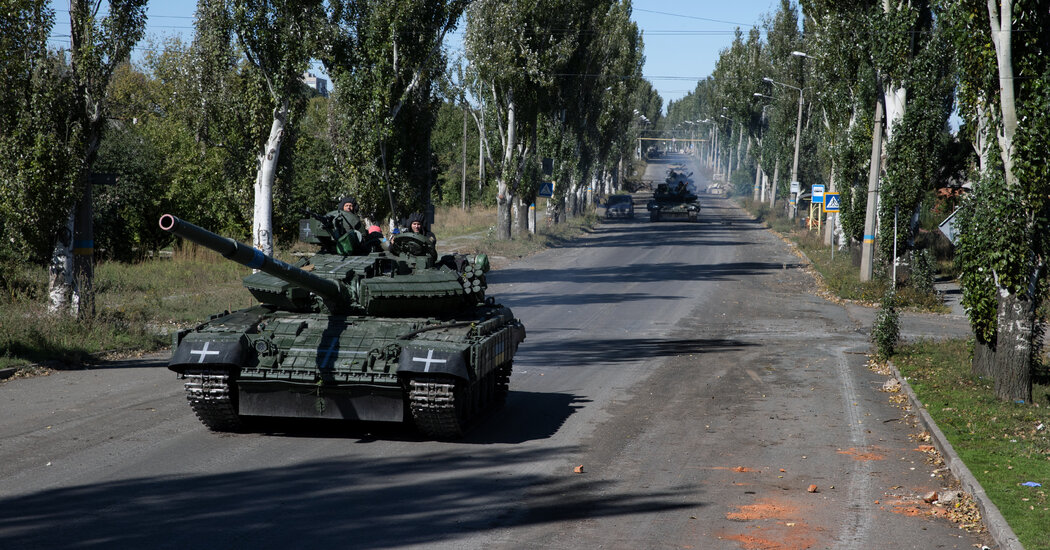 Billboards with patriotic slogans and images of Russian soldiers have gone up in cities across Russia, as the military attempts to shore up the combat losses it has suffered in months of war in Ukraine.Credit…Dmitri Lovetsky/Associated Press

KYIV, Ukraine — This summer, when the Russian military was still grinding out bloody gains in eastern Ukraine, the unrelenting thunder of its artillery on the battlefield underscored the vast arsenal of munitions Moscow’s army could draw on to smash its way forward.

But Russia was struggling with another vital resource: soldiers. As its casualties mounted in Ukraine, military analysts said, Moscow began to engage in what they called a “covert mobilization” aimed at creating “volunteer battalions.” State television broadcasts aired telephone numbers to call for those interested in joining the “special operation” in Ukraine. Solicitations for “contract soldiers” were widespread.

This month, a video emerged showing prisoners being recruited to fight as mercenaries in Ukraine, offering a vivid example of Russia’s desperation to replenish depleted ranks.

Even with President Vladimir V. Putin of Russia’s announcement on Wednesday of a “partial mobilization,” Western military analysts, as well as current and former US military officials, said it could take several weeks, if not months, for Russia to mobilize, train and equip additional combat-ready troops.

Michael Kofman, director of Russia studies at CNA, a defense research institute in Arlington, Va., said the Kremlin’s first step will likely be to call up reservist officers and others with more recent military experience to replenish badly depleted units in the field. The Russian military has been identifying such personnel for months in anticipation of Mr. Putin’s order, he said.

“Bottom line, it’s not going to change a lot of the problems the Russian military has had in this war, and the military will be limited as to how many additional forces it can deploy in the field,” Mr. Kofman said. “But it does begin to address the structural problems that Russia has had with manpower shortages.”

Crucially, Mr. Kofman said, Mr. Putin’s announcement extends indefinitely the service contracts of thousands of soldiers who signed up thinking that they would only serve several months, and enacts policies preventing them from refusing deployment to Ukraine or leaving the service.

Russia’s defense minister, Sergei K. Shoigu, asserted in his speech on Wednesday that 5,937 Russian soldiers had been killed in the fighting in Ukraine, offering the first official account of casualties since March. Western officials put the Russian casualties much higher, estimating that more than 80,000 Russian troops have been killed or wounded.

Sailors moving a Russian military helicopter during military exercises in the Sea of ​​Japan off Vladivostok, Russia, this month.Credit…Kirill Kudryavtsev/Agence France-Presse — Getty Images

Even if Moscow can mobilize reservists, the Russian military faces serious shortages in equipment, vehicles and weapons, and generating new units to replace those lost in battle might not happen until early next year, some officials said.

“It will be many months before they can be properly equipped, trained, organized and deployed to Ukraine,” Frederick B. Hodges, a former top US Army commander in Europe. “And without massive artillery support, these new soldiers will be pure cannon fodder, sitting in cold, wet trenches this winter as Ukrainian forces continue to press.”

Its struggles to mobilize enough regular troops has forced the Kremlin to rely on a patchwork of impoverished ethnic minorities, Ukrainians from the separatist territories, mercenaries and militarized National Guard units to fight the war.

In parts of the eastern Luhansk and Donetsk regions that Russia has occupied since 2014, conscription is mandatory for men aged between 18 and 65. Many of the frontline fighters are local recruits. Since they are Ukrainian citizens, the Kremlin is cavalier about their casualties, experts say.

Yurii Sobolevskyi, an exiled member of the regional council in Kherson, one of the occupied territories where a referendum is planned, warned on Wednesday that men of conscription age who received a Russian passport or provided their personal data to occupying forces are most at risk of conscription.

“The best way to avoid forced mobilization is to leave for Ukrainian-controlled territory,” he said. “If this is not possible, people should change the place of residence known to the occupying authorities and try to avoid crossing checkpoints and patrols.”

‘Huge demand for SMRs’ – so what are the key challenges? : New Nuclear – World Nuclear News