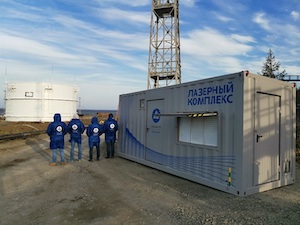 Russian mobile laser tested for arctic accident and emergency use

Rosatom announced on September 8 that it had participated in the first pilot research exercises organized by the Russian Ministry of Civil Protection, Emergencies and Disaster Recovery (Emercom). During the “Safe Arctic” exercises, Rosatom demonstrated the operation of a mobile laser complex (MLC) to eliminate the consequences of accidents / the MLC was developed by the Troitsk Institute of Innovative and Thermonuclear Research (Triniti – part of the scientific division of Rosatom, JSC Science and Innovations).

During a practical exercise to put out a fire at the Dudinka Oil Tank Farm, Triniti specialists used the MLC to cut a process hole in the burning tank wall.

“Using laser technology to eliminate the consequences of accidents will enable departments to significantly reduce the time required for a rescue operation and enable them to work in hard-to-reach places,” said Aleksandr Bondar, director of Emercom’s Department of Education, Scientific and Technical Politics. “In addition, the trauma risk for specialists who assist in accident situations is excluded.”

Triniti director Dmitri Makarov said the exercises “made it very clear that mobility and rapid deployment of the complex in the event of man-made accidents are a great asset.” He added, “Our complex replaces at least three special forces machines and a team of rescuers. Now, Triniti’s commercial division, led by Azamat Bedanokov, is negotiating the development of a number of similar complexes for Emercom. ”

Safe Arctic was a large-scale pilot research exercise conducted by Emercom on September 7th and 8th in seven arctic regions. Participants included representatives from foreign emergency organizations and the diplomatic corps of the participating Arctic Council countries: Finland, Norway, Canada and the United States. The operator was the Roscongress Foundation.

Triniti has developed a unique family of laser complexes that enable remote laser cutting of thick-walled structures at a safe distance of up to 300 meters from the target with a depth of cut of 440 mm. They can be used to aid in man-made accidents and to support urgent special operations. The fiber optic-based remote laser cutting process can be used to shred equipment such as steam generators, condensers and reactor vessels during the dismantling of nuclear power plants as well as to remove contamination after emergency leaks of petrochemicals in onshore and coastal zones.

Underwater laser cutting can be used to shatter radiation-contaminated metal structures from nuclear power plants in waste fuel basins, sunken ships, submerged port structural elements, and marine platforms for oil and gas exploration in the sea shelf (including the Arctic).