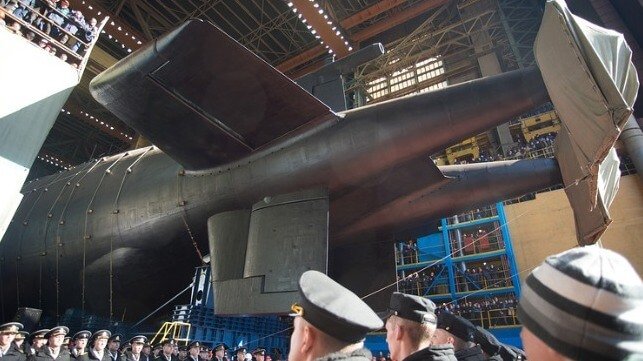 The Russian Navy has taken delivery of the world’s longest submarine, the research sub Belgorod. The 600-foot, twin-reactor, 24,000-ton submarine is designed to conduct subsea science with six Poseidon nuclear-armed torpedoes, making it the most heavily-armed “research” vessel in the world.

In comments at the delivery ceremony, Russian officials celebrated its groundbreaking scientific capabilities. According to shipyard Sevmash, the vessel is “designed to solve diverse scientific problems, conduct search and rescue operations, and can also be used as a carrier for rescue deep-sea and autonomous uninhabited underwater vehicles.” These vehicles could include the secretive spy submarine Losharik, believed to be used for interfering with subsea communications cables.

“The submarine Belgorod opens up new opportunities for Russia in conducting various studies, and it allows diverse scientific expeditions and rescue operations in the most remote areas of the world ocean,” said Commander-in-Chief of the Russian Navy Adm. Nikolai Evmenov.

Russian Navy submarine Belgorod, the largest sub built for 40 years and second only to the famous TYPHOON class (ref https://t.co/upHZRD6QuK) was commissioned today

Now in service with #Russian Navy

This will be armed with Poseidon and also spy subs. pic.twitter.com/xHBd2fX5zP

The Belgorod is the longest submarine ever produced, outstripping the length of the massive Soviet-era Typhoon class (though not the displacement). Like the Typhoon, Belgorod’s most prominent mission is nuclear warhead delivery. The compartment forward of her conning tower contains half a dozen Poseidon / Status-6 Oceanic Multipurpose Systems: nuclear-powered, nuclear-armed intercontinental torpedoes, the only weapons of their kind.

The Poseidon “doomsday” device is designed to travel up to 5,000 nm at a speed of 50-100 knots, transit to a harbor or near-coastal area, and detonate a nuclear warhead. The immediate effects of the explosion would be extreme, but the real objective would be to coat wide swathes of the surrounding coastline with radiactive fallout – an enduring and difficult-to-remediate hazard of underwater nuclear detonations. The submersible delivery method would circumvent (American) missile-defense capabilities.

To further its scientific mission, Belgorod is also equipped to serve as a mothership platform for research submarines, likely including the manned minisubs Russia uses for tampering with subsea fiber-optic cables. Russian activity near subsea cable runs has increased in recent years, raising concerns about the security of the data infrastructure that carries 95 percent of intercontinental internet traffic.