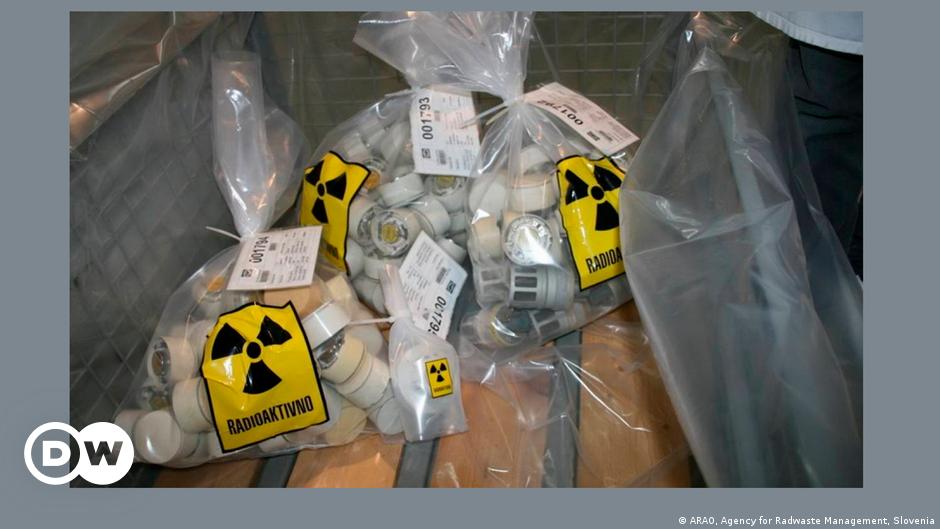 For several days now, Russian media and government representatives have been whipping up fears of a “dirty bomb” that they claim is being built in Ukraine. Russian Foreign Minister Sergey Lavrov declared that the Kremlin has “concrete information regarding Ukrainian scientific institutes having technologies which allow them to make a dirty bomb.” The Foreign Ministry has followed up with further accusations on Twitter and Telegram — alongside what it describes as “evidence” to support them.

A dirty bomb is the name given to a weapon of mass destruction consisting of a conventional explosive device that, when detonated, scatters radioactive material across the surrounding area.

“According to the information at hand, two organizations of Ukraine have been directly ordered to create the so-called #dirtybomb. The works are at their concluding stage,” the Russian Ministry of Foreign Affairs tweeted on October 24. It followed up with a second tweet: “The Kiev regime plans to camouflage the explosion of this kind of ordnance under an extraordinary effect of Russian low-power nuclear warhead that contains highly enriched uranium in its charge.”

The photos that Russia’s Foreign Ministry published in these tweets cannot prove the existence of a supposed dirty bomb in Ukraine. What the images show is something quite different to what is being claimed.

The ministry alleges that one of the photos is of a control room in the “Kharkov Institute of Physics and Technology.” However, a reverse image search leads not to Ukraine, but to Russia — to Gatchina, near St. Petersburg, to be precise. The very first hit shows that the exact same picture appears on the website of Russia’s state atomic energy corporation, ROSATOM.

Left: Photo of a Russian research reactor, accompanying a 2021 article on the ROSATOM website. Right: Russia’s Foreign Ministry used the same photo to claim that Ukrainian institutes are building a dirty bomb.Image: Twitter/strana-rosatom.ru

The photo appears in a report from February 2021 about Vladimir Putin’s opening of the PIK research reactor, which is described as “the world’s most powerful neutron source.” The state news agency TASS reported on the opening, as did the website atomic-energy.ru. They all use the same photo of the control room of the PIK reactor.

The photo does not, therefore, show the “Institute for Physics and Technology” in “Kharkov” (Kharkiv). It is of a research nuclear reactor in Russia.

The main “piece of evidence” presented in the Russian Foreign Ministry’s posts is a photo of clear plastic bags labeled with the word “RADIOAKTIVNO” and the radiation warning symbol. The ministry claims that this is evidence of the “development of ‘dirty bomb'” containing the radioactive substances “Uranium-235, Plutonium-239.”

Here, too, a reverse image search leads to older pictures, and a completely different source. The photos appear to have been taken in Slovenia, which explains why the bags are labeled “radioaktivno” — the Slovenian word for “radioactive.” In Ukrainian, “radioactive” is “радіоактивно.” Even if transliterated into the Roman alphabet, it would read “radioaktyvno,” not as on the plastic bags in the photo.

On Twitter, the Slovenian government has publicly attributed the photo to ARAO, the Slovenian nuclear waste agency. DW checked with ARAO, where a spokesperson confirmed that the agency had taken the photo in 2010.

“The photo used by the Russian Foreign Ministry in its Twitter post is an ARAO photo from 2010,” the Slovenian government has confirmed, adding that the picture had been “misused and used without the knowledge of ARAO.”

ARAO said in a statement that the photo shows a plastic bag of smoke detectors, which do not contain any of the radioactive substances the Russian Foreign Ministry lists underneath the photo. The photo was taken in a central nuclear waste storage facility near Ljubljana, and is documented here (page 3) and here.

And a third photo in the tweet is also of something quite different to what the ministry has claimed. The photo of a supposed “scientific research reactor” in Ukraine was actually taken in Russia.

Not a Ukrainian reactor: The original photo from the agency Diomedia is of the nuclear reactor Beloyarsk, in RussiaImage: diomedia/Twitter

Here, too, a reverse image search yields numerous hits, including one from a photo agency that describes the image in more detail. It is of the interior of the Russian nuclear power station Beloyarsk, near Yekaterinburg.

Several of the photos presented by the Russian Foreign Ministry as “evidence” are manipulative. They do not show parts of a dirty bomb in Ukraine dirty bomb, nor of the manufacturing of one, nor of places where such a bomb is being manufactured. Instead, these photos are of Russian nuclear power plants — and smoke detectors in Slovenia.

Tatjana Schweizer and Tetjana Klug contributed to this report.

This article has been translated from German.

The ruse with the dirty bomb: A sign of Putin’s weakness?

To view this video please enable JavaScript, and consider upgrading to a web browser that supports HTML5 video