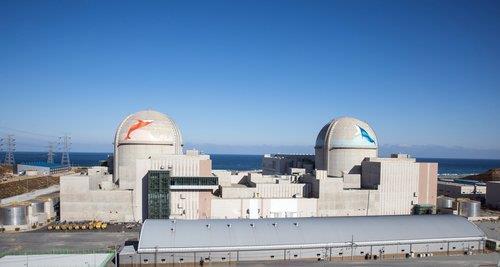 SEOUL, Dec. 14 (Yonhap) — South Korea on Wednesday held a ceremony to celebrate the completion of building a new nuclear reactor after 12 years of its construction, the industry ministry said.

The construction of the Shin Hanul No. 1 nuclear reactor began in 2010 in Uljin, 307 kilometers southeast of Seoul, and was completed in 2020. After years of testing, it began commercial operation last week as the country’s 27th nuclear reactor.

It was initially scheduled to begin commercial operation in 2017, but the plan was delayed due to an earthquake in the southeastern city of Gyeongju, according to the Ministry of Trade, Industry and Energy.

Wednesday’s ceremony drew some 500 local residents and related officials. President Yoon Suk-yeol canceled his attendance due to extreme weather conditions, according to his office.

The new reactor with a power generation capacity of 1,400 megawatts was built on the APR1400 technology, which is the country’s next-generation reactor model that boasts a larger capacity, a longer lifespan and cost effectiveness, according to the ministry.

The model was adopted for the South Korean-built Barakah nuclear power plant in the United Arab Emirates, it added.

“The new reactor is expected to contribute to our energy security and help boost our nuclear reactor exports,” the ministry said in a release.