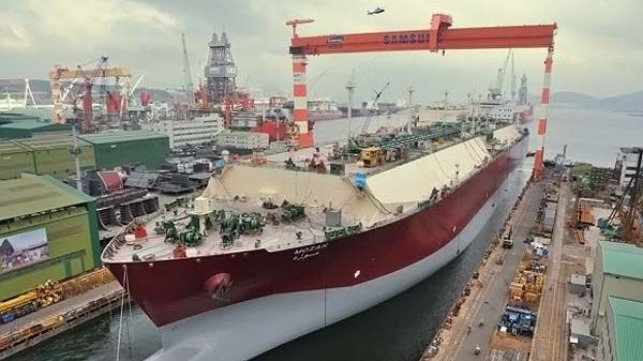 By Carmen Lillard On Jun 9, 2021
Share
Samsung wants to research nuclear power for the next generation of ships (file photo)

The South Korean shipbuilder Samsung Heavy Industries will conduct a joint research and development project with the Korea Atomic Energy Research Institute (KAERI) for the first modern research into nuclear-powered ships. As part of the strategic cooperation, they want to explore the possibilities of using nuclear power as a solution for climate-neutral shipping.

There was much interest in the use of nuclear energy for commercial shipping in the 1950s, but the technology never made any headway, partly due to safety concerns and economics. The United States built the first nuclear powered passenger cargo ship, the NS Savannah, as a demonstration ship in the late 1960s, which operated commercially in the late 1960s, while Japan and Germany also built nuclear merchant ships. While nuclear power was not advancing for merchant shipping, it became an important part of the world’s navies.

Samsung will be working with the much-discussed molten salt reactor (MSR), advertised as a safer, lightweight solution that would require less capital investment for the shipping industry. The concept is based on a design that uses lower quality nuclear material as opposed to weapons grade material needed in the reactors on board naval vessels. It also does not require the high pressure water cooling systems used in submarines and nuclear aircraft carriers. In the MSR design, the uranium fuel is mixed with a chloride salt and if a leak occurs in the system the mixture solidifies, reducing the risk of explosion and contamination.

Through the agreement, Samsung plans to enter the floating nuclear power plant and nuclear powered vessels market based on MSR as part of its future expansion of the new business. Research includes MSR element technology and related equipment development such as heat exchangers, offshore nuclear product design and business model development, performance review and economic evaluation.

Among the benefits Samsung sees for the technology is that the reactor lifespan is estimated at 20 years, as is the lifespan of the ship, which means the ship doesn’t need to be refueled. They point out that the size of the reactor is relatively small, so it has the advantage of being easy to use on ships. In addition, the MSR design offers a higher level of safety and would prevent serious accidents.