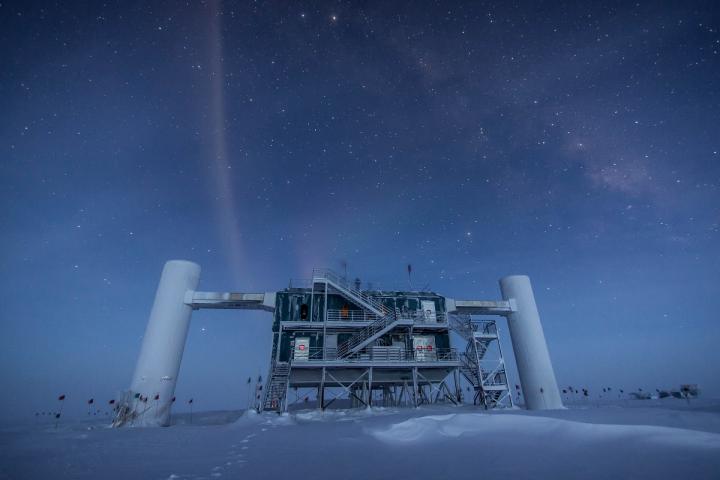 Scientists from the PN Lebedev Physical Institute of the Russian Academy of Sciences (LPI RAS), the Moscow Institute of Physics and Technology (MIPT) and the Institute of Nuclear Research of RAS (INR RAS) studied the directions of arrival of astrophysical neutrinos with energies higher than one trillion electron volts ( TeV) and came to an unexpected conclusion: all of them are born near black holes in the centers of distant active galaxies with strong radio sources. So far it has been assumed that only neutrinos with the highest energies are preserved in sources of this class.

It is believed that there are massive black holes in the centers of active galaxies in our universe. They are the heart of these objects with the luminosity of hundreds of millions of suns. Active galaxies, they are also “simple” quasars, are clearly visible from Earth with both optical and radio telescopes.

Formerly Russian scientists Alexander Plavin, Sergei Trotsky and the Kovalevs (Father and son, both Yuri) have found a connection between the origin of neutrinos with the highest energies (over 200 trillion electron volts, ie TeV) and radio quasars. This was quite surprising, as theoretical work from the 1990s indicated that astrophysical neutrinos would only be born at energies above 1000 TeV.

Neutrinos are tiny elementary particles with a mass barely above zero, but they can cross the universe without interacting with matter and without delays in their path. Millions of neutrinos per second pass every human being on earth completely unnoticed. To register neutrinos, an international collaboration of scientists has built a special ice telescope in Antarctica: the Cherenkov IceCube detector with a volume of 1 cubic kilometer. In Russia, INR RAS and JINR are currently completing the construction of the Baikal GVD water telescope in Lake Baikal, the volume of which has already reached 0.4 cubic kilometers. Data is now being recorded for the current part of the system that has already been commissioned. These installations examine the sky in different hemispheres: north and south.

After analyzing the data collected over a period of 7 years with the IceCube telescope, the scientists first decided to analyze a range above 200 TeV to investigate the direction from which these neutrinos came. It turned out that a significant part of them were born in quasars, identified by radio telescopes by their high brightness. More precisely, neutrinos were born somewhere in the centers of quasars. There are massive black holes that feed their accretion disks, as well as ultra-fast bursts of very hot gas. In addition, there is a connection between the strong radio emission bursts in these quasars and the registration of neutrinos by the Ice Cube telescope. Since neutrinos move through the universe at the speed of light, torches come to us at the same time as neutrinos.

In their new article published in the Astrophysical Journal, Russian scientists argue that neutrinos from energies in the ten TeV are also emitted by quasars. As a result, it turns out that all – well, almost all – high-energy astrophysical neutrinos are born in quasars. Note that there are also neutrinos that are born in the Earth’s atmosphere and even in the ice cube detector itself during the interaction of cosmic rays with matter.

“It is astonishing that different physical conditions are required for the production of neutrinos with different energies by a factor of 100-1000. The previously discussed mechanisms of neutrino production in active galactic nuclei only work at high energies. We have proposed a new mechanism for the production of neutrinos in quasars, which explains the results obtained. Although this is an approximate model, it is necessary to work on it to carry out computer simulations, “- says the chief researcher of INR RAS, corresponding member of the Russian Academy of Sciences Sergey Troitsky. The co-author of the LPI and MIPT discovery, corresponding member of the Russian Academy of Sciences, Yuri Kovalev, explained the results in the Hamburg Account on OTR program.

In September 2020, a consortium led by the Institute of Nuclear Research of the Russian Academy of Sciences received a three-year grant from the Ministry of Education and Science with an annual funding of 100 million rubles on the topic of “Neutrino and astrophysics of particles”. “Seven organizations have joined forces: INR RAS, JINR, LPI, MIPT, SAO RAS, SAI MSU, Irkutsk State University. Around 100 scientists will work to solve the problem of neutrinos formation and to study their properties. The project includes also other studies to understand the nature of high-energy astrophysical neutrinos, including finding photons of the same energy range in the Carpet-3 installation of the Baksan Neutrino Observatory, INR RAS (North Caucasus).

The connection between neutrinos and radio quasars has sparked great interest in the world. The joint work of Russian scientists with the ANTARES neutrino experiment in the Mediterranean begins. A recently published article by European and American scientists independently confirmed the Russian team’s discovery using radio telescope data in the United States and Finland. New events of the arrival of astrophysical neutrinos are now being tracked by the world’s largest radio telescopes and antenna arrays.

In 2021, Russian scientists will collect the first data from the Baikal GVD telescope and analyze it together with the data from RATAN-600 and the global radio telescope networks to study the centers of the quasars in detail. Lots of interesting things await us.

Disclaimer: AAAS and EurekAlert! are not responsible for the correctness of the press releases published on EurekAlert! by contributing institutions or to use information through the EurekAlert system.

Fact-check: Five claims about thorium made by Andrew Yang