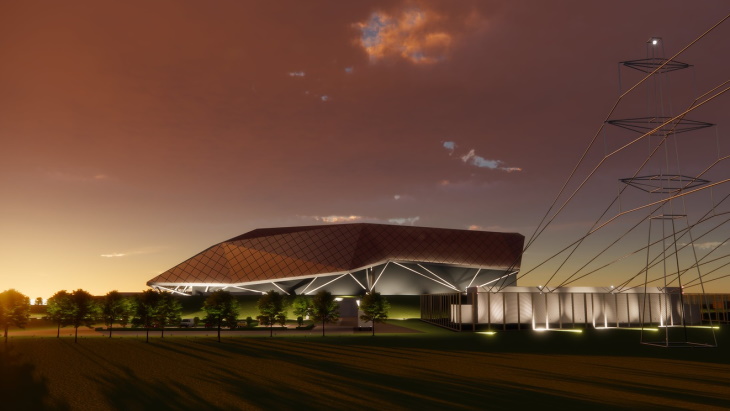 A Memorandum of Understanding (MoU) has been signed between Rolls-Royce SMR Limited and Sheffield Forgemasters to jointly explore commercial mechanisms for a long-term collaboration in the supply of forgings to Rolls-Royce UK’s small modular reactor fleet (SMR). A British SMR consortium led by Rolls-Royce plans to build up to 10 SMRs by 2035.

A rendering of a system based on the Rolls-Royce SMR (Image: Rolls-Royce)

The MoU was signed last week at the Nuclear Industry Association’s Nuclear2021 conference in London. It follows the founding of Rolls-Royce SMR Ltd, which was founded to advance and deliver the next generation of low-cost, low-carbon nuclear energy technology.

Rolls-Royce said the project “directly supports the UK civilian nuclear renaissance and the development of SMRs in the UK, with Sheffield Forgemasters being able to supply the complex, nuclear-grade demonstrator forgings as part of the regulatory process”.

“Sheffield Forgemasters is a global leader in complex, safety-critical forgings and castings, and we are incredibly fortunate that their experience supports and enables our SMR program,” said Tom Samson, CEO of Rolls-Royce SMR. “This agreement marks the beginning of an enduring partnership and reflects our commitment to the UK supply chain as we seek to rebuild and re-energize the vital UK nuclear supply chain.”

David Bond, CEO of Sheffield Forgemasters, added: “SMRs have the potential to become the standard for civil nuclear power generation and, as an emerging market, are an excellent match for our long history of supplying nuclear power components for the UK submarine program.

“With a new £ 400 million (US $ 530 million) investment fund to replace our defense-critical equipment, including the provision of a new 13,000-ton forging line and 19 state-of-the-art machining centers, we will be creating a much higher level of manufacturing capability and efficiency for the benefit of nuclear defense, but with obvious mutual benefits for civilian nuclear activities, including SMRs.

“Rolls-Royce is advancing plans for factory-assembled SMRs in the UK and Sheffield Forgemasters is well positioned to be a UK supply chain partner in the supply of complex, finished and semi-finished nuclear-grade components for the SMR construction program.”

According to Rolls-Royce, when fully operational, the Rolls-Royce SMR program will create 40,000 UK jobs mainly in the North and Midlands, where the bulk of UK nuclear expertise is located, with potential £ 52 billion in economic benefits from export.

Last month, Rolls-Royce SMR issued a letter of intent to submit its 470 MWe SMR design for inclusion in the UK’s Generic Design Assessment (GDA) regulatory process. The review of the SMR design – based on a small pressurized water reactor – will officially begin once the government has assessed the company’s ability and capacity to successfully enter the GDA process.

A British SMR consortium led by Rolls-Royce has set itself the goal of building 16 SMRs. The consortium – which includes Assystem, Atkins, BAM Nuttall, Jacobs, Laing O’Rourke, National Nuclear Laboratory, the Nuclear Advanced Manufacturing Research Center, and TWI – plans to complete its first unit in the early 2030s and expand to 10 units by 2035.

In order to minimize the construction phase of the program, the UK SMR is fully modularized so that the system can be transported by road, rail or sea. Aiming for a 500 day modular build, the consortium says this concept minimizes the time and on-site labor required to build and build the facility. Around 80% of the system’s components are sourced from Great Britain. The target cost for each station is £ 1.8 billion by the time five stations are built, with further savings possible. The power plants are built by the consortium before being handed over to electricity producers.