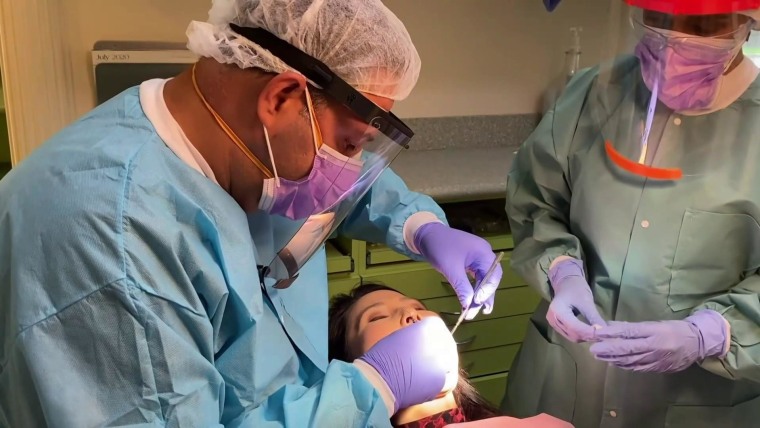 Imagine stopping a tooth cavity in its tracks with just a drop of liquid brushed onto the offending spot. No shots, drilling, anxiety or pain involved. The tooth is instantly stronger and less sensitive.

That option already exists — with some caveats — offering what dentists are calling a “fantastic” new tool, even though most people don’t know about it.

Silver diamine fluoride is a clear liquid that’s been used for decades in other countries, but has only recently been approved in the US

Besides being much less expensive than a traditional filling, it can be especially helpful for children, the elderly and other populations who may be more difficult to treat.

“Anytime I don’t have to pick up the drill, patients are happy.”

We apologize, this video has expired.

dr Amr Moursi, chair of the pediatric dentistry department at the New York University College of Dentistry, called it “potentially such a game changer.”

“You simply just put this drop of liquid on a cavity and within a matter of a few minutes, we see the surface that was kind of soft and spongy become firm and hard,” Moursi said.

“It gets people out of pain and it stops the progression of the decay process and buys us some time.”

What is silver diamine fluoride?

SDF was approved by the US Food and Drug Administration to treat tooth hypersensitivity in 2014, but has increasingly been used “off-label” in children and adults to stop decay.

Middle age the liquid doesn’t require any tooth preparation with a drill or numbing with a needle, so it’s painless and easy — a key benefit for squirmy kids or anyone else who hates drilling or shots.

“Aside from fluoridated water, silver diamine fluoride may be the single greatest innovation in pediatric dental health in the last century,” said Dr. James Nickman, a dentist based in St. Paul, Minnesota, and past president of the American Academy of Pediatric Dentistry.

It’s also an important option for people who have a difficult time getting to a dentist or tolerating conventional dental care, including older adults in nursing homes, cancer patients undergoing chemotherapy, or people with intellectual or developmental disabilities.

The average application fee per tooth is $20-$25, according to the Association of State and Territorial Dental Directors, or about one-tenth the cost of a traditional filling. Many dental insurance companies reimbursed for it and at least half of state Medicaid plans now do as well, Moursi said.

SDF is applied by a dentist. Some states also allow dental hygienists to apply it.

How effective is it?

SDF kills the bacteria causing the cavity on contact and provides the extra benefit of strengthening the tooth in the area where the cavity started, Messina said. That spot will no longer be sensitive to cold, sweet or crunchy foods.

The liquid safely and quickly stops the decay in about 80% of treated lesions, studies have found.

“It stops the cavity from progressing. It doesn’t make it better, but it does keep it from continuing to grow larger and deeper where it can get into the pulp where the blood vessels and nerves are,” Moursi said.

SDF can be applied to cavities on all tooth surfaces, including decay that can start on the roots of the teeth when gums recede.

The experts differed in their views on what additional treatment would be needed next.

Moursi advised reapplying SDF to the cavity at least every six months to maintain the arrest of the decay process until a filling, crown or other definitive care could repair the cavity.

But Messina said one application with SDF would suffice and be enough treatment for some patients, unless the decay grew. If the cavity left a sizeable hole, a filling might still be required to create a smooth, properly shaped tooth again, he added.

What are the drawbacks?

The main downside is the liquid will turn the cavity permanently black, an aesthetic problem that would be particularly visible in any front teeth. But any healthy part of the tooth would not be affected by this color change. SDF applied to a cavity on a baby tooth would also not affect the color of a permanent tooth that will replace it.

For many people, stopping the pain and avoiding the drill may be a reasonable tradeoff for a dark spot — especially in the back teeth, the experts said.

How can your cavity be treated with SDF?

Ask your dentist directly whether you’re a good candidate for it, but don’t be surprised if he or she doesn’t bring it up on their own. Almost 80% of dentists surveyed by the American Dental Association in 2017 said they had never used silver diamine fluoride.

Pediatric dentists are more aware of the treatment than general dentists, Moursi said. Indeed, a 2019 national survey of pediatric dentists found almost a third used SDF often to stop decay in primary teeth, and 87% expected to use it more in the future.

The push for more aerosol-free dentistry during the coronavirus crisis will likely make the treatment more popular, the experts said. When the ADA recently asked dentists if they were implementing more non-invasive cavity management techniques than before the outbreak of COVID-19, 16% said yes to SDF.

It’s always important for a dentist to examine the tooth and determine whether silver diamine fluoride is the right treatment, Moursi said. If it is, it should be part of a plan, he added.

“It’s a paradigm shift for dentists as well, but it’s something that offers such an opportunity,” Messina said. “It’s not perfect. Nothing is the ‘be all, end all, fixes everything’ answer, but it certainly gives us some things that we weren’t able to do before.”

Iran Is Only Weeks Away From a Nuclear Bomb