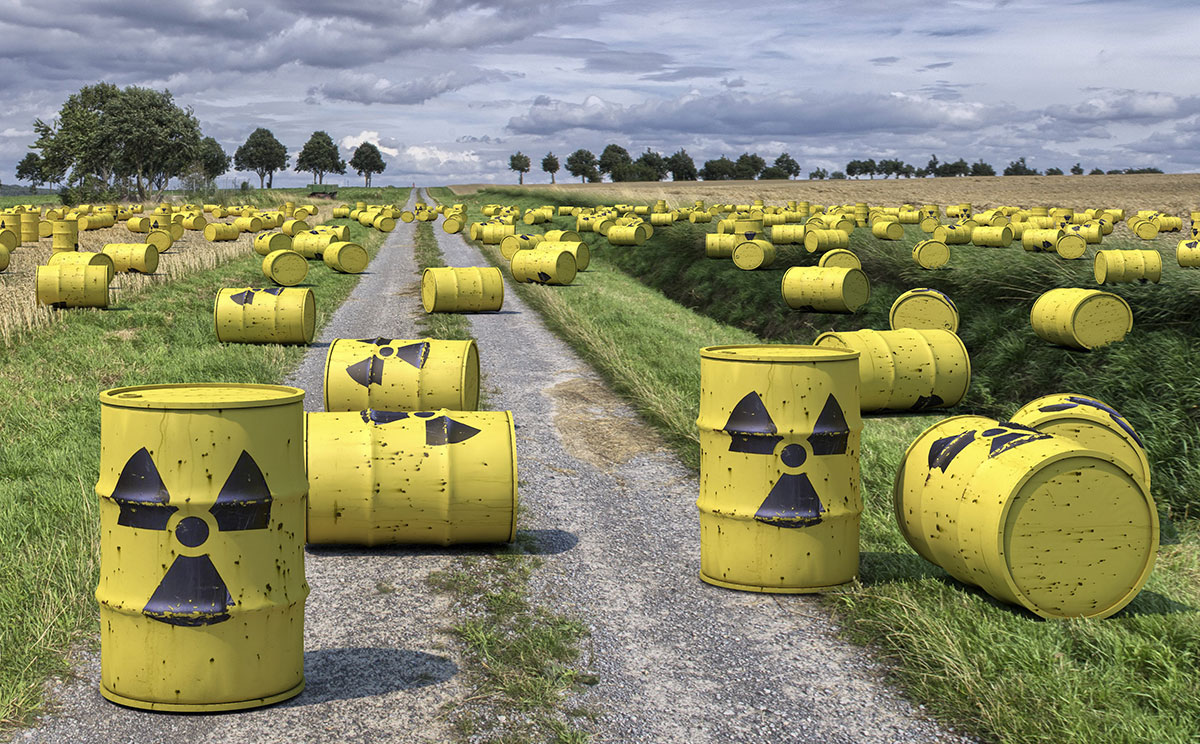 Once again it’s time to open up our mailbag for students. Today we’re going answer questions from students of all ages from all walks of life, sent in from all over the world. And if you’re a student yourself, you can do this too — just listen until the end to find out how. Today’s questions cover infrasound to enhance horror movies, the miraculous claims attributed to Padre Pio, whether oysters are vegan, how we can protect people thousands of years in the future from today’s nuclear waste, and finally, whether wearing yellow-tinted glasses can protect your eyes from damage from using screens. Let’s get started!

My name is AJ Rodriguez from Bakersfield, CA. I have heard that infrasound (inaudible sound below 20 Hz) has been used in horror movies to increase fear in moviegoers. Is there any scientific basis for this?

There may well be. In the most famous such experiment, researchers in 2003 designed a controlled study where 750 people heard four pieces of music in a concert hall, some of which were accompanied by inaudible infrasound at 17 Hz. Sure enough, a statistically significant percentage of the audience — 22% — reported increased feelings of unease, sorrow, chills down the spine, or even worse feelings such as nervousness, revulsion, and fear when the infrasound was present.

But has this been done successfully in the wild? No. A movie theater’s subwoofers — or indeed any commercially available subwoofers — cannot come close to the infrasound levels needed to show an effect in these studies. They required a gigantic specially designed acoustic pipe seven meters long.

Hi Brian, my name’s Bernard and I’ve got a topic that I’m not sure you’d touch with a bargepole to be quite honest. Tonight I was watching on Unsolved Mysteries a story about Father Pio and it really started to hit a lot of notes that we talk about to be Skeptoid of, and I’d really be grateful if you could have a look into it for me.

Padre Pio (1887 – 1968) is a famous Catholic saint. All sorts of miracles are attributed to him, both during and after his lifetime. He was most famous for his stigmata, wounds on the body (most notably on his palms) corresponding to the crucifixion injuries of Jesus. We’ve actually mentioned him here on Skeptoid before, back in episode #126 on incorruptible corpses — bodies that do not decompose after death but remain lifelike, generally with some alleged divine cause. The Catholic Church lists Padre Pio as an incorruptible, even though by their own admission his body was badly decomposed when it was exhumed for display, and today a silicone reproduction is shown. And this one tidbit is a fair metaphor for everything about Padre Pio.

It’s not my practice to criticize belief systems here on Skeptoid, only factual claims that can be proven or disproven through science. There is no implied criticism of Catholic religious beliefs in pointing out that virtually everything about Padre Pio has been found to be fraudulent, and not just by outside investigators, but by some of the Church’s own investigators too. In 1919, an emissary was sent from the Vatican to check out reports of healings and other miracles attributed to Padre Pio, and found that every single one of them was bogus.

Much has been written about this; whole books have been devoted to debunking the claims of Padre Pio. This is to be expected, as any Catholic saint is (almost by definition) a controversial figure and is going to draw both passionate critics and passionate supporters, regardless of the merits. What counts is what the findings are and their validity. There’s no record of anyone actually observing Padre Pio self-inflict his stigmata, but he was known to keep and frequently request resupply of bottles of carbolic acid, a few drops of which produce a gory wound on the skin. He spent most of his life wearing fingerless gloves to keep his palms out of sight, consistent with someone who’s tired of putting acid on his hands — hands which were, at his death, found to be entirely injury-free. Many of his writings describing mystical experiences he’d had were later found to be plagiarized word-for-word from an earlier stigmatic, Gemma Galgani, and so we know for a fact that those claims did not reflect any experiences he’d actually had. The examples go on and on.

Did Padre Pio also make true miracles happen? Well, maybe he did; but if we believe that, we’re forced to consider why he would have also faked so many others.

So what you’re asking here really isn’t a science question; it’s a marketing question. Vegan is not a scientific term, it’s a word used to define a segment in the food marketing industry. This is handled differently in different countries, but in the United States, private companies arose to take advantage of this and sell their own self-styled certifications to food producers to assist them in promoting their products to customers who choose vegan diets. The certification is not official or legal, it’s purely marketing. Chief among these is Vegan Action, a 501(C)(3) nonprofit. Under their criteria, oysters are no way, nohow considered vegan. Products they certify contain “no animal ingredients or animal by-products, [use] no animal ingredient or by-product in the manufacturing process, and [are] not tested on animals.”

However, outside of this commercial context, different people may use the term vegan to refer to different things. Some may choose to apply it to products containing nothing from animals that have brains and/or feel pain, as you describe. To others it may not mean that. So, truthfully, there’s no hard-and-fast answer to your particular question. Without a strict scientific definition for what vegan means, it turns out to be a matter of personal preference.

Hi Brian, my question is how do we warn people in the future not to open our containers of nuclear waste? I mean, we don’t know what language they’re going to speak, or if they’re even going to be us. All the best, Rich Cattle.

So this is a question that scientists have been wondering about for a long time. The field actually has a name: nuclear semiotics, referring to durable, language-agnostic symbology that could be used to warn some future party about the danger. This decades-old conversation even has its own Wikipedia page. Throughout the 1980s and 1990s, various international teams made all sorts of proposals and reports for how this message could be reliably communicated tens of thousands of years in the future.

But in the opinion of this writer, it’s one of those questions that’s more of an interesting, speculative thought experiment than it is a realistic problem in need of a serious solution. It’s like wondering “How do I keep aliens from beaming into my living room and stealing my TV,” which is also a difficult problem to solve, but probably one that we don’t need to worry too much about. I say this because all signs are that nuclear waste is a temporary problem — albeit a thorny one.

While it’s true that most nuclear power plants under construction today are still the same basic 60-year-old open fuel cycle design that produce radioactive waste, those on the drawing board are closed fuel cycle reactors that can consume the most dangerous components of existing radioactive waste. So far China is the only nation actively developing these so-called Generation IV designs, such as the liquid fluoride thorium reactor, of which they already have several under construction. (For a complete rundown on these, see episode #555, Thorium Reactors: Fact and Fiction.)

Combined with the fact that technology for reducing and recycling existing nuclear waste continues to proceed — including options like simply diluting it into the oceans at levels far below the natural background, and even depositing it into subduction zones where nobody would be able to get to it even if they tried — my opinion (not presented as fact) is that such waste will be a historical footnote within a century or two, long before we have to worry about semiotics.

Hello Brian, this is Tim. I understand that UV light is harmful to our eyes, but lately I’m seeing advice from optometrists that anyone who’s in front of a computer screen for long periods should wear yellow tinted glasses to protect against blue light. I understand blue light interferes with being able to sleep, but is there any validity to blue light damaging your eyesight?

Wherever there is a product that can be sold, you can be assured that plenty of people will come up with plenty of reasons to sell it. Glasses claiming to block blue light from computer screens are the perfect example.

The American Academy of Ophthalmology, the world’s largest association of eye physicians and surgeons, has published a series of articles (like this and this) debunking virtually every claim you’ll find for such glasses. These include that blue and ultraviolet light from your computer screen will harm your eyes over time, both by retina damage and eye strain. The products have been successfully marketed, in part by misrepresenting a published study that retinal — a form of Vitamin A found in your eye — can damage cells when overexposed to powerful blue light. However nothing in the study was relevant to eyesight; that association was just marketing spin by the people selling these glasses.

Yes, overexposure to blue light and ultraviolet can indeed damage your eyes; but computer screens produce no measurable UV and the normal amount of blue light they produce is not harmful. Eye strain is real and has a number of causes, but blue light is not among them. To avoid it, sit the proper distance from your screen or use glasses to help you comfortably focus. Blink regularly. Follow the 20-20-20 rule: Every 20 minutes, look at something 20 feet away for 20 seconds. You’ll be just fine. Conversely, if you buy the yellow glasses but don’t do anything else to avoid eye strain, you’ll be just as susceptible as you were before.

So teachers, if you’ve got a classroom full of students — particularly if that’s a virtual classroom — let’s hear from your students. Use the Teachers Toolkit, which is our free platform for sharing collections of Skeptoid podcast episodes to a classroom full of students in a free, secure, anonymous, and accessible way. Have your students listen to some episodes in the field you’re currently teaching, and then get them to send some questions to be answered right here. In some cases I can even have the episode come out on a specific date that you request. It’s completely free and a great way to share Skeptoid with a classroom, and maybe make it an extra credit opportunity. For all the details, just come to skeptoid.com and click Answering Student Questions.