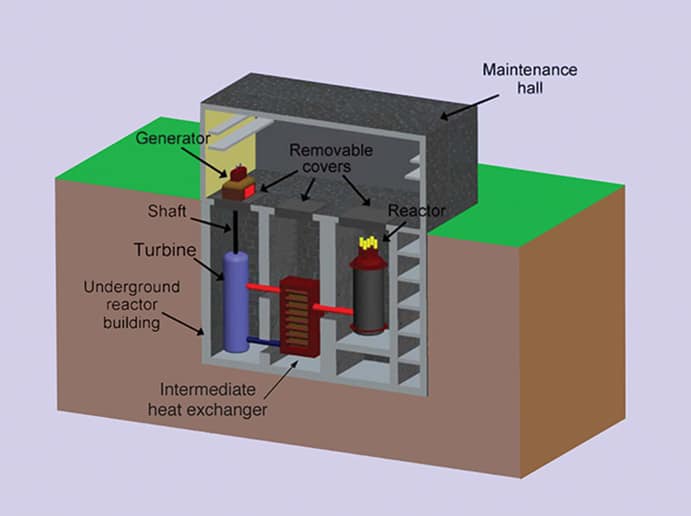 Light water cooled pressurized water reactors (LPWR) will likely be the first small modular reactors (SMRs) to go into commercial use, but they are far from the only type of SMR in development. Several research groups and private companies are also examining alternative nuclear technologies for their potential in smaller reactors.

These alternative reactors generally belong to the so-called Generation IV category. Because they are in an earlier stage of development, they are unlikely to be operational before the 2030s or 2040s.

Artist’s impression of the U-Battery concept

Stable salt reactor
A reactor being developed by the British private company Moltex Energy is known as a stable salt reactor (SSR). As the name suggests, this technology uses a flowing molten salt as a key component of the reactor, but it is quite different from the liquid fluoride thorium reactor (LFTR) normally associated with molten salt technology.

While an LFTR uses nuclear fuel that is dissolved in the molten salt and flows around the reactor, the fuel in the SSR is stationary and is held in fuel rods like in a conventional reactor. The fuel – based on typical low-enriched uranium or even spent fuel elements, which are currently treated as waste – is dissolved in a molten salt which, according to Moltex, improves the burn rate. The fuel rods are immersed in another molten salt, which serves as the primary coolant in the reactor. An important factor for the safety of the SSR is that the fission products cesium and iodine which occur in gaseous form in water-cooled reactors remain bound in non-volatile salts in the fuel element.

This coolant salt is not pressurized and does not react with air or water, which gives it an advantage over molten alkali metals, which are used as coolants in breeder reactors. This has two advantages, according to Moltex: it eliminates potential hazards and avoids costly pressure vessels that require specialized foundries, making the SSR better suited for factory production.

The output of an SSR can be between 150 MWe and 1.5 GWe, depending on the size of the reactor core; Since the core is modular, multiple modules can be added to produce the required power.

U battery
Another British design comes from U-Battery. A concept is being developed that arose from research at the University of Manchester, the Dalton Institute and the Technology University of Delft in 2008.

The U-battery is a type of gas-cooled reactor known as a pebble bed. Its core is not enclosed in rods, but filled with spherical fuel pellets known as TRISO fuel (tristructural-isotropic). These are almost 1 cm in diameter and have a uranium core surrounded by a layer of low-density carbon, which in turn is surrounded by silicon carbide, and an outer layer of high-density carbon.

Warnings and signposts from the case of blocking EU sanctions – Law360