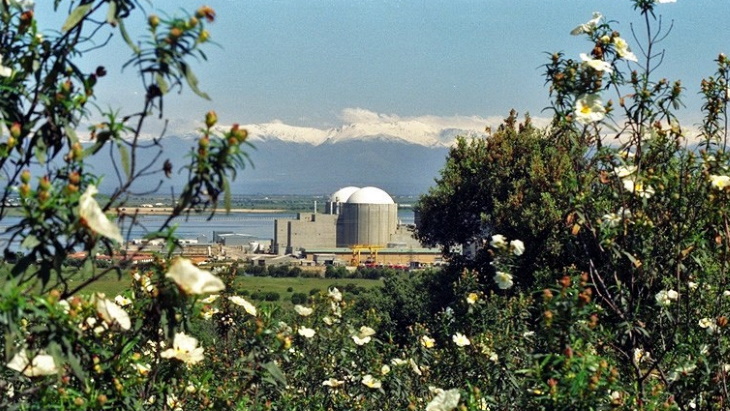 The Spanish Council of Ministers yesterday approved the tender for a contract to the decommissioning and disposal company Enresa to design, support the licensing, manufacture and supply of a storage system for used nuclear fuel for use in the Almaraz, Ascó, Cofrentes and Vandellós II power plants. The order volume is up to EUR 220 million (USD 260 million).

At the Almaraz plant, additional interim storage capacities for used fuel will be required before decommissioning (Image: CSN)

At present, all nuclear power plants in Spain – with the exception of Vandellós II – have location-independent interim storage facilities for used fuels. In addition to the existing facilities, new interim storage capacities must be put into operation in all production sites except Trillo by 2026. These new dry storage facilities have welded metal canisters that are encased in concrete.

Enresa said the upcoming tender will include the supply of a dry storage system for used fuel, which will be produced at the Ascó, Cofrentes and Vandellós II plants from 2026. At the Almaraz plant, the new system will allow fuel to be withdrawn from its storage pools after the final shutdown of its two units, which is planned for 2027 and 2028 in preparation for the dismantling of the plant.

The new storage systems will have the same design for all plants and will be subject to a single approval process. Enresa said this will translate into savings thanks to economies of scale and sharing of auxiliary equipment and parts, common procedures and training.

“To implement these solutions, it will take five years from the start of the tender to commissioning in 2026, according to the schedule provided in the tender,” said Enresa.

The new storage facilities will be compatible with all interim storage strategies of the new General Plan for Radioactive Waste (GRWP), which is currently being revised. The GRWP is a document that defines the strategies and activities to be carried out in Spain in relation to the management of radioactive waste, the decommissioning of facilities and the economic and financial analysis of these activities. It is approved by the Council of Ministers and is regularly reviewed and updated.

The Trillo nuclear power plant has been using a barrel storage facility since 2002 to temporarily store the plant’s consumed fuel. The system has concrete walls and roof and can hold up to 80 multi-purpose containers (for storage and transport).

An interim storage facility has also already been built on the premises of the José Cabrera plant, which is designed for the dry storage of all waste fuels unloaded from the reactor. Its construction was decisive for the dismantling of the plant, which was shut down in 2006. In this system there are 12 modules loaded with waste fuel and four additional additional containers with the most radioactive pieces of metal from the segmentation of the reactor internals.

An interim storage facility for dry storage of the waste fuel unloaded from the two reactors was built at the Ascó plant. It consists of two panels made of reinforced concrete with a capacity of 16 storage modules per panel.

Enresa found that used fuel stored in the on-site interim storage facilities will eventually be transferred to a central storage facility. Villar de Cañas in the central province of Cuenca was officially selected as the location for the central warehouse (CTS) in December 2011. In July 2015, the Council for Nuclear Safety determined that the site is a suitable location for a national storage facility for high-level waste. The CTS is designed for a service life of 100 years, although the current GRWP provides for an operating time of 60 years.

DevOps is still “rarely well completed on a large scale” after a decade of research. • The Register