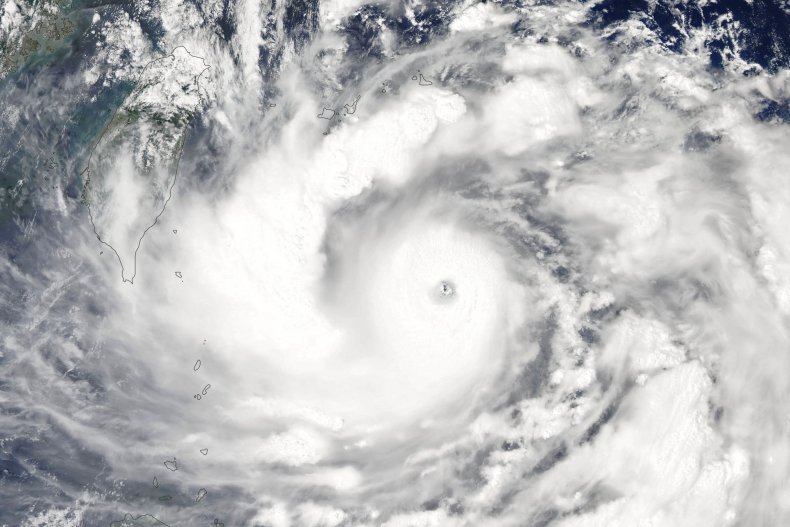 The most powerful storm in South Korean history is due to a collision with a nuclear power plant.

According to the South Korea Meteorological Administration, Super Typhoon Hinnamnor is due to hit on September 6, and may cause multiple casualties. Kori Nuclear Power Plant, which is in the oncoming path of the Category 5 storm near to industrial city Ulsan, has lowered the run rates of three of its nuclear reactors to less than 30 percent in preparation for the typhoon, according to EnergyVoice.

“We’re now entering a phase where we have to minimize casualties,” Han Sang Un, the chief forecaster at Korea Meteorological Administration, said during a briefing on September 5.

“It’s a massive typhoon with a 400-kilometer (248.5 miles) radius, which is big enough to cover Seoul to Busan. Most regions in Korea will experience intense rain and wind,” he said.

A picture of Hinnamnor taken on September 1, 2022, the Moderate Resolution Imaging Spectroradiometer (MODIS) on NASA’s Aqua satellite. The storm is passing by Taiwan (top left), and heading northeast towards the Korean peninsula.
NASA Earth Observatory/Lauren Dauphin

Typhoon Sarah, which hit South Korea in 1959, and Typhoon Maemi, which hit in 2003, are thought to be two of the most powerful storms in the nation’s history. Hinnamnor is forecasted to be potentially more powerful. As of September 5, the storm had wind speeds of 127 miles per hour (mph) with gusts around 155 mph, according to the US Joint Typhoon Warning Center.

“Super typhoons are defined as a typhoon in the NW Pacific Ocean basin with 1-minute sustained winds of at least 130 kts (150 mph), which is equivalent to a strong Category 4 or Category 5 on the Saffir-Simpson hurricane wind scale, ” dr Adam Lea, a senior research associate in hurricanes, typhoons and tropical cyclones for University College London’s Department of Space & Climate Physics, told Newsweek.

“The overall diameter of the storm can be hundreds of km but the very damaging winds are confined to a much smaller region surrounding the eye called the eye wall, which is a ring of thunderstorms surrounding the eye where the most extreme conditions occur. This area typically extends to 100km [around 60 miles] from the eye. Hinnamnor is one of the larger typhoons with typhoon force winds extending up to around 140km [around 85 miles] from the center.”

The Kori Nuclear Power Plant, which is in the path of the storm, may therefore be at risk if the typhoon hits it at full power.

Natural disasters of this kind are historically very bad news for power plants: the Fukushima Daiichi nuclear plant in Japan was severely damaged by a tsunami caused by a 9.0-magnitude earthquake in 2011, leading to some 150,000 people to be evacuated from the communities close to the disaster site.

According to Lea, a super typhoon hitting land at peak intensity would cause extreme to catastrophic damage to most buildings not built to resist such winds. However, typhoon Hinnamnor has weakened considerably from its peak intensity.

“I am not knowledgeable on nuclear power plants, but the buildings are very sturdily constructed and will withstand the winds comfortably,” he said. “In advance of typhoon Maemi in 2003, five nuclear plants were shut down automatically and were ultimately unaffected.”

The typhoon is forecasted by the South Korea Meteorological Administration to hit the resort island of Jeju at about 1 am local time on September 6, and southern coastal cities including Ulsan and Busan at about 7 am Residents have been advised to remain indoors, and according to Bloomberg, 200 residents in coastal areas of Busan have been asked to evacuate to shelters on September 5.