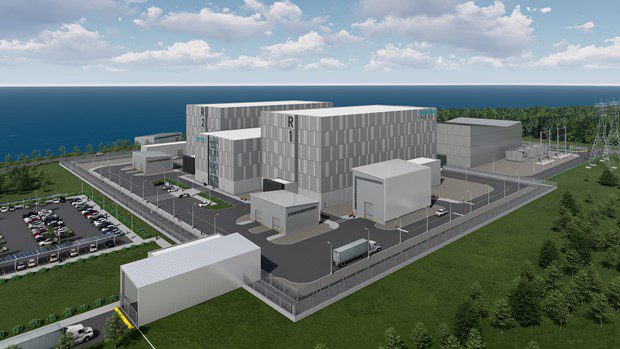 Terrestrial Energy has unveiled an upgraded 390-MWe design of its Integral Molten Salt Reactor (IMSR) power plant to meet utility requirements and boost its cost-competitiveness as part of an effort to ramp up its candidacy for deployment at Ontario Power Generation’s (OPG’s) Darlington Nuclear Generating Station. This week, the Canadian firm also announced a series of developments that could further its bid to commercialize the Generation IV small modular reactor (SMR) technology and begin operating its first plan by 2028.

Simon Irish, CEO of the Oakville, Ontario–based technology developer, said Terrestrial’s upgraded IMSR power plant design, the IMSR400, pairs two 195-MWe IMSRs. It draws on technology “developed and demonstrated over many decades,” but it “has the efficiency, economics, and flexibility to play a major role in the clean energy transition including the production of clean hydrogen at industrial scale,” he said.

An illustration depicting Terrestrial Energy’s newly unveiled IMSR400 power plant in the configuration proposed for the Darlington site in Ontario. The IMSR400 can generate 390 MWe (net) on a seven-hectare site. Courtesy: Terrestrial Energy

ace POWER has reported, Terrestrial’s IMSR uses a molten fluoride salt—which is a highly stable, inert liquid with robust coolant properties—for its primary fuel salt, as well as in a secondary coolant salt loop (without fuel). Notably, however, while the nuclear reactor design derives heavily from Oak Ridge test reactors, it also borrows an “integral” architecture concept from the lab’s small modular advanced high-temperature reactor (SmAHTR)—which means all its primary reactor components, including the graphite moderator, are integrated into a sealed and replaceable reactor core. This so-called “Core-unit” has an operating lifetime of seven years and is “simple and safe to replace,” Terrestrial says.

A Spotlight on Efficiency, Thermal Capabilities

Originally rolled out as a 195-MWe plant, the IMSR garnered industry fascination because it is a Generation IV molten-salt reactor that operates at 700C. It supplies its steam turbines with superheated steam at 600C, which potentially raises the system’s fuel efficiency to up to 48%.

ace Irish has explained to POWER: “A conventional reactor is stuck in the mid-30s, and if it’s a small conventional reactor, it may not achieve 30% at all,” said Irish. “If you operate at a much higher temperature, you can make power much more efficiently and you can do many more things with your nuclear reactor. You can provide high-quality industrial heat that can be used in industrial process applications that are very different compared to the steam generated electric power provision—which is pretty much the sole activity of nuclear energy today.” 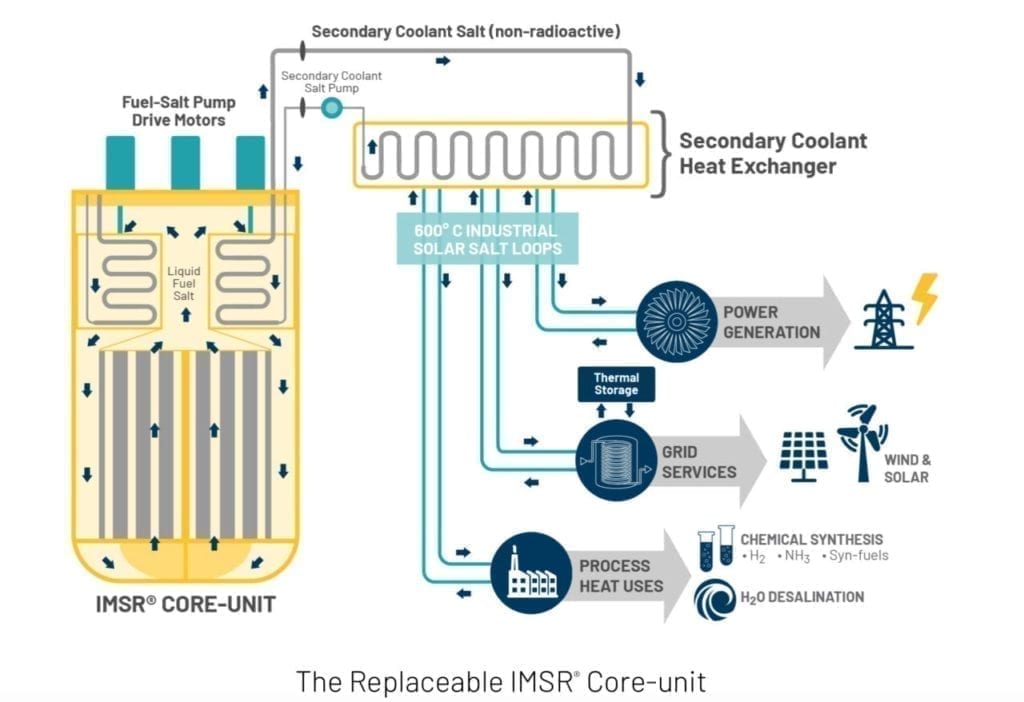 Terrestrial’s 195-MWe IMSR power plant is a thermal-spectrum, graphite-moderated, molten-fluoride-salt reactor system that uses standard-assay low-enriched uranium (less than 5% U-235) fuel. In the integral process—which takes place within the “Core-unit”—the fuel salt is diluted with coolant salt (consisting of fluorides such as sodium fluoride, beryllium fluoride, and/or lithium fluoride), and the mixture serves both as fuel and primary coolant. The mixture is pumped between a critical, graphite-moderated (thermal spectrum) core, and then through the integral heat exchangers to transfer its heat to the external secondary coolant salt loop. The secondary loop consists of bare diluent salts (without fuel salt added), and it, in turn, transfers its heat to another intermediate nitrate salt loop, which essentially serves as a barrier between the radioactive primary components and the end-users. The nitrate salt–heated steam generator finally produces steam that can be used for power generation or industrial applications. Courtesy: Terrestrial Energy.

The newly launched larger IMSR400 power plant, however, generates “electric power 50% more efficiently than conventional nuclear power plants that use water-cooled and moderated reactor technology,” the company claims. “With this 50% efficiency improvement, the IMSR400 has a reduced capital requirement and waste footprint, and improved economics per kWh of electricity for new nuclear power plants,” the company said.

Still, it is unclear how the new plant design will fit into regulatory reviews that are already underway. The company submitted its 195-MWe plant design to the Canadian Nuclear Safety Commission (CNSC) in 2016, and it has since cleared the Phase 1 Vendor Design Review process and is on track to complete Phase 2 “by early 2022.” However, the company has also engaged in pre-application activities with the US Nuclear Regulatory Commission (NRC) since October 2019, and recent filings with the agency reflect Terrestrial’s objective to obtain long-term licensing for commercial deployment of the IMSR400 in the US Terrestrial has said it will first need the NRC’s standard design approval ( SDA) for the IMSR core-unit under 10 CFR Part 52, Subpart E. The NRC and CNSC, notably, are also cooperating on the methodology and selection of postulated initiating events (PIE) for the IMSR design.

Timing is an essential consideration. A key reason is that OPG last year resumed planning activities to build an SMR of up to 300 MW as early as 2028 at its Darlington Nuclear Station in Clarington, Ontario—Canada’s only site that holds a preparation license for future new nuclear development, with a completed and accepted Environmental Assessment (EA). The utility’s indicative schedule assumes that the CNSC will issue a license to build by 2024, and a license to operate by 2027. Last October, meanwhile, OPG kicked off advanced engineering and design work for that project by choosing three SMR developers: GE Hitachi Nuclear Energy (GEH), Terrestrial Energy, and X-energy.

while OPG recently said it hasn’t yet “absolutely decided it’s going to be one of those three,” it anticipates picking a vendor at the end of this year (2021). Then, it will focus its efforts on “working with the developers to finish the necessary preliminary safety analysis and design information packages to submit a construction license application, in approximately 2022.” OPG says the 2028 operational timeframe for an SMR—presumably a first-of-its-kind deployment—is achievable, given the utility’s recent refurbishment of CANDU units at Darlington. “With one refurbished Darlington unit complete on-time and on-budget, we know we can execute complex projects with safety and quality,” it says.

The provincial utility in May emphasized the most important criteria it is considering to pick an SMR design (which will likely have a 60-year lifetime) is safety. “The SMR needs to have world-class safety features built directly into the design,” it says. “Additionally, we’re looking for a design that is low-cost and easier to operate—lowering electricity rates for Ontarians. Finally, we want a technology that we’re confident fits within the parameters of our EA.” However, the utility recognizes challenges: “When the EA was conducted, no technology was selected. Therefore, our environmental impact statement was prepared covering a range of potential reactor technologies available at the time. If we move forward with the construction of [Darlington], we will need to apply to the CNSC for a license to construct a specific technology. During this process, we will need to demonstrate the selected technology would not fundamentally alter the conclusions of the EA,” it says.

Terrestrial has stiff competition. X-energy, a prominent winner of US Department of Energy’s (DOE’s) Advanced Reactor Demonstration (ARDP) program, already has a prime contract with the agency worth about $1.23 billion to build a commercial four-unit power plant based on its Xe-100 reactor design, an 80-MWe/200-MWth (565C steam) pebble-bed high-temperature gas reactor. Under the ARDP, X-Energy is looking to begin operating a 320-MWe “four-pack” project in Washington State in 2027. The DOE’s funding will also support X-energy’s delivery of a commercial-scale fuel fabrication facility for its proprietary TRISO-X fuelwhich is developed under the 2015 DOE Advanced Gas Reactor Fuel Qualification Program. Presumably to boost its prospects at OPG, X-energy on Sept. 16 also said it is collaborating with Canadian uranium supplier Cameco to explore “possible areas of cooperation to support the potential future deployment, fueling and servicing” of Xe-100s in Canada and the US

GEH President and CEO Jay Wileman, meanwhile, told POWER in June his company’s BWRX-300 SMR can be deployed by as early as 2028. The BWRX-300’s candidacy at Darlington is boosted by GEH’s technology and “certainty,” he said. The BWRX-300, derived from the Economic Simplified Boiling Water Reactor (ESBWR) design, benefits from established construction development expertise. “Our target is to be under $3,000/kW and a capital cost of around $1 billion dollars—and that’s a lot more workable on some of our customers’ balance sheets than some of the builds that are going on here in the US today,” Wileman said. Another bonus: The BWRX-300 design uses an existing fuel design manufactured by Global Nuclear Fuel (GNF), a GE-led joint venture with Hitachi, and it benefits from a proven component and supply chain. All of that positions the BWRX-300 to become the “lowest-risk, most cost-competitive and quickest to market SMR,” Wileman said.

Terrestrial says one edge it offers is that the IMSR400 uses “nuclear fuel at standard enrichment,” making it “the only Generation IV SMR power plant designed to do this today.” That aspect avoids “the considerable cost and time of re-licensing uranium enrichment plants and removes hurdles to commercialization, hastening deployment.”

In another first for a Gen IV SMR, Terrestrial on Aug. 17 entered into an agreement with Westinghouse and the UK’s National Nuclear Laboratory to provide the IMSR’s nuclear fuel supply. This week, it also entered into an agreement with French global nuclear fuel cycle company Orano for a broad scope of services. “The agreement’s broad scope of services includes uranium enrichment, chemical conversion to IMSR fuel form, its production, transportation, packaging, and logistics,” the company said. The agreement, notably, also covers “analysis for full-scale commercial production and supply of IMSR fuel.” It will apply to major markets that Terrestrial has identified for potential IMSR power plant deployment, including Canada, the US, the United Kingdom, and Japan.

As the only Canadian firm in the Darlington contest, Terrestrial is meanwhile also poised to help address several recommendations laid out in Canada’s December 2020 – issued SMR action plan. Those recommendations include waste management, regulatory readiness, and international engagement, as well as developing coordinated procurement through cohesive supply chains.

The significance of Canada’s SMR action plan is that “it demonstrates the need for SMRs, these very distributable, scalable clean heat and electricity sources in numerous parts of our economy and in important parts of our society,” as John Gorman, President and CEO of the Canadian Nuclear Association (CNA), told POWER. A crucial factor for SMR uptake, however, will depend on public approval, he noted.

But Terrestrial appears to be making in-roads there, too. On Sept. 28, it announced a memorandum of understanding with Saskatoon-based First Nations Power Authority (FNPA)—the only North American, non-profit, indigenous-owned and controlled power developer—to explore development of SMR technologies to benefit indigenous communities in Canada.

“The Canadian nuclear energy industry recognizes the importance of early engagement with all the communities involved in the long life-cycle operations of a nuclear power plant, and that is particularly true for Canada’s many indigenous communities,” said Terrestrial’s Irish. “The FNPA will advise Terrestrial Energy and its Canadian operations as it engages and consults with these communities on the ecological, environmental, and economic value of IMSR power plant deployment, and we value the FNPA’s involvement.”

Explained: What is FCRA, the law which led to Congress Rajiv Gandhi Foundation getting its license revoked? – FreePressJournal