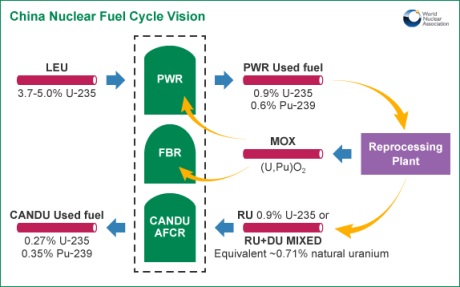 The new joint venture agreement for the development of Advanced Fuel CANDU Reactor (AFCR) is a clear step towards building new CANDU units, even if thorium takes a backseat in uranium recycling, writes Ian Hore-Lacy, Senior Research Analyst at the World Nuclear Association.

This confused many people at the time, although a characteristic of them is that they use natural uranium fuel (without any enrichment). As of 1998, these CANDU-6 units were sold by Atomic Energy of Canada Ltd. (AECL) as phase III of the Qinshan nuclear power plant near Shanghai was built on schedule and within budget. They were put into operation in 2002 and 2003 and each deliver 678 MWe net. They have worked well since then.

In 2005, 2008 and 2012, AECL and its successor Candu Energy signed a series of technology development agreements with CNNC and its staff to research advanced fuel cycle technologies such as the recycling of recovered uranium from used PWR fuel and the use of thorium. The first commercial demonstration of the first took place in Qinshan Unit 1, using 12 fuel bundles containing recycled uranium (RU / RepU) mixed with depleted uranium (DU) to give natural uranium equivalent (NUE), similar to normal natural uranium candu fuel. It behaved just like natural uranium fuel.

A Joint Venture Framework Agreement was then signed that month between CNNC and Candu Energy to set up AFCR projects domestically and develop opportunities for this technology internationally. While the base technology is Canadian, research and development at Qinshan since 2008 has turned a simple concept into a technology that can now be exploited so that the spent fuel from four conventional PWR reactors can fully feed an AFCR unit (as well as recycled plutonium for MOX)). This means a significant reduction in the task of managing used fuel and disposing of high-level waste, as well as a significant reduction in the need for fresh uranium in China.

The AFCR is described as “a 700 MW Class III to Class III reactor based on the hugely successful CANDU 6 and Enhanced CANDU 6 (EC6) reactors with a number of adaptations. [allowing] recycled uranium or thorium is used as fuel. “The current focus is on uranium, which is recycled from conventional used fuel (RU) mixed with depleted uranium (DU) to obtain a natural uranium equivalent. After the successful trials in Qinshan next year, both of these reactors will be closed AFCR fully rebuilt, after which the AFCR joint venture plans to build new AFCR units in China and beyond.

A panel of experts hosted by the China Nuclear Energy Association, which provided the framework for the latest joint venture agreement, praised the AFCR’s safety features and said it synergy with existing PWRs in China and is capable of “developing.” of promoting closed fuel cycle technologies “and industrial development” in China.

However, CNNC’s CANDU vision didn’t stop with uranium recycling. Phase one of the 2008 AECL agreement was a study to investigate the economic feasibility of using thorium in the Qinshan Phase III PHWRs. This included demonstrating the use of eight thorium oxide fuel pins in the center of a Canflex fuel bundle containing low-grade uranium. In July 2009, a second phase agreement was signed between the four R&D parties to jointly develop and demonstrate the use of thorium fuel and to study the economic and technical feasibility of its full use in CANDU units such as in Qinshan.

This was supported in December 2009 by a panel of experts appointed by CNNC. That panel also highlighted the ability of CANDU reactors to reuse uranium recycled from PWR fuel and unanimously recommended China to build two new CANDU units to capitalize on the design’s unique capabilities in using alternative fuels. Like its 2014 successor, the panel of experts consisted of representatives from leading Chinese nuclear academics, government, industrial and R&D organizations. In particular, it was confirmed that the use of thorium in the expanded CANDU 6 reactor design is “technically practical and feasible” and the “improved safety and economy” of the design cited as reasons for its short-term use in China.

No action was taken at the time to build new CANDU units, but the new joint venture contract for AFCR development is a clear step in that direction, even if thorium takes a back seat in uranium recycling.

Full development of AFCRs with one matching all four 1000 MWe class PWRs would involve putting reprocessing plants into operation early, but would reduce the need for enrichment capacity and fresh uranium from mines. The reprocessing facilities would also produce mixed oxide fuel (MOX) plutonium for the PWR fleet, which would further reduce uranium needs. Farther out are fast reactors that would also use the separated plutonium extracted for used PWR fuel.

One reason that the thorium option with AFCR was not as strongly pursued as uranium recycling could be that the Chinese Academy of Sciences (CAS) launched a research and development program for thorium-growing molten salt reactors (Th-MSR or TMSR), also known as Liquid Fluoride Thorium Reactor (LFTR). The Academy claims to be making the world’s largest national effort and hopes to gain full intellectual property rights to the technology. The unit they are building is said to be similar to the 7 MWt Oak Ridge Test MSR, which ran on U-235 and then U-233 fuels, the latter of thorium, in the US in 1965-69. The schedule for full commercialization of TMSR technology was originally 25 years, but it is said to have shortened dramatically, which may translate into increased funding.

The TMSR research center has a 5 MW solid fuel MSR prototype under construction at the Shanghai Institute of Nuclear Applied Physics (SINAP, under the academy) with a 2015 target under construction. This is also known as the fluoride salt cooled high temperature reactor (FHR) in the parlance of Generation IV or Advanced HTR (AHTR). This is all another interesting story, along with China’s development of high temperature gas cooled reactors (HTR) and, to a lesser extent, fast neutron reactors.

Ian Hore-Lacy is a Senior Research Analyst at the World Nuclear Association. Ian is one of the longest serving staff for the WNA and the author of the organization’s information library.