The Dark Side Of Solar Power

Everyone loves solar energy, right? It’s beautiful, clean, and renewable energy that’s available almost anywhere the sun shines. If only the panels weren’t so expensive. Even better, according to the International Energy Agency, solar is the cheapest form of electricity for businesses today. But solar isn’t all apples and sunshine – there is a dark side you may not know about. Making solar panels is a dirty process from start to finish. Breaking down quartz for silicon causes the silicosis of lung disease, and making solar cells uses a lot of energy, water and toxic chemicals.

The other problem is that solar cells have a guaranteed life expectancy of around 25 years with average efficiency losses of 0.5% per year. If the replacement begins after 25 years, all panels installed during the boom of the early 2000s will time out. The International Renewable Energy Agency (IREA) estimates that we will examine 78 million tons of bulky electronic waste by 2050. IREA also believes that by then we will also be generating six million tons of new solar e-waste every year. Unfortunately, at least in the USA, there are hardly any measures to recycle solar modules.

How are solar panels made in the first place? And why is it so difficult to recycle? Let’s shed some light on the subject.

Monocrystalline and polycrystalline plates. Images via AZoCleantech and HaHaSmart Solar

There are three basic types of solar collectors: monocrystalline, polycrystalline and thin-film. Each cell of a monocrystalline solar module consists of a single silicon crystal. These are the single malt scotch from solar panels and are usually black.

Polycrystalline plates look mixed up and multifaceted because they consist of several silicon crystals. These panels are usually blue and this is due to a coating that makes them more effective. Thin film solar panels are the type you see in solar calculators and clocks, and they offer the lowest level of efficiency. These are made of amorphous silicon, which is why they are so different from the other two. 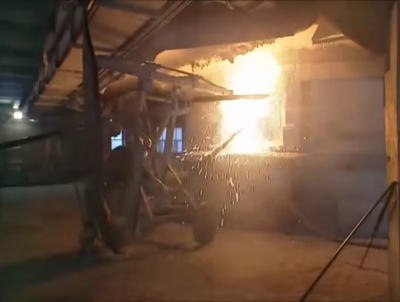 Extracting silicon from quartz requires an insanely hot furnace and a long pole. Picture about how it’s done

Regardless of the type, solar cells start with sand, usually high-purity quartz, which is sandblasted at high temperatures. The quartz is first refined into metallurgical silicon and then purified into polysilicon. This creates a highly toxic compound called silicon tetrachloride. This stuff is bad enough on its own, but when dumped and reached local waters it releases hydrochloric acid.

The resulting polysilicon is collected in rocks and melted into bars. Boron is added (known as doping) to give the silicon a positive polarity. Then the bars are cut into wafer-thin wafers coated with a substance that causes them to absorb sunlight instead of reflecting it.

The cells are treated with a phosphor coating that negatively charges the surface and completes the pn junction, which enables the solar energy to be converted into electricity. The cells are burned in an oven and then soldered together to form plates. There is a protective glass layer on the front and a durable polymer on the back that keeps dirt and debris out.

So … do they recycle?

When properly cleaned and maintained, solar panels can last for decades. But when solar panels deteriorate, they become far less efficient and eventually stop working at all. The obvious solution might be to recycle all of those solar panels, but it’s not that simple. People don’t go to big stores and buy solar panels directly, but from companies that install them. It is up to the companies to track the panels, take them back and ensure they are recycled. The problem is that not everyone knows they can be recycled at all, and that dumping in landfills in the US isn’t monitored much.

Europe is really a leader when it comes to e-waste recycling. The European Union has a law that stipulates that manufacturers of solar modules must take back and recycle their modules at the end of their service life. The UK has a refinery that uses microbes instead of cyanide to break down e-waste and extract the precious metals. Veolia, the world’s only commercial-scale photovoltaic recycling facility, is located in France. In 2017, her partner PVCycle collected 2,400 tons of old modules across France. According to Veolia, they can achieve a 95% reusability for the collected metal and glass. Check out their process in the video below.

There are no federal mandates for recycling solar panels in the US, and only Washington states and New York have any laws about this. As a result, only about 10% of American panels are recycled. The other 90% is shipped to countries with no mandates for reuse or ends up in landfills where lead and other toxic chemicals are leached into the earth.

Solar panel recycling is currently difficult in the US and recovery of silver, copper and silicon requires custom solutions. Scrapping the aluminum frames and silver from the plating paste doesn’t matter that much, costing $ 12-25 per panel plus shipping costs to recycle it. Dumping to landfill costs only about $ 1 per panel.

It’s hard to compare the damage caused by the solar panel manufacturing process to the damage caused by burning fossil fuels for energy. Neither of them is good. So are we solving one problem while creating another? If we cannot find a global system for recycling panels, we are definitely facing a crisis.