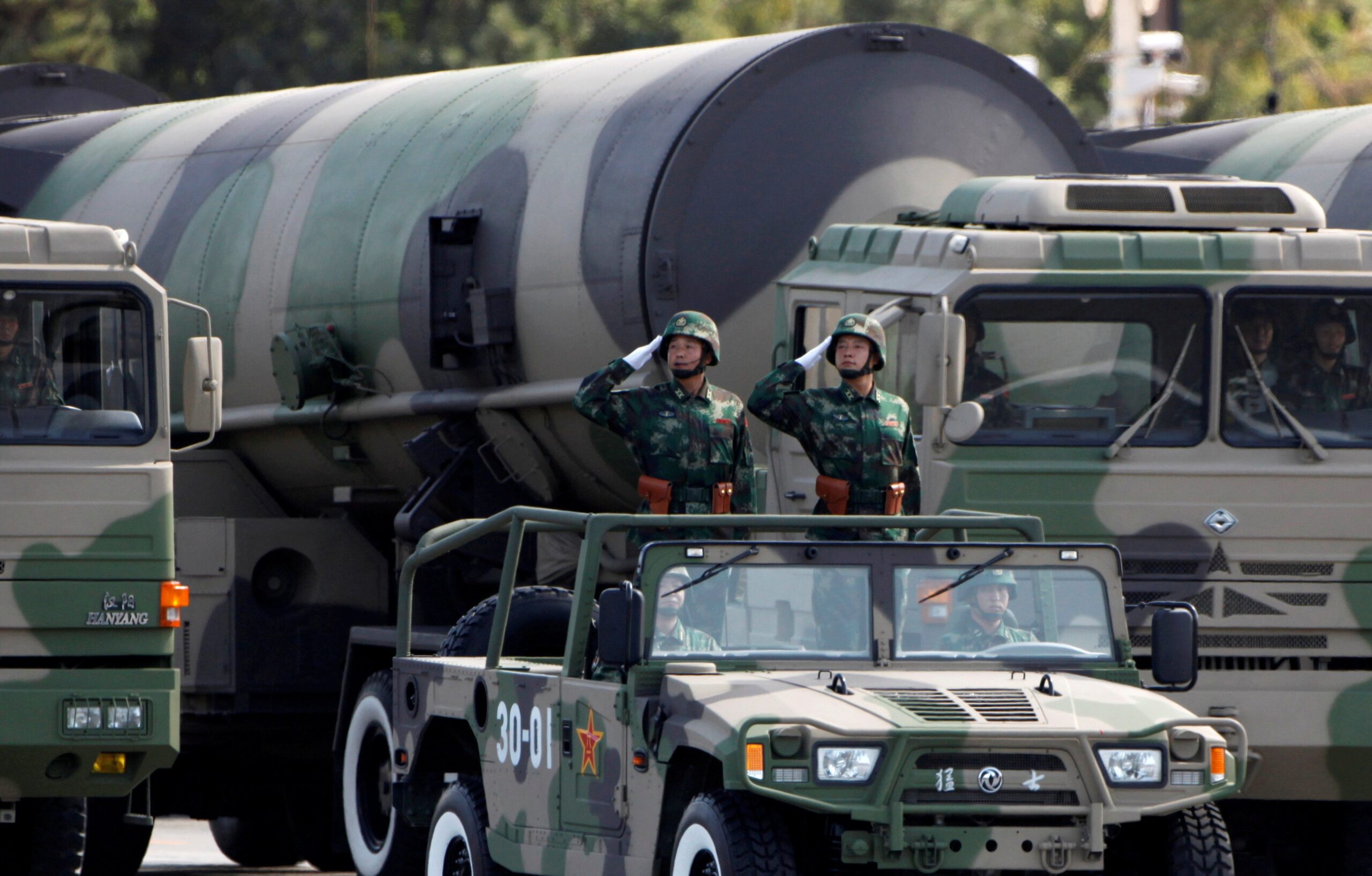 The deputy commander of US Strategic Command said at a Mitchell Institute nuclear seminar forum on Aug. 27 that China could replace Russia as the United States’s greatest nuclear-capable enemy. Lt. Gen. Thomas Bussiere said he was concerned about the recent discovery that China is building up to 400 new ICBM silos in western China. This construction could be completed within the next two to four years if it is done at a pace not dissimilar to that used by the United States in building its original Minuteman ICBMs. The missile intended for use in these silos would be the Chinese Dongfeng-41, which can carry six to ten warheads.

When is the transition point? Is it if China actually posts more nuclear weapons than Russia? “We believe in the next few years,” said Bussiere. Although the two nations have different national goals, there is evidence that these nations are “working together across spectrums and presenting a cooperative model of deterrence,” he said.

Bussiere noted that “both China and Russia have the ability to unilaterally escalate a conflict to any level of violence in any area, geographic location, anytime, and with any instrument of their national power. . . we did not face a. . . global situation like this in over 30 years, ”said John Tirpak of the Air Force Association. And although China will soon exceed Russia’s armed forces capacity, “there is no framework to negotiate arms borders with China and China has shown no interest in creating one,” Bussiere said.

Bussiere’s warning may come as a surprise to many national security experts. Depending on the source being referred to, China is now often believed to have a limited arsenal, on the order of no more than 250-350 warheads, in its deployed nuclear force, consisting of a limited number of land-based fixed and mobile ICBMs , some missiles launched from submarines and a modernizing strategic bomber force.

This current force has long been described by the Chinese government as a “small, minimal deterrent,” largely passive and similarly emulated by many Western analysts, including some US intelligence agencies, describing China as a whole as a non-threatening economic and nuclear market power is characterized by a “peaceful rise”.

Less common is the view that China may already have a deployed nuclear force approaching 1,000-3,000 warheads, as suggested by a number of U.S. experts on the subject including Rick Fisher, Brad Thayer, Peter Pry, and Mark Schneider.

Regardless of how large China’s nuclear arsenal currently is, it is growing dramatically to levels that could be equal to or greater than the entirety of the strategic nuclear forces currently deployed by the US or Russia.

The size of the Chinese build has at least three serious implications that would require solid analysis by Congress – such as within the US-China Commission – or US intelligence.

First, the Russian long-range strategic warheads (below the limits of the new START treaty) that may be available for use exceed those of the United States. Second, Russia’s short-range nuclear forces (with no arms trade restrictions) now make up at least 400 percent of the US total. These things are happening in the shadow of a new, third element: China’s deployed nuclear warheads. These warheads were neither part of an arms control framework (no arms deal restricts China’s nuclear forces) nor an explicit new threat to the size of the US strategic nuclear deterrent force.

Here the question is simple. Do numbers matter? Does the size of the US nuclear arsenal, which is 90 percent limited by the New START treaty of 2010 with Russia, now need to be reviewed in view of the great Chinese armament? Does the future provide an environment in which the United States could face up to five thousand combined strategic warheads from Russia and China during a crisis?

Some background information is important here.

Many in the disarmament community do not believe that numbers are important in deterrence as long as the United States can inflict serious damage on an adversary, often referred to as the number of cities it could attack. Global Zero founder Bruce Blair testified before Congress in 2019 that 300-600 US warheads deployed would be sufficient.

Others believe that deterrence can only be credibly maintained if one can destroy an opponent’s key nuclear and military capabilities, as well as its leadership, without which a hostile country cannot wage war or maintain its hegemony.

Totalitarian states are ready to accept the deaths of millions of their own people and the destruction of many of their cities and still consider it a “victory” if they were to win a nuclear conflict. And enforcement may have a lot to do with the assumption that enemies of the United States make about the prospect of taking down US nuclear forces.

In 1972, when the first arms deal, Strategic Armed Limitation Talks (SALT I), was signed, the United States had more than 27 at sea and hundreds of strategic bombers, many of which were in the air. That force would eventually grow to around twelve thousand deployed strategic warheads, as would the USSR’s armed forces.

America’s SNDV levels had dropped to eleven hundred prior to the New START agreement in 2010, and Russia was around five hundred. But in the New START negotiations to get Russian approval, the United States, as General James Cartwright once said, more than shared the difference with Moscow and reduced its SNDV platforms from eleven hundred to seven hundred.

But that number of seven hundred is not as robust as it might seem. Russia or China will have to destroy around five hundred targets – four hundred ICBM silos, forty launch control systems, three bomber bases, two SSBN submarine ports, and a few C3I nodes. The fully viable armed forces are currently the submarines that we turn at sea or are in transit, around four to eight submarines. According to nuclear experts, this is currently a viable force.

Proponents of deeper warheads beyond New START, however, want to unilaterally eliminate US land-based ICBMs, which would reduce the number of US warheads to a thousand. They want to reduce the US target list that Russia and China have to worry about to around twelve to sixteen assets.

Assuming that the ICBMs and bombers on the ground will be destroyed along with the submarines in the port, the retaliatory capacity of the United States from an ungenerated daily mission is probably six SSBN submarines on patrol, each with twenty missiles and an assumed 480 warheads.

However, will that be enough when the United States faces both fully nuclear-armed China and Russia? Finally, Mark Schneider believes that China and Russia together could have over seven hundred ICBM silos that would require around fourteen hundred warheads – assuming two warheads per silo are needed to ensure a high probability of destruction.

If the United States turned its retaliatory capabilities on enemy cities, would totalitarian personalities accept the destruction of more than 25 percent of their population in exchange for the annihilation of their enemy and world domination? The answer to this question could be “yes”, but a person cannot answer it intelligently unless they analyze the new nuclear equilibrium that is changing in today’s world.

While arms deals actually drastically reduced the number of stationed nuclear forces starting with the treaty on medium-range nuclear missiles of 1987 and the subsequent reduction agreements starting with START I in 1991, the USA’s nuclear deterrent cannot be achieved through arms control. The forty-year “nuclear modernization vacation” in the US is in large part due to the fact that “global zero” is viewed as a serious idea rather than a fantasy.

So what is to be done?

Does deterrence require the enduring US doctrine of countervailing power – having enough viable nuclear capabilities to inflict at least equivalent counterforce / countervalue damage to the enemy, especially enough to ensure that opposing politico-military leaders do not survive a nuclear exchange? Or will the United States take over the disarmament group’s opposition to the counterforce doctrine and arms control in order to reduce nuclear weapons to such a low level that in the intermediate phase of “global zero” only “city busting” is a deterrent option?

Also, what role does space-based missile defense play, especially when it is designed to make disarming nuclear missile attacks obsolete where “the one who strikes first doesn’t win”.

Part of the emerging stance the United States might seek is a greater number of platforms or assets, regardless of the extent to which warhead heights are limited. Years ago I asked Cartwright if it wouldn’t make more sense to expand our platforms and SNDVs even though the United States was reducing warheads to improve the deterrent. He said the Russians would not agree.