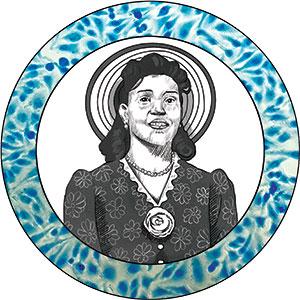 Ethical concerns about her cells, the most widely used in research, are in the spotlight as family seeks reparation

In the opaque world of scientific research, HeLa cells are legendary. These cells mark one of the most significant milestones in the history of modern medical research, because it was the first time in decades that scientists were able to keep human cells alive in culture.

While other cells died eventually, HeLa cells were amazing: they reproduced every 24 hours and never stopped doing so, thus becoming the first immortal cells grown in a laboratory.

They have been used in research over a wide spectrum and were instrumental in developing drugs for an astonishing range of diseases, from influenza and herpes to leukemia and Parkinson’s.

Jonas Salk’s life-saving polio vaccine would not have been possible without HeLa cells. And they also became a multimillion-dollar industry for some companies.

Yet, for decades, the racial origin of the most famous human cell was kept hidden from the world—and from her family.

The remarkably prolific and resilient cells were taken from the cervical tumor of a young Black woman, Henrietta Lacks—hence the name HeLa—who was being treated at Johns Hopkins Hospital in Baltimore, US, for a virulent form of cervical cancer.

Lacks was a young mother of five when she died in 1951 at the age of 31. Her cells were collected by George Gey, a prominent cancer and virus researcher, who ran a nearby tissue laboratory.

Lacks did not know that her cells were being taken for culture, nor was her’s or her family’s permission sought before or after her death.

It was not until 1981 that the origin of HeLa was credited to her, and her family learned of this by accident. This and the subsequent story of how her family was used for further research, again without their knowledge or consent, has sparked a debate on an individual’s right over their genetic material and also the ethics over its use by researchers and commercial organizations.

There is also a lawsuit by Lacks’ heirs, who are seeking compensation from laboratories that made millions from the sale of HeLa cells. For a start, they have filed a case against Thermo Fisher Scientific, accusing it of selling Lacks’ cellular material, developing and manufacturing cellular products incorporating HeLa cells, and seeking intellectual property (IP) rights on them.

This implies they are staking IP rights on their genetic material. The nub of the case is that the company appropriated Lacks’ genetic material for its own gain without payment, permission or approval from the Lacks Estate or family.

The family had previously sought payment from Johns Hopkins and the suit against Thermo Fisher mentions “the unlawful conduct” of its doctors. Johns Hopkins is categorical that it has “never sold or profited from the discovery or distribution of HeLa cells” and does not own the rights to the cell line.

“Rather, Johns Hopkins offered HeLa cells freely and widely for scientific research.” The controversial point here is whether the hospital and Gey acted unethically or illegally in taking tissue from Lacks’ cervical tumor.

The hospital says that at the time, tissue samples were drawn from all patients regardless of race and socio-economic status, and no formal consent was required. The institution points out that it was one of only a handful to have treated poor African-Americans in the early decades of the last century.

Johns Hopkins has made some amendments by naming a building on its campus after Lacks, because it acknowledges “the HeLa cell line has been critical to numerous advances in medicine.”

Other institutions have made monetary reparations. A high-profile six-figure donation (exact amount was not disclosed) was made by Howard Hughes Medical Institute to the Henrietta Lacks Foundation in 2020.

The institution said it was done to “acknowledge Henrietta for the use of HeLa cells and to acknowledge that the cells were gained inappropriately”. Observers are hoping the gesture by the institution, which is a major funder of basic biomedical research, will set an example for other research outfits.

The HeLa case came into public focus only after Rebecca Skloot published The Immortal Life of Henrietta Lacks, a personalized memoir and scientific account of the life and afterlife of the Black woman who made the most significant contribution to the fight against a host of diseases.

The book, which highlighted racial discrimination and exploitation of African-Americans, was made into a film starring Oprah Winfrey. Skloot also set up the foundation, which gives grants to people who have unknowingly been part of historic medical research studies and to their families who did not benefit from the work.

It supports families of Black men who, from 1932 to 1972, were part of a callous US government experiment to observe the effects of untreated syphilis. The men were given placebos and sham treatment but were told they were receiving free healthcare.

World Health Organization (WHO) chief Tedros Adhanom Ghebreyesus has done much to make reparation and to highlight the inherent racial and other inequalities in medical care.

Over the past year, he has bestowed the WHO Director-General’s Award on Lacks in recognition of the “world-changing legacy of this Black American woman” and more recently on October 16, he appointed the Lacks family as WHO Goodwill Ambassadors for Cervical Cancer Elimination. The appointment is a recognition of their efforts to champion cervical cancer prevention and to preserve the memory of their ancestor.

In a strong reminder of persistent inequities, Ghebreyesus noted that Lacks’ cells were foundational in the development of human papillomavirus (HPV) vaccines that can eliminate the same cancer that took her life, and yet in countries with the highest burden of cervical cancer, these vaccines were not adequately available.

So, too, with COVID-19 therapies and many other life-saving innovations developed with the miraculous HeLa cells. Although the cells were used in COVID-19 research, tools to stop the disease are not being shared with low- and middle-income countries.

He would, or should, have made scientists and research organizations uncomfortable when he pointed out how much some people benefited from the cells.

“Fortunes have been made, science has advanced, Nobel Prizes have been won and most importantly, many lives have been saved. No doubt, Henrietta would have been pleased that her suffering has saved others.”

Tedros said by honoring Lacks, WHO acknowledges the importance of reckoning with past injustices and advancing racial equity in health and science. In this, he was endorsing the call of many that science must right historical wrongs of the past. Nothing must be taken from a person without consent.

This was first published in the November 16-30, 2022 edition of Down To Earth

We are a voice to you; you have been a support to us. Together we build journalism that is independent, credible and fearless. You can further help us by making a donation. This will mean a lot for our ability to bring you news, perspectives and analysis from the ground so that we can make change together.