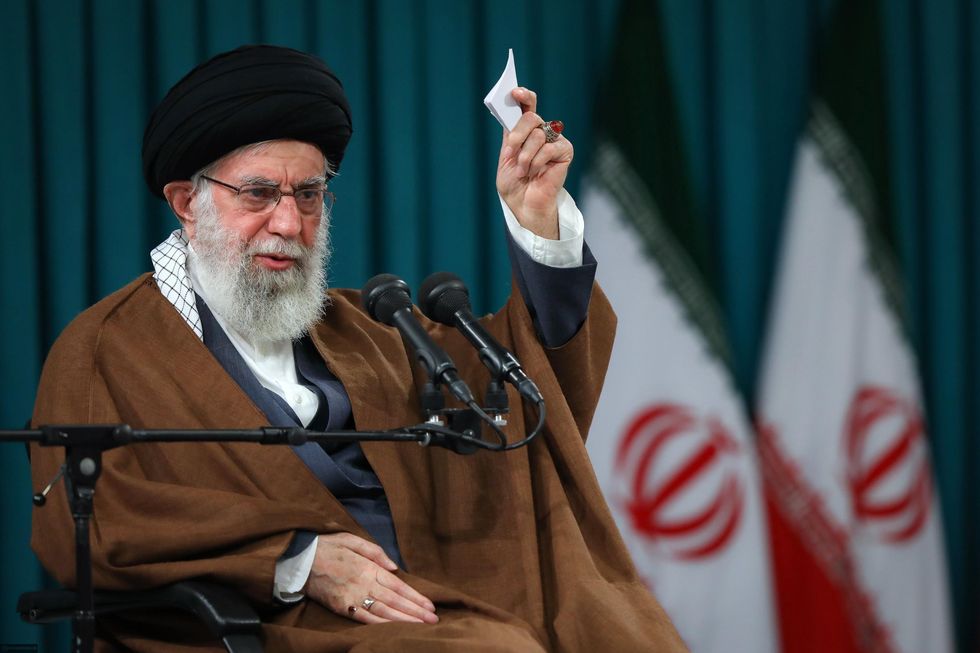 Rafael Grossi, the head of the International Atomic Energy Agency (IAEA), the UN’s nuclear inspectorate, declared on Sept. 7 that Iran already had more than enough uranium for an atomic bomb. He said the IAEA could no longer confirm that the Islamic Republic has a strictly peaceful nuclear program as it has always claimed because the agency could not properly inspect sites inside Iran.

The Islamic Republic may have shown flexibility in some of its demands in the talks to renew the 2015 nuclear pact with world powers, a preliminary framework reached between Iran and the P5+1 (the US, the UK, China, Russia, France and Germany ). For example, it no longer insists that the West delist its Revolutionary Guards as a terrorist organization. But it has kept its crucial promise that unless Western powers lift all economic sanctions, the regime will boost its uranium reserves and their level of enrichment, as well as restrict the IAEA’s access to installations.

Talks to renew the 2015 pact have been going on for 16 months. European diplomacy has resolved most differences between the sides, but some crucial sticking points remain.

For 20 years now, the Islamic Republic’s dogged pursuit of nuclear power and its showdown with the West over this and other issues have been so costly and harmful to Iranian national interests as to even prompt regime sympathizers to speak up. Some are asking, perhaps perhaps , why the country even needs a peaceful nuclear program when it is bathed in sunshine 300 days a year. Why has the state spent billions of dollars to generate power in the Bushehr atomic plant (on the Persian Gulf), when it generates less than 2% of all electricity made in Iran.

The power plant has had a drop in production for the fourth year running and is generating debt instead. Yet Iranian officials say they want to build more nuclear power plants. The head of Iran’s Atomic Energy Organization, Muhammad Islami, has claimed the country had no “funding problems” in their construction, when the state can barely pay the Russians (for their fuel) in Bushehr and has had to pay through oil and gas swaps.

Iranian officials insist this nuclear program will bring advances in the fields of medicine, pharmaceuticals and agriculture. It is difficult to believe the claims when the regime’s overall conduct barely indicates concern for healthcare or a flourishing farming sector. Besides, none of these require uranium enrichment to be hiked to 60% and 90% levels. The country’s supreme leader, Ali Khamenei, once issued a religious edict for bidding nuclear weapons, which Iranian officials keep citing as proof that Iran is not after the bomb.

Yet the West remains skeptical.

Others among the Iranian elite take more ambivalent positions, or even cite justifications for nuclear armaments. Some have said nuclear weapons should not be “demonized” if they can enhance the Islamic Republic’s strategic defense and survival. One prominent former MP, Ali Mottahari, ventured to say that from the very start of this program, “our intention was to build a bomb.”

Those who defend the bomb are precisely the regime’s most repressive elements. One of them is the Guards veteran and current parliamentarian Ismail Kowsari, who has been active in the past in suppressing street protests. He recently said “we can turn the 60% enrichment into 93% enrichment, which means a nuclear bomb.” Another one is Amir’ali Hajizadeh, head of the Revolutionary Guards aerospace division and suspected to have ordered a passenger plane shot down in Tehran in 2020. His unit is developing long-range missiles able to deliver nuclear warheads.

Ali Khamenei, once issued a religious edict for bidding nuclear weapons, which Iranian officials keep citing as proof that Iran is not after the bomb.

No smokes about sending Iranians to die

Some observers say there is no real cause for alarm, as the regime would or could not ultimately use a nuclear weapon. They seem to forget that those pushing for a bomb in Iran are the same ones who crush protests and have brought regional countries to a state of ruin.

The Islamic Republic may be close to a conflict.

In his testament, the late Revolutionary Guards general Qasem Suleimani described Iran as “Hussein’s bastion,” in a reference to the grandson of the Prophet Muhammad, a figure revered by the Shias. Its fall, the text suggests, would threaten the Islamic religion itself.

The people running the nuclear program have no qualms about sending Iranians to their deaths. In fact, they call it martyrdom.

The only solution is regime change

Western leaders know that another pact with this regime can only slow down its nuclear progression. With their unyielding devotion to diplomatic talks and economic sanctions, they are merely pushing the showdown with the Islamic Republic down the road. Perhaps some Western politicians believe or hope Iranians will have topped the regime in the meantime.

Iran may be close to a conflict, though its scope is uncertain.

Israel’s former prime minister, Ehud Barak, has written in Time magazine that it is too late to stop the Iranian regime’s nuclear program. The only solution now, he says, is regime change. That is precisely what Iran’s heir presumptive, Reza Pahlavi, has been telling Western powers for years, to little avail. The only “third option” to a destructive war or appeasing a deceitful regime, he has said, is to back the opposition of millions of Iranians to a corrupt elite.

From Your Site Articles

Related Articles Around the Web