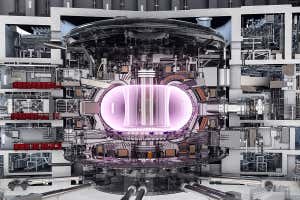 The ITER fusion reactor will contain the largest magnet in the world, vertically in the center of this figure

The world’s strongest magnet is being shipped to France to be installed in the core of ITER, the experimental fusion reactor. It is hoped that ITER will prove the feasibility of producing fusion energy on an industrial scale by recreating the process at the center of our sun.

The magnet, the so-called central magnet, is delivered in parts and will be 18 meters high, 4.2 meters wide and weigh around 1000 tons after completion. With a magnetic field strength of 13 Tesla, it will be around 280,000 times stronger than the Earth’s magnetic field. Because of this, the structure in which the central solenoid sits must withstand forces equivalent to twice the thrust of a space shuttle take-off.

The magnet will consist of six modules, each containing 43 kilometers of wound niobium-tin superconductors. Once in place, these coils are sealed with 3800 liters of epoxy and shipped from the General Atomics factory in California to the ITER construction site in France. The first module goes this month and the next one follows in August.

When completed, ITER will be the largest fusion reactor to date, with 2025 being the current ultimate goal. The engineers of the project want to make it the first reactor that delivers more energy from fuel than is necessary to maintain the fusion reaction – 500 megawatts of usable energy from an output of 50 megawatts are planned.

Unfortunately, the necessary temperatures of over 150 million ° C would melt all known materials on earth, so ITER will use strong magnets to contain the reaction in a ring away from metal surfaces. Water pumped through the walls of the reactor turns into steam and drives turbines to generate electricity. The central solenoid creates a flow of reactive plasma around the ring, while other magnets contain the plasma in the ring and adjust its shape.

Unlike existing nuclear power plants that use fission, fusion reactors do not produce radioactive wastes with a long half-life, and their deuterium fuel is abundant. You are also safer because any disruption of the reaction causes it to stop rather than run away uncontrollably. However, it has proven to be far more difficult to use fusion as an effective source of energy.

An earlier international effort resulted in the construction of the JET fusion reactor in the UK in the 1980s, which also aimed to break even at the point where more energy was produced than was used. Although at some point it was closer than any other device to this goal, it has not yet achieved it.

The UK is also developing plans for a spherical energy production tokamak (STEP), a nuclear fusion power plant that could begin construction in 2030 if it finances costs of around £ 2 billion.

More on these topics: