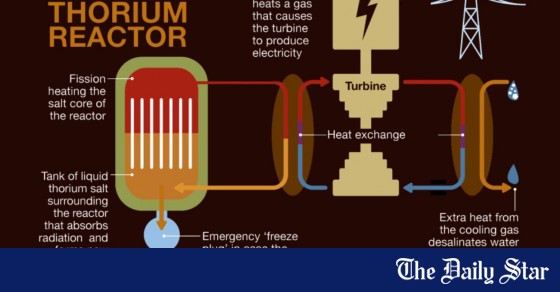 A flying neutron charges itself on an atom. It briefly transforms into an unstable atom before breaking up into a few other atoms and more neutrons. In short, this is nuclear fission – a process that feeds “clean” electricity into our lives. These fellow neutrons head out to hit more atoms and start a chain reaction. More heat, more energy. However, when it loses control, that reaction turns into a terrible explosion, an uncontrolled chain reaction – the underlying principle of an atomic bomb.

However, the atoms cannot be any element from the periodic table. Uranium-235 and plutonium-239 are the most commonly used. But what about thorium, which lives in the same row as uranium?

Thorium-232 has been in the spotlight lately as a likely successor to uranium. It is possible that thorium, named after the Norse god Thor, will by all means propel our future. But would we let that thought create reality? The answer is not easy.

Reactors like the light water reactor (LWR) used today run on U-235. A typical reactor has a core containing fuel rods, a moderator (made of water or graphite) to slow down electrons, control rods made of boron to absorb neutrons and stop the reaction. This reactor is flooded with a coolant such as heavy / light water and molten sodium, which removes the heat (preventing it from melting down) and is sent to a heat exchanger. Here, water is converted into steam and passed on to rotating turbines to generate electricity.

A liquid fluoride thorium reactor (LFTR), pronounced a “lifter”, is a type of molten salt reactor, a completely new type compared to conventional ones. It burns Th-232 to form U-233, a fissile isotope. The takeover can be justified under three aspects: safety, fuel efficiency and nuclear waste.

The LFTR comes standard with a number of notable safety features. For example, due to their nature, they are rated for atmospheric pressure, unlike LWR, which uses high pressure water and has the risk of explosion. Hence, LWRs require precautionary containment infrastructure. Another security feature concerns the “negative reactivity coefficient of temperature”. For laypersons this means that the reactivity decreases with increasing reactor temperature. This means that the reactor is melt-proof and the consequences of overheating are not a problem. To increase overall security, frozen safety plugs work interestingly. If the temperature of the reactor core exceeds a critical point, this plug melts and drives the liquid fuel into a passively cooled tilt tank, effectively cutting off the fuel supply.

Fuel efficiency is key to building nuclear reactors. In the LWR, tons of uranium are fed to the reactor. 250 tons of uranium contain 1.75 tons of U-235. This will undergo an enrichment process and eventually only 35 tons will be left, of which 1.15 tons is U-235.

Not much changes when burned. The same 35 tons, with the exception of 33.4 tons, are U-238, 0.3 tons of U-235, 1 ton of fission by-products and finally 0.3 tons of “useful” plutonium. This plutonium was precisely why research on thorium was abandoned because uranium leads to what can be used to make nuclear weapons. Given the turmoil of the Cold War era, this proved to be a “safer” option for a number of nations.

But bring thorium and the calculation will change completely. A ton of thorium burns completely to get the same amount of fission by-products. In addition, 83 percent of these will be stable within 10 years. The remaining 17 percent must be stored for about 300 years. This is due to the different spectrum of by-products formed. A very small amount of plutonium also forms, which was initially frowned upon. The heat and radiation damage a significant part of the uranium fuel rods and must be removed before they can be completely burned. For example, one ton of natural thorium produces on average as much energy as 35 tons of enriched uranium. To top it off, thorium is three times more abundant than uranium in the earth’s crust.

But if thorium is really that great, why not pursue it further?

Because the nuclear industry currently lacks operational experience with the system. The only time thorium was used in the reactors was at Oak Ridge National Laboratory in the 1960s after World War II.

There are concerns about economic viability as it has not been proven on a commercial scale. Thorium is not ideal for current reactors and therefore new designs have to be adapted. All of this raises the question of adequate funding. Some experts even claim that thorium force is nothing more than a distraction.

The hype is less radioactive waste, virtually no weapons-grade by-products, and cheaper fuel. Despite all adversities, climate change is ruthlessly conquering the world. To fight carbon emissions and repair any damage already done, nuclear power is considered to be one of the fastest ways to do it. It is high time to prioritize where to pump our money.

Hiya loves food that you hate on regular broccoli, pineapple pizza, and bounty bars. Find her at [email protected]