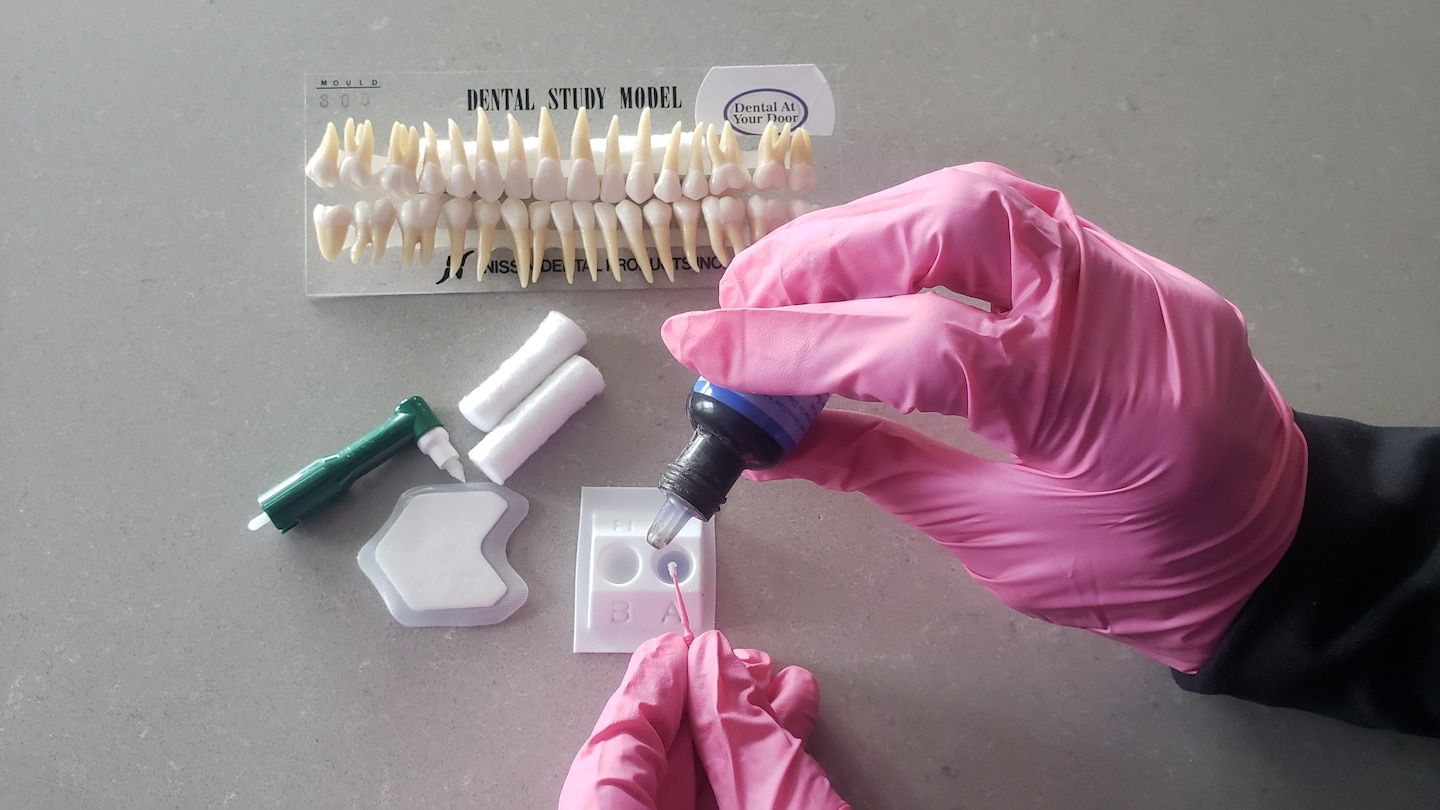 Tooth decay treatment can be brushed on without drilling

DENVER — Dental hygienist Jennifer Geiselhofer often cleans the teeth of senior patients who can’t easily get to a dentist’s office. But until recently, if she found a cavity, there was little she could do.

“I can’t drill. I can’t pull teeth,” said Geiselhofer, whose mobile clinic is called Dental at Your Door. “I’d recommend they see a dentist, but that was often out of the question because of mobility challenges. So visit after visit, I would come back and there would be more decay.”

But now Geiselhofer has a weapon to obliterate a cavity with a few brushstrokes.

Silver diamine fluoride is a liquid that can be painted on teeth to stop decay. Fast, low-cost and pain-free, the treatment is rapidly gaining momentum nationwide as the cavity treatment of choice for patients who cannot easily get a filling, such as the very young or the very old.

“It has been life-changing for my patients,” said Geiselhofer, who has been using the treatment for about 18 months.

Geiselhofer has not been able to go into nursing homes during the pandemic, but she uses the liquid on the older adults she visits in private homes. She also uses it to treat the cavities of patients in homeless shelters, jails and Head Start programs ― now wearing greater protective gear, including gloves, a surgical mask, an N95 mask and a face shield.

The topical medication is an especially good option for the elderly, dental industry experts say, because dental care has remained a major gap in health insurance coverage despite poor dental hygiene being linked to heart disease and other health problems such as diabetes and pneumonia. Medicare doesn’t cover most dental care, and patients on a fixed income often cannot afford treatment. But because of the effectiveness and low cost of silver diamine fluoride, more state Medicaid programs now cover it — and older adults who pay out-of-pocket can afford it outright.

Silver diamine fluoride has been used in other countries for decades, and studies have proved it safe. Its biggest downside is that it permanently turns the decayed area black — a turnoff, in particular, for people with decay on a front tooth. Dental providers say the black spots can be covered by tooth-colored material for an extra cost. For older adults, Geiselhofer said, a dark spot is a small price to pay for a treatment that stops cavities quickly, with no drilling, needle prick or trip to the dentist required.

Silver diamine fluoride was approved by the Food and Drug Administration in 2014 for reducing tooth sensitivity. But its off-label use to treat cavities was quickly adopted. It made headlines as a trauma-free treatment for tooth decay in children 5 and under.

Pediatric dentists have embraced it as a solution for children who cannot sit still for treatment and whose parents want to avoid general anesthesia. In 2018, James Nickman, then-president of the American Academy of Pediatric Dentistry, said that, aside from fluoridated water, the topical cavity fighter “may be the single greatest innovation in pediatric dental health in the last century.”

But today, with more older Americans keeping their natural teeth than in decades past, the treatment is also serving as a boon for a different generation. Because of insurance gaps and the prohibitive cost of most dental treatments, many seniors miss out on preventive care to stave off dental decay, putting them at risk for dental disease that can trigger serious health problems. About 27 percent of Americans 65 and older have untreated cavities, according to the Centers for Disease Control and Prevention.

Residents in long-term care facilities are at especially high risk, studies show. Medications cause their mouths to dry, promoting decay. They also may have cognitive issues that make it difficult to practice good oral care. And many are either too frail for traditional dental treatment or too weak to be transported.

Take 87-year-old Ron Hanscom, for example. A patient of Geiselhofer’s, he has been in a Denver nursing home since he had a stroke six years ago, and needs a mechanical lift to get into and out of his wheelchair.

On a visit to Hanscom’s nursing home this year before the pandemic, Geiselhofer spotted a cavity under one of his crowns. After checking in with his dentist, she used a small brush to paint on the silver treatment. “It’s a good thing she had the silver, because I couldn’t get to a dentist’s office — no way,” Hanscom said. “She did it right in my room.”

Across the country, dental hygienists provide much of the care to patients like Hanscom who otherwise might never see a dentist. They also see patients in homeless shelters, schools, jails and low-cost medical clinics. Since the pandemic hit, Geiselhofer said she has received a flood of requests for in-home care from seniors who are too nervous to go into a dentist’s office, but she has turned them down because she is too busy caring for the underserved.

Many states allow hygienists to work directly with patients in public health settings without a dentist’s supervision, and Colorado is one of a few that allows them to set up an independent practice.

Because the silver treatment is relatively new in this country and can leave a stain, the Colorado state legislature passed a law in 2018 that says hygienists must have an agreement with a supervising dentist to apply it. The law also requires them to get special training on how to use the liquid, which at least 700 hygienists from across the state have completed.

Other states, including Maryland and Virginia, have no special requirements for applying the cavity treatment but require some supervision by a dentist, said Matt Crespin, president of the American Dental Hygienists’ Association. In those places, hygienists apply it under the same rules that govern the application of other fluoride products.

Studies show silver diamine fluoride stops decay in 60 to 70 percent of cases with one application. A second application six months later boosts the treatment’s long-term effectiveness to more than 90 percent.

In addition to killing cavity-causing bacteria, the treatment hardens tooth structure, desensitizes the tooth and even stops new cavities from forming. Applying the liquid on the exposed root surfaces of older adults once a year is “a simple, inexpensive, and effective way” to prevent cavities, a 2018 study concluded.

One of the most important benefits of the application on older patients is that the liquid can reach decay that forms under existing dental work such as crowns and bridges, said dental hygienist Michelle Vacha, founder of Community Dental Health, which runs clinics in Colorado Springs and Pueblo, Colo.

Previously, a dentist would have had to remove the crown, drill out the cavity and make a new crown — a traumatic, time-consuming procedure with a typical cost of $1,000 or more, Vacha said. Unable to afford the cost, many patients would instead have the tooth pulled.

The paint-on liquid is significantly cheaper than traditional treatment. Estimates vary, but a private dentist may charge $10 to $75 for one application, compared with $150 to $200 for a filling. Hygienists often have lower fees. At Vacha’s community clinics, the cost is $10 a tooth.

About half of state Medicaid programs reimbursement for the treatment, said Steve Pardue, scientific officer of Elevate Oral Care that distributes Advantage Arrest, the main brand of the topical medication used nationally. Reimbursement rates range from $5 to $75 per application.

More private insurers — about 20 percent to 30 percent of them — have also started covering it, Pardue said.

A small but growing number of mainstream dentists have begun to offer the treatment to all patients.

It’s a good option for those who have anxiety about dental work or concerns about cost, said Janet Yellowitz, director of geriatric and special care dentistry at the University of Maryland School of Dentistry.

A 2017 survey by the American Dental Association found that almost 8 in 10 dentists had never used the treatment. The ADA doesn’t have more recent statistics, but ADA spokesman Matthew Messina said anecdotal reports indicate usage is increasing.

Yellowitz said dentists still have a financial incentive to drill and fill. She has made presentations highlighting the benefits of the silver solution at national conferences.

“We’re trying to get everyone to use it,” she said. “It’s a slow process because we’re asking dentists who have been trained for their whole careers to do things one way to completely change their mentality. It’s like asking them to go to another country and drive on the other side of the road.”

Kaiser Health News is a nonprofit news service covering health issues. It is an editorially independent program of the Kaiser Family Foundation that is not affiliated with Kaiser Permanente.

You should still go to the dentist during the pandemic, but be careful

A dental visit can cost you, but a delay can hurt your teeth and budget even more

Ways to help older neighbors and relatives in isolation

Phosphorylation of RXRα mediates the effect of JNK to suppress hepatic FGF21 expression and promote metabolic syndrome | Proceedings of the National Academy of Sciences – pnas.org