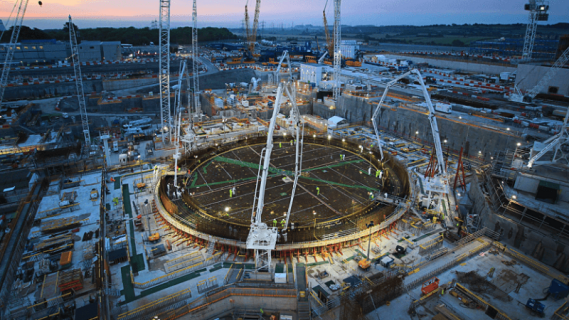 A total of six tunnel heads that are needed for the Hinkley Point C nuclear power station’s cooling water system will soon be lifted into place on Bristol Channel’s seabed. The intake and outfall heads will cap the 8km of tunnels that will supply Hinkley Point C’s two nuclear reactors with cooling water.

The tunnel heads have reportedly been loaded onto barges at Bristol Port’s Avonmouth docks. The barges will be towed to meet the Guilliver and Rambiz floating heavy lift cranes. Because of the weight of the heads, the cranes will work in tandem to lower the structures into place on the seabed. Lifting specialist Mammoet will carry out the loading operation. During the process, the water levels will be adjusted at the dock to ensure that the barge can receive the load safely.

Proposed change to how the facility stores radioactive waste

Noteworthy, pressurized water reactors at Hinkley Point C will use uranium fuel to create heat and generate electricity when operational. After use within the reactor, nuclear fuel will be stored on-site before being sent off-site to a Geological Disposal Facility (GDF).

NNB Generation Company (HPC) Limited was initially issued a radioactive substance environmental permit back in 2013. In the original design, radioactive waste was to be stored on-site in ‘wet storage’. This is a method of submerging and storing in water. However, the operator has decided to change the technology from ‘wet storage’ to ‘dry storage’. In the latter the used fuel will be sealed in containers within the facility before it is sent to the GDF.

As a result, the operator now seeks to change its radioactive substances environmental permit. This will enable it to remove or amend specific conditions related to the previous wet storage technology that are no longer relevant. The operator has said that altering the storage method will not change the expected radiation dose to the general public from discharges or the wider environment, which remains incredibly small.

Separately, HPC is seeking the necessary changes to its Development Consent Order for Hinkley Point C in the autumn.

Hinkley Point C is a 3,260MW nuclear power plant under construction in Somerset, South West England, UK. It is the first new nuclear power facility to be built in the UK since 1995 or rather in more than 20 years.

The project is expected to power over 6 million homes. It will also create 25,000 employment opportunities and more than 1,000 apprenticeships. Hinkley Point C is projected to have lasting benefits for the UK economy.

The Hinkley Point C will be equipped with two reactors and is estimated to cost $28 billion. The construction of the project was launched in 2017 after being approved by the UK government in September 2016.

The UK government is making a lot of investments as it seeks to revitalize its nuclear power industry. The Hinkley Point C is expected to make significant moves toward the reduction of carbon emissions. The power from the nuclear plant is expected to offset 9 million tonnes of carbon dioxide emissions a year. This will be equal to 600 million tonnes over its 60-year lifespan.

EDF and CGNP will fully finance the Hinkley Point C nuclear power project. The total cost of the project as of 2016 was expected to amount to $59.8 billion. This cost was inclusive of construction, nuclear waste management, operation, and decommissioning costs.

In September 2015, the UK government promised a $2.6 billion in debt guarantee for the project. In October 2015, China General Nuclear Power (CGNP) agreed to invest $7.89 billion in the project.

The Hinkley Point C nuclear power project is also guaranteed with a strike price of around $156 for every megawatt-hour (MWh) according to 2012 prices. This pricing will apply to power produced for a period of 35 years and is part of the deal finalized by the UK government in September 2016.

The Big Carl (SGC-250) has been installed on-site for the construction of the Hinkley Point C nuclear power project. Big Carl is a 250m-tall and 5,000t capacity super heavy lift ring crane that has 96 individual wheels on 6km of rails. The crane was installed on the site in September 2016. The crane was designed and operated by Sarens, a Belgian crane rental company.

EDF and Areva (now Framatome) submitted the EPR design to the UK’s Office for Nuclear Regulation (ONR) for safety checks.

EDF acquired British Energy, the owner, and operator of eight power stations in the UK including the Hinkley Point.

An application for Hinkley Point C (HPC) was submitted by EDF to the UK’s Infrastructure Planning Commission.

The site license for HPC was approved by UK’s nuclear regulator. The project’s EPR design was also approved for use in the UK.

The UK government gave the Development Consent Order for the project paving the way for the start of construction.

The final investment decision on the Hinkley Point C project was made.

The UK Government approved the HPC deal and permitted construction

Construction of the 49,000-ton concrete base for the second reactor at Hinkley Point C is now completed. The base was made from 20,000 m3 of nuclear grade concrete which was poured in using boom cranes. Work at the Somerset site has been continuing during the coronavirus lockdown with social distancing measures in place to protect workers.

Bilfinger has been awarded two additional contracts worth US $450.5m to provide execution design, supplier management, procurement, pipework fabrication and construction works for Nuclear Steam Supply System (NSSS) and Balance of Nuclear Island (BNI). The system transports the steam needed to drive the turbine generator unit and ultimately produce low-carbon electricity. The Nuclear Island is at the heart of the nuclear power plant, including the reactor, the steam generators and primary safety and piping systems.

The contracts will be booked in tranches under Bilfinger’s Technologies and Engineering & Maintenance Europe segments. The work on the two contracts will begin immediately and continue until 2025. Most recently, Bilfinger had booked contracts for the Balance of Plant (BoP) package as well as design preparation and planning work for the solid waste treatment systems.

Hinkley Point C is the first new nuclear power station to be built in the UK in over 25 years. It is expected to provide low-carbon electricity for around 6 million homes, create thousands of jobs and bring lasting benefits to the UK economy.

Bitcoin Is A Net Benefit To The Environment – Bitcoin Magazine