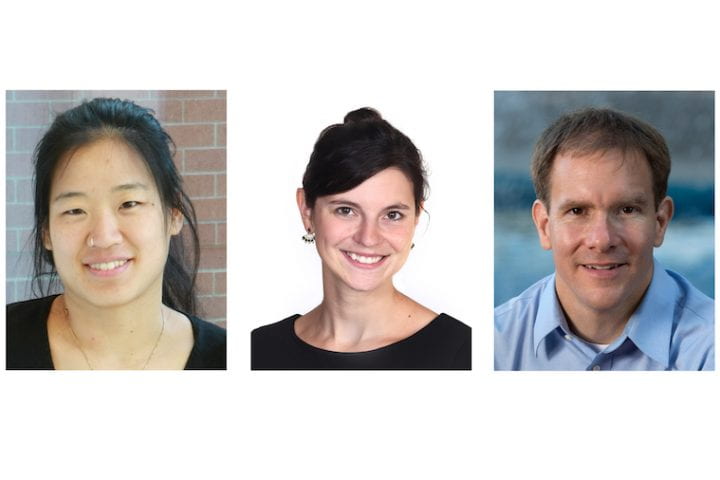 Irvine, Calif., Sept. 7, 2022 – Teams led by University of California, Irvine chemists Shane Ardo, Sarah Finkeldei and Jenny Yang have received a combined $25 million from the US Department of Energy under its Energy Frontier Research Centers program and Clean Energy Manufacturing initiative. The funding is part of $540 million in awards for sustainable energy technology and low-carbon manufacturing research at 54 universities and 11 national laboratories around the United States.

Meeting the nation’s ambitious climate and clean energy goals “will require a game-changing commitment to clean energy — and that begins with researchers across the country,” said US Secretary of Energy Jennifer Granholm. She added that the research projects will “strengthen the scientific foundations needed for the United States to maintain world leadership in clean energy innovation, from renewable power to carbon management.”

Ardo, a UCI professor of chemistry, directs the Ensembles of Photosynthetic Nanoreactors center, which is being launched with a $10 million grant from the DOE. Researchers at 10 US universities and three national laboratories will carry out the center’s four-year mission to understand, predict and control solar water-splitting nanoreactors in isolation and as ensembles.

“The Ensembles of Photosynthetic Nanoreactors project will strive to advance the frontiers of discovery and fundamental interdisciplinary knowledge in photochemical energy conversion basic research, thereby helping to train the next generation of diverse scientists and engineers who will positively impact our planet,” said Ardo. “Moreover, outcomes of the project may be transformative, providing critical details to inform a route to meeting the DOE’s Hydrogen Shot Initiative goals.”

Finkeldei, a UCI assistant professor of chemistry, received a $4.3 million grant from the DOE Basic Energy Sciences program for a project to improve the safety and durability of the nation’s nuclear power facilities. Many next-generation reactors, including small modular reactors, are expected to operate for longer periods under more extreme temperature and irradiation conditions. Finkeldei’s team, which includes Shen Dillon, UCI professor of materials science and engineering, and scientists at Los Alamos National Laboratory, will conduct atomic- and molecular-scale examinations of the way defects form in advanced nuclear materials. Based on their in-depth investigations about the nuclear materials’ behavior under extreme conditions, they aim to contribute to the development of new fuel types for next-generation nuclear power plants.

“Nuclear power, which currently supplies about 20 percent of our electricity, is a broadly deployable source of continuous and stable energy and will play a key role for decarbonizing the energy sector,” said Finkeldei. “With this project, we hope to provide a strong basis of knowledge upon which to build a safe, efficient and reliable source of power.”

Yang, a UCI professor of chemistry, is the director of 4C, the Center for Closing the Carbon Cycle, which seeks to advance the fundamental science behind CO2 capture and conversion. With a DOE grant of more than $10 million, Yang will direct researchers from 12 universities and three national laboratories as they work to gain a thorough understanding of the chemicals needed to absorb CO2 from various emission sources and how to link processes of carbon capture and conversion to make useful products, such as fuels and industrial chemicals from acquired CO2.

James Bullock, dean of UCI’s School of Physical Sciences, said, “UCI’s Department of Chemistry has been driving research that tangibly improves the world since its earliest days. These three initiatives will ensure that UCI’s leadership and progress in this area will continue for years to come.”

“This substantial funding from the Department of Energy is a sign that the United States government places a high value on the caliber and quality of the research happening at UCI,” said UCI Vice Chancellor for Research Pramod Khargonekar. “Our institution has also made a financial commitment to the success of these projects. Professors Ardo, Finkeldei and Yang have the full backing of UCI as they pursue solutions to address climate change, the most critical problem facing humanity.”

UCI’s Brilliant Future campaign: Publicly launched on Oct. 4, 2019, it aims to raise awareness and support for the university. By engaging 75,000 alumni and garnering $2 billion in philanthropic investment, UCI seeks to reach new heights of excellence in student success, health and wellness, research and more. The School of Physical Sciences plays a vital role in the success of the campaign. Learn more at https://brilliantfuture.uci.edu/physicalsciences.

About the University of California, Irvine: Founded in 1965, UCI is the youngest member of the prestigious Association of American Universities and is ranked among the nation’s top 10 public universities by US News & World Report. The campus has produced five Nobel laureates and is known for its academic achievement, premier research, innovation and anteater mascot. Led by Chancellor Howard Gillman, UCI has more than 36,000 students and offers 224 degree programs. It’s located in one of the world’s safest and most economically vibrant communities and is Orange County’s second-largest employer, contributing $7 billion annually to the local economy and $8 billion statewide. For more on UCI, visit www.uci.edu.

Media access: Radio programs/stations may, for a fee, use an on-campus ISDN line to interview UCI faculty and experts, subject to availability and university approval. For more UCI news, visit news.uci.edu. Additional resources for journalists may be found at communications.uci.edu/for-journalists.