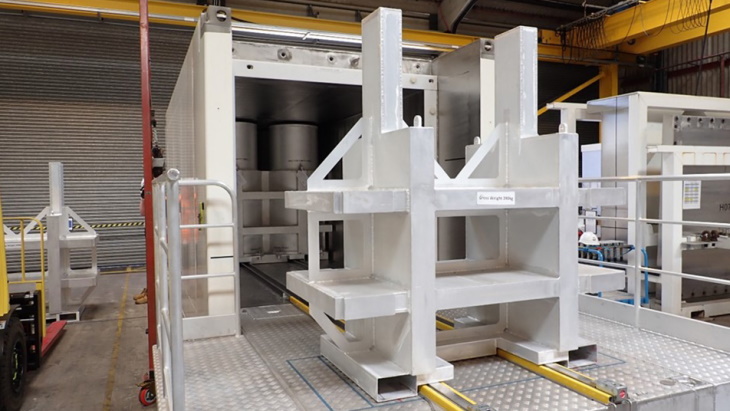 Drums of intermediate-level waste are loaded into a Gemini package at Harwell (Image: Magnox)

Around 800 concrete-lined drums of intermediate-level radioactive waste will be transferred over the next three years for interim storage at Sellafield under the project, which forms a critical part of the NDA’s Nuclear Materials Transfer (NMT) programme, ahead of eventual disposal in a geological disposal facility.

Orano TN manufactured and delivered three TN Gemini specialist packages to the NDA in early 2000. These had been used to transport waste drums from waste management company LLW Repository Ltd (LLWR) to Sellafield for a couple of years from 2006 but then remained unused for several years before being released to Magnox.

Orano TN was awarded a contract in June 2018 by LLWR that included the modernization and maintenance of the three Gemini packages, owned by the NDA, with the supply of logistical equipment approved by the French Nuclear Safety Authority that will facilitate the transport of legacy waste stored on Magnox sites in TN Gemini containers.

As part of Nuclear Waste Services’ (NWS’s) Type B programme, the three TN Gemini packages spent two years in France with Orano NPS undergoing a condition assessment and refurbishment before undergoing extensive site acceptance testing at Sellafield and Harwell to ensure their readiness for a return to service.

“The Gemini fleet was brought back into service specifically for its role in this project and the launch of shipments is a major milestone for the NDA Site Decommissioning and National Waste Management Strategy, its Nuclear Material Transfer Programme, and for NWS’s Type B Packaging Programme, ” said NWS Type B Program Manager Steve Chester.

“Teamwork proved vital to the success of the project with an integrated programme/project management strategic approach adopted, led by NWS, with Sellafield, Magnox and Orano NPS, to manage risk and respective site interfaces, and drive efficiencies wherever possible.”