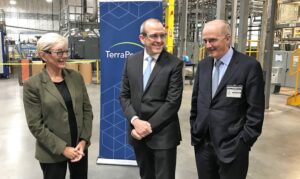 When you think of southwest Everett, Washington and the industrial center here you likely think of aircraft assembly and lately, package delivery, but there is a whole lot more going on in the southwest Everett area.

In 2020 TerraPower, a firm backed by Bill Gates and based in Bellevue, Washington opened a 65,000 square foot research and testing facility in Everett. On any given day 50 – 75 highly trained physicists, engineers, project managers and operators are developing solutions to tackle large-scale global challenges through nuclear innovation. Here’s a snip of the current Everett job postings on the TerraPower career page for the Everett Research Facility. 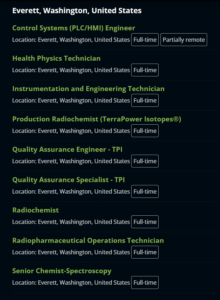 Here’s a list of the Everett openings on TerraPower’s career page.

Today Jennifer M. Granholm, Secretary of the US Department of Energy, visited the TerraPower Research Facility in southwest Everett, Washington for an in-person update on research being conducted here to develop a sodium-fueled fast nuclear reactor that can be built quickly and used in a variety of places.

“We are in a worldwide nuclear competition and thanks to public partnerships like this we are no longer on the sidelines but leading the way,” Secretary Granholm said in a brief Q&A with reporters after touring the 65,000 square foot research facility Monday morning.

TerraPower calls itself a Nuclear Innovation Company. The reactor design they are working on is called sodium and they describe the process this way: 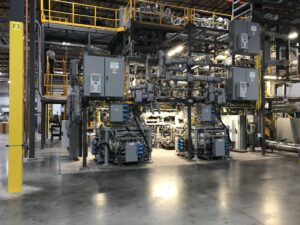 One of three test areas inside the Everett Research Facility.

The sodium plant uses a sodium-cooled fast reactor as a heat source. This heat from the reactor is carried by molten salt from inside the nuclear island to heat storage tanks outside the reactor building, where it is utilized as needed for generating electricity or industrial processes. The net effect is that the overall plant can follow load, thus increasing the revenue and value of the plant while maintaining the optimum constant reactor power. At the same time the cost of the overall plant is reduced since many of the systems outside of the nuclear island need not be nuclear safety grade. The sodium reactor enables these abilities because it operates in much higher temperature regimes than the light water reactor, thus pairing well to the temperature requirements of the molten salt heat transfer medium.

Sodium reactors are uranium fueled. No sodium reactor—from the demonstration plant, to the first set of commercial plants, or the subsequent larger plants—will use plutonium as a fuel. Both the demonstration plant and the first set of commercial plants will run on high-assay low-enriched uranium (HALEU). Sodium plants will not require reprocessing and will run on a once-through fuel cycle that limits the risk of weapons proliferation. Natrum technology will, nonetheless, reduce the volume of waste per megawatt hour of energy produced at the back end of the fuel cycle, by five times, without any reprocessing because of the efficiency with which it uses the fuel.

Here are links to the three different areas of research that TerraPower is conducting in Everett, Washington.

The first sodium reactor will be built in Wyoming with many of the technologies used by TerraPower having first been tested at the Everett lab. 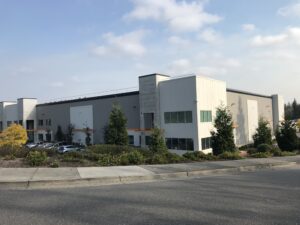 There are a lot of amazing things happening inside those buildings in southwest Everett.

Here’s how TerraPower sums up what they do in Everett, Washington and at the rest of their facilities.

TerraPower’s innovators create technologies to provide safe, affordable and abundant carbon-free energy. They devise ways to use heat to drive economic growth while decarbonizing industry. And they develop processes to extract radioisotopes for medical use in life-saving cancer treatments.

You can click here to learn more about the company.