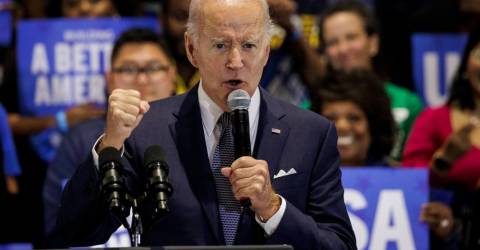 US in talks to expedite construction of Australia’s first nuclear submarines: Reports

WASHINGTON: The Biden administration is in the middle of discussions to expedite the construction of Australia’s first nuclear-powered submarines as guaranteed in the AUKUS defense pact, reported Sputnik.

According to the Wall Street Journal on Friday, citing Western officials, the United States wants to build the first several nuclear-powered submarines for Australia and provide it with a submarine fleet by the mid-2030s in response to China’s growing military power.

The United States’ recommendation has not yet been formally approved, but a final decision on this matter is expected in March, the report said.

The report also highlighted the challenges the United States would face to complete the task, including the need to secure billions of dollars to expand its submarine production capacity and a contribution from Australia to back the effort.

The White House said in a press release on Friday that Australia, United Kingdom and the United States – the countries that comprise the AUKUS security pact – have made significant progress toward ensuring that Australia would acquire conventionally armed, nuclear-powered submarines. The AUKUS allies will provide the submarines at the earliest possible date, the release said.

In September, the three allies announced the new trilateral security partnership, forcing Australia to abandon its US$66 billion contract with France to receive 12 state-of-the-art conventionally-powered attack submarines from the United States.

In May, the Chinese Foreign Ministry said the AUKUS security pact is provoking an arms race in the South Pacific without any consultation with island countries of the region. – Bernama