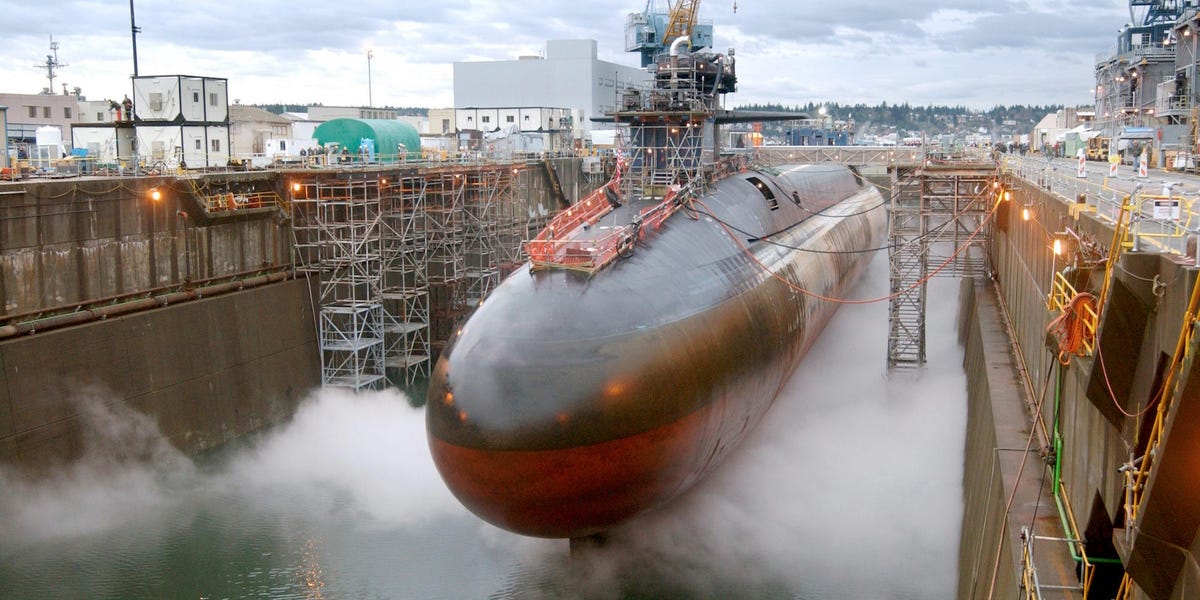 On June 4, the US Navy laid the keel for USS District of Columbia, the first of its new Columbia-class nuclear-powered ballistic-missile submarines, at an Electric Boat facility in Quonset Point, Rhode Island.

The high-profile event was attended by both Adm. Daryl Caudle, commander of US Fleet Forces Command, and Secretary of the Navy Carlos Del Toro, who said the Columbia class “will be the cornerstone of our strategic deterrence” and “the ultimate guarantor of our national security.”

Lingering over this major milestone, however, are longstanding problems for the Columbia program — unexpected delays and technical difficulties that may limit the Navy’s ability to deliver nuclear and conventional missiles.

Compounding these problems is a recent report from the Government Accountability Office that, in addition to cataloging difficulties in the Columbia program, noted that the program’s overall cost has increased by another $3.4 billion to a projected $112 billion.

With nuclear-powered ballistic-missile submarines (classified as SSBNs) carrying 70% of America’s deployed nuclear arsenal, the prospect of delays has led the Navy to consider extending the life of some of its older SSBNs, even though some are close to the end of their own service lives.

A welder welds the initials of Rep. Eleanor Holmes Norton, sponsor of the future USS District of Columbia, on a metal plate during a ceremony at Quonset Point, June 4, 2022.


At 560 feet long, 43 feet wide, and displacing 20,810 tons, the Columbia class will be the largest submarines ever built by the US.

In addition to Mk 48 Advanced Capability torpedoes, the subs will carry 16 Trident II D5 submarine-launched ballistic missiles, each of which has a range of over 7,500 miles and can carry up to eight multiple independently targetable reentry vehicles.

The boats will have a service life of 42 years and have a number of upgrades and improvements over their Ohio-class predecessors, including “superior acoustic performance and state-of-the-art sensors to make it the most capable and quiet submarine ever built ,” according to the Navy.

One significant improvement is that each Columbia-class boat’s reactor will not ever need to refuel during the planned service life, making the reactors more cost-efficient and allowing the subs to be operational for longer periods.

The Columbia-class is also being developed jointly with the British Royal Navy’s Dreadnaught-class SSBN. Both classes will have the Common Missile Compartment, a section of the submarines jointly developed by US-based Electric Boat and UK-based BAE Systems that will house the SLBMs. Both boats will also be armed with the Trident II D5s.

The Navy plans to build a total of 12 Columbia-class boats. Construction of USS District of Columbia is now underway and construction of the second, USS Wisconsin, will start in March 2024.

Eighteen Ohio-class SSBNs were built between 1976 and 1997. In 2002, the Navy determined that it could meet US strategic nuclear needs with 14 Ohios and decided to convert the four oldest boats — USS Ohio, USS Michigan, USS Florida, and USS Georgia — into cruise-missile submarines.

USS Ohio in a dry dock during its conversion into a guided-missile submarine, August 14, 2003


Reclassified SSGNs, these boats traded their torpedoes and ballistic missiles for up to 154 Tomahawk land-attack cruise missiles, which are launched from the subs’ refitted missile tubes.

Two of the tubes were converted into swimmer lockout chambers, which, along with the ability to mount a dry-deck shelter holding a SEAL Delivery Vehicle or inflatable boats, allows the SSGNs to carry and deploy 66 special-operations troops for covert missions.

The Ohios originally had service lives of just 30 years, but because they perform such a vital mission, the Navy increased that to 42 years.


USS District of Columbia is planned to be delivered in 2027, with initial operating capability expected in June 2030 and its first patrol in 2031. The Ohios, all but five of which have been in service for 30 years or longer, are expected to be decommissioned between 2027 and 2040.

That is a tight timeframe, especially considering the importance of SSBNs in the US’s nuclear posture. Cost overruns and delays in major Navy acquisition programs are not uncommon, and the Navy is now thinking about extending the lives of up to five Ohio SSBNs in case its new subs run into trouble.

“We’re doing evaluations right now on what it would take to do a short repair availability — short-ish repair availability — to extend those ships for a couple of years as a risk mitigator, if need be,” Rear Adm. Scott Pappano, program executive officer for strategic submarines, said at an event hosted by the Advanced Nuclear Weapons Alliance Deterrence Center in May.


The four Ohio-class SSGNs, the youngest of which is 38 years old, are to be replaced by the Virginia-class Block V nuclear-powered attack subs.

The Block V Virginias are designed with an 84-foot extension known as the Virginia Payload Module, which adds four tubes capable of firing seven missiles each, allowing the new subs to launch 65 torpedo-size weapons.

Ohio-class SSGNs also have an important role in the US arsenal, and Pappano said the Navy is considering extending their service lives as well.

“Until that [Block V Virginia] comes online, we want to make sure we have the missile-shooter capability in the SSGNs for as long as we can, but it’s going to be a delicate balancing act of maintaining the current SSBN fleet vs. extending the SSGN fleet,” Pappano said in may

USS Florida launches a Tomahawk cruise missile in the waters off the Bahamas, January 14, 2003.


The Government Accountability Office report complicates things. In addition to a ballooning price, the report said the Navy has assessed that there is “medium risk” to the Columbia program’s ability to meet its accelerated building schedule.

The report identified construction issues and disruptions caused by Covid-19 as reasons for potential delays on the Columbias. Shipbuilders have also pulled workers from the Virginia-class program to work on the Columbia class, contributing to delays on the newest Virginias. These factors increase the likelihood that Ohio-class SSGNs will need to remain in service.

For now, the Ohio-class life-extension plan is only in the evaluation stage. Construction continues on the Columbia class, which the Navy has said is its top priority.

“The venerable Ohio-class that has guarded us for decades is nearing the end of its service life,” Del Toro said at the keel-laying ceremony in June. “For the safety of our sailors, and the security of our world, we must modernize our fleet.”