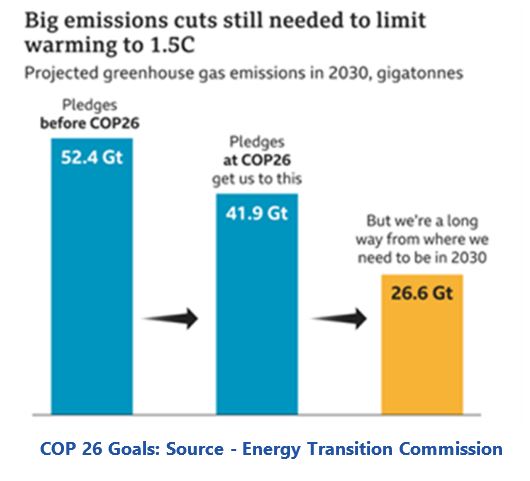 The culmination of the American Clean Power (ACP) sponsored offshore wind conference in Boston, Massachusetts in October 2021 was the start of construction for the U.S. offshore wind industry with the 800 MW Vineyard wind project. Vineyard Wind LLC is one of many offshore wind development companies whose projects are progressing. Vineyard Wind is 50 percent owned by Copenhagen Infrastructure Partners (CIP) and 50 percent owned by Avangrid Renewables, LLC. The project will use 62 GE Halide-X wind turbines rated at 12 MW, each mounted 1 mile apart approximately 30 kilometers off the coast of Martha’s Vineyard.

The world is producing too much CO2: the solution starts with creating a clean power grid

The COP 26 conference in Glasgow just a few weeks ago shows how world leaders are pledging to reduce greenhouse gas emissions, which have already warmed the global average temperature of our planet 1.09 ° C above the 1850-1900 average ( based on data for 2021 from January to September). The goal of COP 26 was to limit the warming of our planet by more than 1.5 degrees by 2100 and to transition to a sustainable net-zero energy system by 2050. It begins by first generating electrical energy without generating CO2 and then converting transportation, HVAC and industrial processes from fossil fuels to clean electricity. The move from coal to gas power generation has made some progress towards clean energy, but it is now becoming more difficult to find low carbon substitutes for gas. Much less progress has been made in decarbonising transportation, building heating and industrial processes, partly because of the high proportion of fossil-fueled electricity. The overall goal of bringing our entire energy system to zero CO2 emissions by 2050 is a challenge; and there is an urgent need for progress to be made before 2030 as new greenhouse gas emissions build up in our atmosphere and cause temperatures to rise in the future.

New power plants will be needed to get to low-carbon electricity by 2030, but how does offshore wind compare? What realistic options are there? Carbon Capture Utilization and Storage (CCUS) technology has been shown to collect most of the CO2 from fossil fuel power plants, but it significantly increases the cost of capital and also requires higher gas consumption than traditional gas-fired combined cycle power plants. To make CCUS economically attractive, natural gas would have to cost around US $ 100 per tonne of CO2. To stay within 1.5 ° C, the International Energy Agency estimates that we will need to capture 350 million tons of CO2 per year by 2030. We currently capture less than 1 percent of our annual emissions.

Nuclear power is also a well-known scalable zero-carbon option, but current nuclear power concepts like SWR, PWR CAN-DU, RBMK are rarely built today for cost and safety reasons, especially after a decline in public support following the Chernobyl and Fukushima accidents. New advanced nuclear reactors such as Generation IV reactors, the Small Modular Reactor (SMR), and the Liquid Fluoride Thorium Reactor (LFTR) promise passive safety and lower costs. While some of these reactors are being upgraded to demonstration facilities, it is unlikely that nuclear will be able to provide significant capacity before 2030, as the safety review, obtaining regulatory approvals, ramping up production and completing the site construction is long to take.

Solar, Wind, and Batteries (SWB) is the option that most US electric utilities expect for the majority of new power generation over this period. The cost of solar, wind, and lithium batteries have dropped so low that they have become the cheapest source of new electricity. By the time clean generation is operational, fossil fuel consumption is likely to increase. The IEA Oil 2026 report estimates that global oil consumption will rise to around 104.1 mbpd by 2026, an increase of 4.4. Millions since 2019 (pre-COVID). It was low natural gas prices that made coal and some nuclear power plants too expensive to run. Now it is SWB that sells natural gas in many places.

The grid operator ISO New England plans that offshore wind will account for around two thirds of the new generation capacity by 2030. This amount of wind power is a completely new way of generating electricity from a grid reliability perspective. ISO New England examines the reliability of the future network in a number of scenarios to help ISO; and stakeholders understand the implications for operations, broadcast planning, and market design. Reliability risks in extreme weather events are increased by government restrictions on CO2 emissions. The electricity forecasts also rise with more electric vehicles and more HVAC electrification with new consumption peaks in winter due to building heating. In order to integrate new offshore generation into the New England transmission network, changes to the regional transmission planning tariff will be required, including a new cost allocation method for improved transmission and ways to promote the necessary grid energy storage.

If you would like to purchase this report or for information on how to become a customer, please contact us

The UK’s Future Nuclear Deterrent: The 2021 Update for Parliament – GOV.UK

Jasper Board deals with potential backlogs in the supply chain