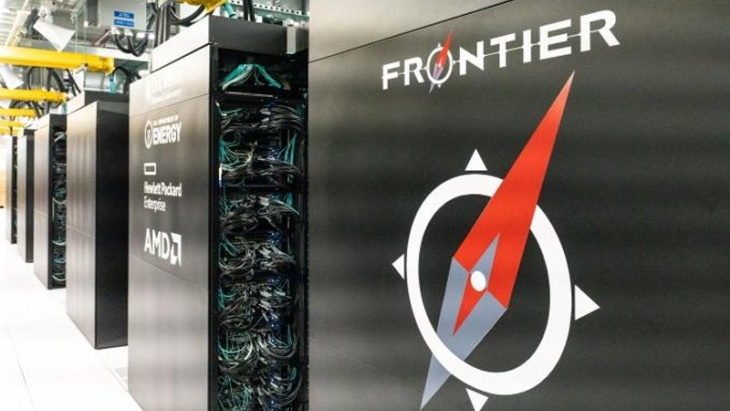 The US Department of Energy’s (DOE) Frontier supercomputer system at Oak Ridge National Laboratory (ORNL) has been ranked as the fastest computer in the world, as well as becoming the first to break the exascale performance barrier.

According to ORNL, Frontier was announced as the world’s fastest computer on the 59th TOP500 list on 30 May, with 1.1 exaflops of performance. The system is the first to achieve exascale, a threshold of a quintillion calculations per second. The HPE Cray EX supercomputer also claimed the number one spot on the Green500 list, which rates energy use and efficiency by commercially available supercomputing systems, with 62.68 gigaflops performance per watt.

“Frontier is ushering in a new era of exascale computing to solve the world’s biggest scientific challenges,” said ORNL Director Thomas Zacharia. The milestone is the result of more than a decade of collaboration between US national laboratories, academia and private industry, including DOE’s Exascale Computing Project, he added.

Frontier is a collaboration between DOE and US technology companies HPE and AMD, and work to deliver, install and test the system began during the COVID-19 pandemic. Its theoretical peak performance of 2 exaflops, or two quintillion calculations per second, make it ten times more powerful than ORNL’s Summit system, and it will enable researchers to address problems that were previously impossible to solve. The system will continue to undergo testing and validation, and is on track for final acceptance and early science access later in 2022. It is expected to be open for full science access at the beginning of 2023.

Exascale systems will provide the next-generation of computing needed for climate change research and prediction, materials design for energy technologies and fusion reactors, a stronger and more adaptive power grid, the data-driven design of new COVID treatments, rapid data analysis for scientific Facilities such as light sources, and many other challenges in energy, environment, and national security, according to Barb Helland, the DOE Office of Science’s associate director for advanced scientific computing research.

Frontier is part of a “constellation” of exascale systems developed under DOE’s seven-year Exascale Computing Initiative (ECI), co-led by the Office of Science and the NNSA, Helland said. A second Office of Science system expected to exceed 2 exaflops, Aurora, will premiere in late 2022 at Argonne National Laboratory, while the DOE National Nuclear Security Administration (NNSA) is working towards starting up its own exascale supercomputer, El Capitan, in 2023.

The NNSA on June 8 announced the formal completion of construction on the Exascale Computing Facility Modernization project, which has upgraded the electrical and mechanical capabilities of the Livermore Computing Center to enable it to power the El Capitan system. NNSA in early May approved the formal completion of construction and the beginning of the transition to operations of the project at the Lawrence Livermore National Laboratory.