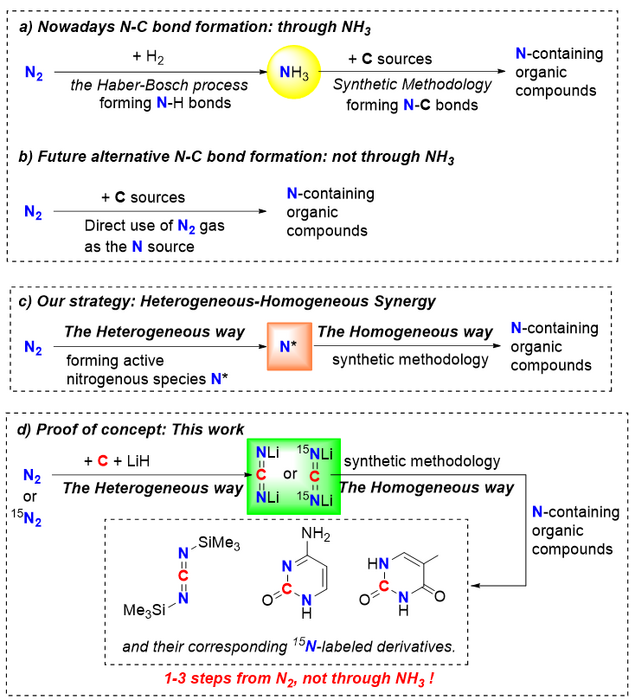 image: (a) Current production and application of NH3. Almost all synthetic nitrogenous organic compounds are synthesized from NH3. (b) Synthesis of N-containing organic compounds directly from N2 molecule and carbon sources. (c) Our general strategy to achieve the above goal: taking advantage of the heterogeneous process to generate active intermediate nitrogenous species, followed by taking advantage of the homogeneous synthetic methodology to make value-added organic compounds. (d) This work as proof of concept. Through a heterogeneous process, the N2 gas was first fixed with carbon and LiH to form reactive Li2CN2, which was then transformed into nitrogen-containing organic compounds through the homogeneous synthetic methodology.
view more

Elemental nitrogen is essential to life and human society. Nowadays, however, almost all the N atoms in artificial N-containing compounds come from NH3 that is mass produced from the Haber-Bosch process developed at the beginning of the 20th century. Although the Haber-Bosch process is one of the greatest inventions in human history, it puts great pressure on our environment and energy.

“If we could synthesize complex organic compounds directly with dinitrogen and carbon bypassing ammonia, it will reduce operation procedures and thus may save a lot of energy and create huge economic value for the society.” says the study’s corresponding author Zhenfeng Xi, professor at the Department of Chemistry, Peking University.

In this study, researchers proposed a homogeneous-heterogeneous synergy strategy to solve this problem. The N2 gas is first turned into an active-enough nitrogenous species (N*) through a heterogeneous process. Then a subsequent homogeneous reaction is performed to construct complex nitrogen-containing organic compounds, taking advantage of both research methodologies.

In detail, the N2 gas and carbon were first fixed with LiH in a homemade reactor at 550 ºC (heterogeneous process), forming the reactive intermediate called Li2CN2 with high selectivity and efficiency. Then the Li2CN2 was transferred to a glass flask and used as an organic synthon to construct the carbodiimide and pyrimidines, building blocks of DNA/RNA (homogeneous process).

Moreover, using 15N2 as the feedstock, the corresponding 15N-labeled carbodiimide and pyrimidines could also be efficiently prepared, which might have a wide range of applications in biochemistry.

“Hydrides (H-) here play a peculiar role in our dinitrogen fixation. It directs a different reaction pathway for N2 fixation and transformation compared to conventional transition metals, making the reaction gentle and controllable. Our products could be obtained easily on a gram scale in the laboratory. Further amplifying the production by using a larger reactor equipped will be straightforward.” says the study’s corresponding author Ping Chen, professor at Dalian Institute of Chemical Physics, Chinese Academy of Sciences.

The homogeneous-heterogeneous synergy strategy outlined here differs from those previous strategies. Typically, forming the CN bonds from N2 gas requires the reduction of N2 to make it react with carbon electrophiles. However, under most conditions, reducing agents are incompatible with carbon electrophiles. In this work, the incompatibility problem has been solved by directly using the element carbon as the carbon source.

The researchers plan to follow up on this strategy in the future to synthesize more useful organic compounds.

The study was funded by the Basic Science Center of Transformation Chemistry of Key Components of Air, National Natural Science Foundation of China (No. 21988101). There are no reported conflicts of interest.

Disclaimer: AAAS and EurekAlert! are not responsible for the accuracy of news releases posted to EurekAlert! by contributing institutions or for the use of any information through the EurekAlert system.