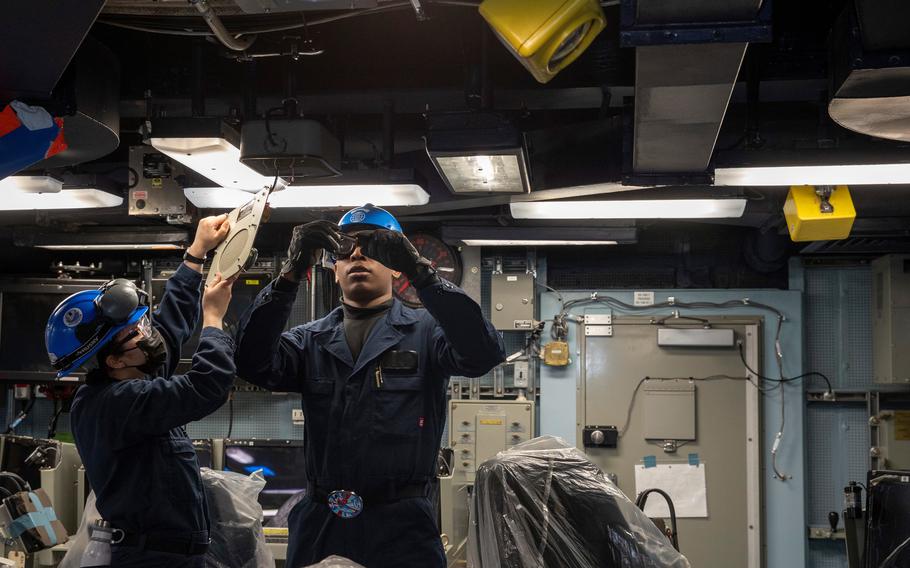 Amendments included in a House draft of the 2023 defense policy bill would pay an additional $200 per month to sailors working on ships docked for nuclear refueling and complex overhauls, subsidize the cost of moving closer to the shipyard, and force the Navy to confront low morale caused by poor working and living conditions aboard the vessels.

The legislation sets a staffing floor of four behavioral health specialists per aircraft carrier and requires the Navy to fill at least 75% of billets on ships undergoing extensive overhauls. It also requires Navy leadership to include the ships in under-staffing reports and provide Congress with additional reports on the feasibility of limiting tour lengths for first-term sailors to two years and improving housing and parking options for sailors with long commutes.

The proposals initiated by Reps. Jackie Speier, D-Calif., and Navy veteran Elaine Luria, D-Va., follow a rash of suicides among the crew of USS George Washington, which saw three sailors take their own lives in the span of a week in April. Seven sailors assigned to the aircraft carrier have died in the past year.

The George Washington has been docked at the Newport News shipyard in Virginia since 2017 for a mid-life overhaul that includes the refueling of the ship’s two nuclear reactors. The process has stretched well beyond its typical four-year length and is now scheduled for completion in March 2023.

“Certainly, there’s a problem there,” he said. “We’ve got to understand what the problem is a bit more and then we have to figure out what to do to ensure we don’t have these kinds of problems in the future.”

Most of the George Washington’s 2,700 crew members went home after their shifts but about 400 sailors lived aboard the ship before the Navy made accommodations for more than helped of them to move off-site in May. Sailors told reporters and lawmakers that they suffered through constant construction noise, power outages, a lack of hot water and mundane repair work that sharply contrasted with the jobs that they had enlisted to do.

“In early May, I met and spoke with junior enlisted sailors and Navy leadership aboard USS George Washington, and it was clear that the status quo aboard ships undergoing RCOH is not acceptable,” Luria said in a statement, referring to refueling and overhaul.

A government watchdog report in February found morale and mental health issues cropped up among sailors even during intermediate maintenance periods, defined by the Navy as minor work that can allow a ship to get underway within four days for a mission.

Ten ship crews interviewed for the report said workforce shortages and long, demanding workdays led to sailors taking leave for mental health evaluations, according to the Government Accountability Office. One ship’s crew members said they lost one person to suicide and a dozen other personnel experienced mental health problems during a period of seven months.

Russell Smith, master chief petty officer of the Navy, told lawmakers last month that sailors on the precipice of suicide must wait an average of five weeks for a mental health appointment. In April, Smith stood before the crew of USS George Washington and said sailors needed to temper their expectations for life aboard a ship undergoing an overhaul.

“I understand that we still have a problem and the department has been focusing on it, but the problem is beating suicide is like beating cancer,” he said. “There are many different causes, many different reasons.”

Suicide is one of the Navy’s top three causes of death annually, according to a March news release by the Navy Sailor Assistance and Intercept for Life, an intervention program for sailors at risk of suicide.

The Navy has launched two investigations into the George Washington suicides, one focuses specifically on the ship while another examines command climate and culture issues on ships undergoing overhauls at shipyards, including housing, parking and quality of life.

A similar pattern of suicides occurred in 2019 among the crew of the USS George HW Bush, which was going through a restoration in Virginia. Five sailors assigned to the aircraft carrier died by suicide in three months, three of them within one week.

The rate of suicides among active-duty troops has spiked 40% in the past five years, with the Army bearing the brunt of the increase. In 2020, 19 out of every 100,000 sailors died by suicide, compared to 36 of every 100,000 soldiers, according to the most recent Pentagon statistics.

Lawmakers inserted multiple provisions to reverse the trend into drafts of the 2023 National Defense Authorization Act, a sweeping bill that sets policy and funding levels for the Pentagon. A group of measures single out Alaska, where deaths on remote military installations doubled between 2020 and 2021.

Alaska-specific amendments approved this week would give service members special pay for cold-weather operations, internet allowances and travel grants to help offset the state’s high cost of living and alleviate isolation. Other proposals aim to beef up the behavioral health workforce and improve service member access to it.

Chris Ford, an Air Force veteran who now serves as CEO of the group Stop Soldier Suicide, said Friday that he was “sharply disappointed” with the ideas floated by lawmakers. While quality-of-life improvements are important, Congress is still not going far enough to address the root causes of the military’s suicide problem, he said.

“The number one barrier is stigma within the Department of Defense,” Ford said. “Service members are fearful to ask for mental health care because they’ve seen too many of their peers or superiors or subordinates do that and be discharged from service or lose their clearance or lose their access to firearms, depending on their specialty. So instead of raising their hand to ask for help, they’re suffering in silence and taking their life.”