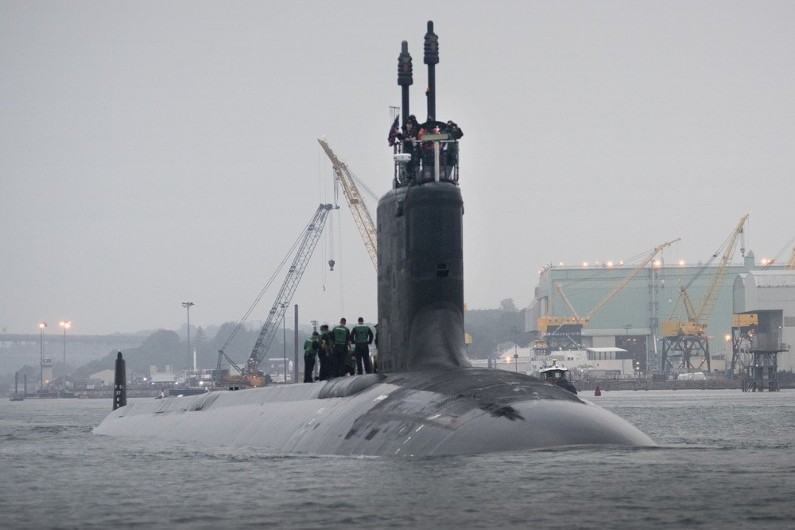 For a routine visit, on a routine deployment, defense minister Richard Marles is plenty excited about the USS Mississippi, a very large nuclear-powered Virginia Class fast-attack submarine that not-so-quietly slipped into Fleet Base West, better known as HMAS Stirling, located off the coast of Perth.

The latest movement in Australia’s strategic dance to get nuclear-powered subs under the AUKUS agreement, the Mississippi’s overt visit and attendant official ceremonies are part of a growing local showcase of military-equipment makers intent on securing Australia’s business.

Smaller (and cheaper) than the gargantuan Ohio Class ballistic missile submarines that previously could carry as many as 150 Tomahawk cruise missiles (or 24 Trident multiple-warhead ballistic missiles), Virginia class subs are slated to number around 34 over the life of the program .

The Virginia boats are essentially the bulk-buy of the US combat submarine fleet, providing maritime hunt and attack capability as well as being a surveillance and weapons launch platform.

The fact that there are plenty of them and that there is still life in the construction cycle makes them potentially attractive to Australia, because they are a known quantity with an established skills base that could be transferred here under the AUKUS arrangement.

Marles has already had a Mississippi sneak peek.

“I had the opportunity to tour the USS Mississippi as part of my visit to Pearl Harbor in Hawaii last month, alongside US Defense Secretary Lloyd Austin,” Marles said.

“It is a pleasure to welcome the crew to Western Australia this week, for this routine visit. Their stay in WA will provide those on board with much-needed respite as they continue to ensure a secure and prosperous Indo-Pacific.”

For the 132 crew as listed by the US Navy (15 officers; 117 enlisted), that means time outside the tin can that reportedly skulks underwater for at least three months.

The Albanese government is also trying to normalize the visitation to Australia of nuclear vessels as very much business as usual.

“Since 1960, Australia has hosted over 285 visits by UK and US nuclear-powered vessels with over 1840 total days in port,” Marles’ statement said.

“The USS Mississippi is the second US nuclear-powered vessel to visit Australia in 2022, following a visit by the USS Springfield in April.

“The visit reflects the ongoing strength of Australia’s alliance with the United States and builds on previous visits of nuclear-powered submarines from our AUKUS partners.”

“After a busy year operating with the US Navy across the Indo-Pacific, it’s a privilege to welcome our friends to Western Australia,” Hammond said.