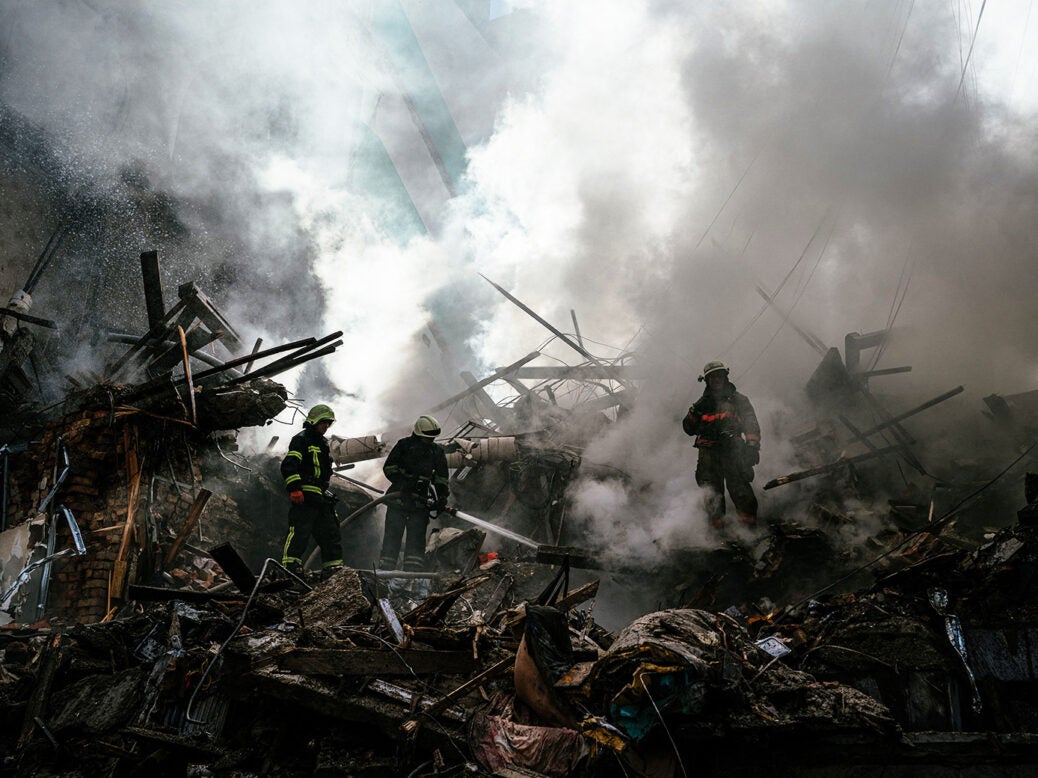 Vladimir Putin’s nuclear threats must not deter the West

As we approach the 60th anniversary of the Cuban Missile Crisis, we have not been short of reminders that the danger of nuclear war has not gone away. A common theme of commentary on the desperate situation Russia now faces in Ukraine is that this could lead, almost any day now, to a global catastrophe. All it would take would be a wild decision by Vladimir Putin, looking for a way to turn the tide of a war that he now looks likely to lose.

President Joe Biden made the connection between the Missile Crisis and the current war on 6 October when he warned that Putin has brought the world closer to Armageddon than it had been since the Cuban crisis. Speaking at a fundraiser event, he made it clear he took the threat seriously: “He’s not joking when he talks about potential use of tactical nuclear weapons or biological or chemical weapons because his military is, you might say, significantly underperforming.” Putin might try a small-yield nuclear weapon in the belief that its impact would not extend beyond the battlefield but Biden expressed his doubts that such weapons could be used “and not end up with Armageddon”.

The nuclear danger must be taken seriously, especially when we see a nuclear power losing a war in a humiliating fashion to a non-nuclear power, getting pushed out of territory it has claimed for itself, and showing callous disregard for human life when striking Ukrainian cities as Russia did on 10 October.

Yet precisely because this is such a dangerous situation we need to examine what is being said and done carefully. When Putin said he was not bluffing about the nuclear threat in a speech on 20 September it was not in connection with tactical use, let alone chemical or biological use (which he has not explicitly threatened). It was about reinforcing his core red lines – direct Western intervention in the war and direct and sustained attacks on Russian territory. Here deterrence has worked for him. Biden has taken these red lines seriously from the start of the war, even as he ramped up other forms of assistance to Ukraine.

Nor is it clear why the use of a single or even a few, small-yield nuclear weapons would lead to an inexorable escalation. Whatever the international shock value of these weapons, their main purpose would be to influence the battles currently underground. This would not be simple.

Select and enter your email address

Quick and essential guide to domestic and global politics from the New Statesman’s politics team.

A weekly newsletter helping you fit together the pieces of the global economic slowdown.

The New Statesman’s global affairs newsletter, every Monday and Friday.

The best of the New Statesman, delivered to your inbox every weekday morning.

The New Statesman’s weekly environment email on the politics, business and culture of the climate and nature crises – in your inbox every Thursday.

Our weekly culture newsletter – from books and art to pop culture and memes – sent every Friday.

A weekly round-up of some of the best articles featured in the most recent issue of the New Statesman, sent each Saturday.

A newsletter showing the finest writing from the ideas section and the NS archive, covering political ideas, philosophy, criticism and intellectual history – sent every Wednesday.

American intelligence has been remarkably effective in watching all military movements. When the US says that no signs of preparations for nuclear use have been picked up, this suggests that actual preparations would be picked up. Moscow could face an international uproar before they had a chance to fire them. Otherwise friendly states such as China and India have made it clear that they oppose nuclear use.

Then Putin would need to be sure that everyone in the chain of command followed orders. With such a unique operation there would be opportunities to raise doubts. Many things could go wrong: the delivery vehicles might be intercepted by Ukrainian air defences; they might land away from their targets, because they are often inaccurate; in doing so they might take out Russians as well as Ukrainians; and they might turn out to be duds, because the Russians have problems maintaining their weapons and these ones have never been tested properly. Even if the weapons work as expected they might not make much difference to the course of the war, because the Ukrainians, who have already suffered serious casualties and seen vicious attacks on their cities, will carry on advancing.

Should the threshold be crossed Moscow has no idea how the US and Nato would react. Biden’s statement implies that at some point an escalatory process could draw in American nuclear weapons, although reports suggest conventional responses – which could still do a lot of damage to the Russian war effort. Because a range of types of strike have been discussed – from demonstrations to attacks on Kyiv – it is hard to be more specific. In private conversations with Russians as well as public statements, warnings have been communications about the potential severity of the response. For this reason, it is hard to imagine that the news that these weapons were about to be, or had already been used, would be greeted by the Russian population with equanimity. The reaction to mobilization, where hundreds of thousands of Russians fled the country, demonstrated that anxiety levels are already high. The prospect of retaliation in kind could well lead to panic.

These are all the reasons that nuclear use remains unlikely. Because it is not impossible, it requires careful attention – but it is unwise to fixate on this particular danger when the situation is so fluid in many other respects. As we have seen too often in this war, and again on 10 October as cities across Ukraine were targeted, Moscow still has means of causing death and destruction against civilians that it feels it can use with impunity, precisely because its nuclear deterrent precludes retaliation against Comparable targets in Russia.

The war will end when Moscow has to come to terms with the failure of its war. When this moment comes, US diplomats will play an important role. There are also issues connected with Ukrainian reconstruction and the postwar situation in Russia and the rest of Europe to consider. But for now Putin’s behavior precludes a peace deal. The most important thing for the US if it wants to get the war over and the nuclear danger to subside is to help Ukraine complete the liberation of its territory.

[See also: How much territory does Ukraine control? Use this interactive map to find out]