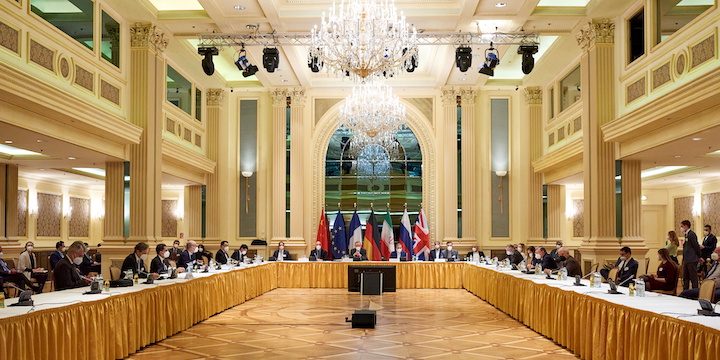 The Deputy Secretary General of the European External Action Service (EEAS), Enrique Mora, and the Iranian Deputy in the Foreign Ministry Abbas Araghchi are waiting for the start of a meeting of the JCPOA Joint Commission in Vienna, Austria April 6, 2021. Photo: EU Delegation in Vienna / Handout via REUTERS

Israeli security advisor Eyal Hulata, in his remarks on Sunday, described Iran as the “most destabilizing force in the region” and warned of “unprecedented threats” to the world should Iran successfully develop nuclear weapons.

“The region is at a critical time with regard to Iran. This is our time to send a strong and unified message – we will never allow Iran to become nuclear, ”Hulata told the Manama Dialogue security forum of the International Institute for Strategic Studies (IISS) in Bahrain on Sunday. “Iran has made great strides in the development and use of UAVs, but its nuclear development program is high on the threat list.”

The former Mossad officer warned that should Iran achieve its nuclear ambitions, “the region as we know it is no longer; the free world will face extreme threats that it has never faced before. “

“Iran will not make any concessions just because we kindly ask for them. The Iranian problem is not just our problem, it is a global problem, ”noted Hulata. “We support a unified global resolve action. But at the same time Israel will be ready to defend itself if necessary. We will make the preparations for it. “

The comments come as stalled nuclear talks with Iran are slated to resume in Vienna later this month.

Hulata said that while the US and Israel disagree on everything, “we share the goals of preventing Iran from ever breaking out a nuclear weapon and restricting regional supremacy.”

The White House Coordinator for the Middle East and North Africa, Brett McGurk, also reiterated at the Security Forum that the US commitment to the national security of Israel is “iron and inviolable”.

McGurk stated that the US is “deeply concerned, as the whole world should be.” [be] … about the dramatic and increasing acceleration of the Iranian nuclear program since the previous presidential administration left the JCPOA. “

McGurk stressed that while the Biden administration is committed to diplomacy, the US is ready to pursue other options should efforts fail.

“If we must use force, we are ready to do it decisively, we will not get caught up in an exchange of fire with Iran-backed proxy groups,” warned McGurk.

Hulata pointed out that his participation in the security forum coincides with the one-year anniversary of the Abraham Agreement, the US-brokered normalization agreements between Israel, Bahrain, Morocco and the United Arab Emirates.

“These agreements sent a clear message across the region that collaboration, innovation and optimistic vision are the best drivers for the better future of our peoples,” said Hulata.

Hulata announced that he will be traveling to the United Arab Emirates later on Sunday to join Israeli Energy Minister Karine Elharrar, who will sign a letter of intent with her Jordanian counterpart to build a major solar power plant in the kingdom. The deal also includes building a desalination plant in Israel to supply Jordan with fresh water.