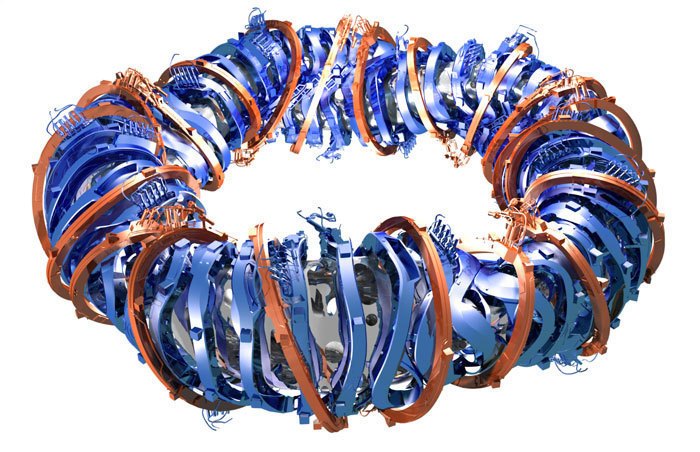 Wendelstein 7-X fusion reactor on the way to the plasma, which is twice as hot as the sun

The Wendelstein 7-X stellarator is an experimental nuclear fusion reactor designed to bring us closer to the prospect of clean, limitless energy, and since producing its first plasma in 2015, it has taken steady and significant steps toward that goal. Physicists have just confirmed another “major advance” in which the reactor’s host plasma could be twice as hot as the sun’s core as a result of efforts to address energy losses inherent in the design.

Stellarators differ from the more common, symmetrical tokamak fusion reactors in the shape of a donut as extremely complex structures full of twists and turns. As with all nuclear fusion reactors, the goal is to recreate what is happening inside the sun by exposing streams of plasma to extreme temperatures and pressures, forcing atoms to collide and merge to create monumental amounts of energy.

The Wendelstein 7-X reactor is so complex that supercomputers were required to build it. It uses a series of 50 superconducting magnet coils to hold the plasma in place as it loops around a spinning and spinning circular chamber. In 2018, the physicists involved in the project set new records for energy density and plasma confinement for such a fusion reactor.

A look inside the Wendelstein 7-X stellarator

When developing the Wendelstein 7-X, engineers wanted to address a limitation that plagues classic stellarator designs far more than tokamaks, a type of heat loss known as “neoclassical transport”. This happens when collisions between the heated particles throw some out of their orbit and cause them to drift out of the magnetic field. The magnetic field cage of the Wendelstein 7-X has been optimized very carefully to avoid such losses.

To find out whether this careful planning has paid off, scientists from the Max Planck Institute for Plasma Physics and the Princeton Plasma Physics Laboratory (PPPL) have re-analyzed the stellarator’s record-breaking experiments. This analysis focused on diagnostic data collected with X-ray crystal spectrometers and showed a large reduction in neoclassical transport and showed that in fact the high temperatures could not have been reached otherwise.

“This showed that the optimized shape of W7-X reduced the neoclassical transport and was necessary for the performance of W7-X experiments,” says PPPL physicist Novimir Pablant. “It was a way to show how important optimization was.”

This performance was achieved with the “modest heating capacity” currently available, and the analysis shows, according to the scientists, that the Wendelstein 7-X is able to contain heat that is twice as high as in the solar core in the future. But while the team is pursuing nuclear fusion, there are plenty of balls to juggle other than reaching high temperatures and tackling other forms of heat loss. Further experiments are planned for 2022 and include a redesign of the water cooling system to allow longer experiments.

“It’s really exciting news for Fusion that this design has been successful,” says Pablant. “It clearly shows that this type of optimization is possible.”

An article describing the research was published in the journal Nature.