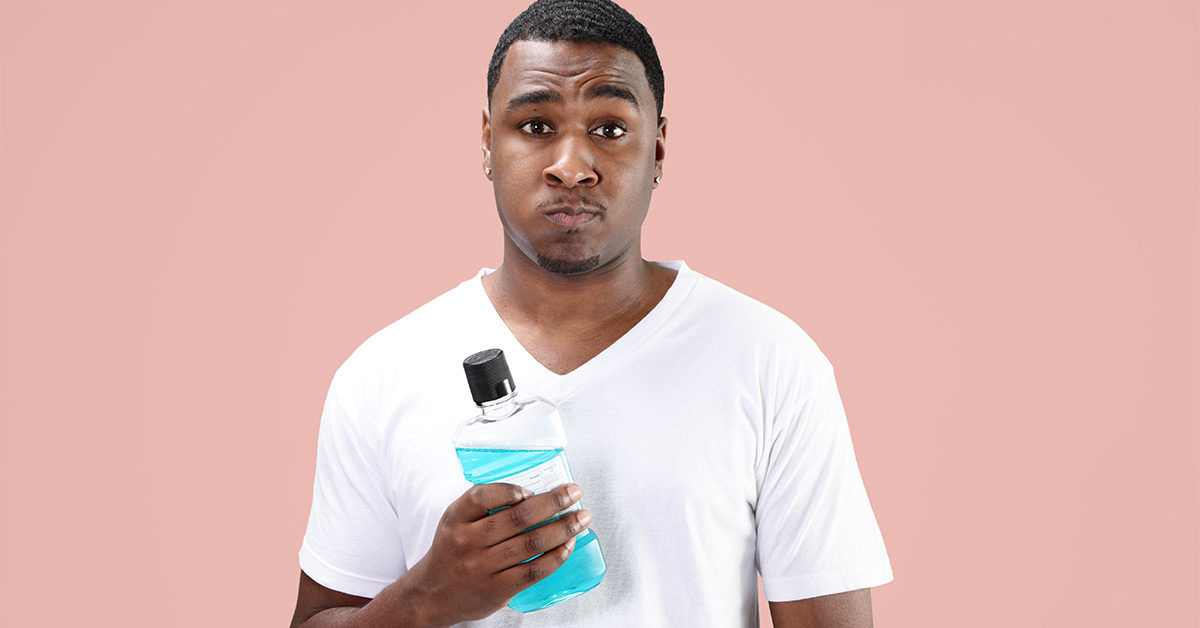 Why Does Mouthwash Burn When I Gargle? What You Need to Know

Mouthwash, also known as a mouth rinse, is a liquid-based dentifrice that cleans your mouth, refreshes your breath, and kills bacteria on your tongue and between your teeth.

Most mouthwashes advertise their tingling sensation as a sign that the product is working. But for many people, mouthwash doesn’t feel refreshing – it feels painful and it stings.

You can use mouthwash products as directed and still feel a painful stinging and burning sensation while it is in your mouth. In most cases, this doesn’t mean you did anything wrong or that you need to stop using it.

We’ll go over the various reasons mouthwash can cause a burning sensation and what to do about it.

Alcohol has antiseptic properties and is a key ingredient in many mouthwash formulas. It kills bacteria and disinfects your mouth. But pure alcohol alone isn’t enough to kill all of the bad bacteria that can cause bad breath and gingivitis.

Alcohol is just one of the active ingredients in mouthwash. Others may contain menthol. Some mouthwash formulas contain over 25 percent alcohol.

When you put a mouth rinse in your mouth you may find that the burning sensation is centralized on your tongue. Your taste buds, which are on your tongue, may be more sensitive to the taste and feel of alcohol than other areas in your mouth.

If you switch to a mouthwash that does not contain alcohol but still feels a burning sensation, you may be sensitive to any of the other active ingredients in your mouthwash.

Popular mouthwash ingredients include chlorhexidine, which can reduce plaque and help fight gingivitis, and cetylpyridinium chloride, which kills bacteria that cause bad breath. The Food and Drug Administration (FDA) has also documented a rare but severe allergy some people may have to chlorhexidine.

Mouthwash used to whiten your teeth often contains hydrogen peroxide. Essential oils like peppermint oil, eucalyptus oil, and thyme oil can be included in the mouthwash to freshen your breath. All of these ingredients can cause your mouthwash to cause a burning sensation when used.

Some people are extremely sensitive to menthol, which is made from mint or peppermint, and experience a severe burning sensation instead of a pleasant tingling sensation when using it.

Not all mouthwashes cause stinging, but your sensitivity to various ingredients can make it difficult to find one that doesn’t cause burning symptoms.

Alcohol is not a necessary ingredient for an effective bactericidal mouthwash. Some mouthwashes are done without alcohol and can be easy on your tongue, mouth, and gums. Most of the leading brands of mouthwash make alcohol-free formulas.

Menthol is also not a necessary ingredient in mouthwash. Mouthwashes that are menthol-free, mint-free, or tasteless can be found anywhere you would normally buy your mouthwash. You may need to try a few different formulas before you find a mouthwash that you like.

Making mouthwash a regular part of your daily routine is a good idea for several reasons. Different types of mouthwash offer different benefits. This can be helpful when trying to consider some aspect of your oral hygiene.

There are also therapeutic mouthwash formulas that are only available by prescription. Chlorhexidine mouthwash is sometimes prescribed to combat gingivitis and manage its symptoms.

Various mouthwashes can be prescribed to clean a dry pan after a tooth extraction, to treat side effects from cancer treatments such as oral mucositis, or to stimulate saliva production if you are diagnosed with dry mouth.

Mouthwash is only beneficial if used safely and according to the directions in the package.

You should never use mouthwash – it is meant to rinse your mouth, but it should not be swallowed. If you take more than two servings of mouthwash at a time, call a doctor or poison control hotline at 800-222-1222. Check the label to see if your mouthwash contains fluoride or ethanol and have this information ready to inform the person calling.

If the mouthwash you are using causes persistent burning sensation or discomfort, stop using it. Using a mouthwash that you are overly sensitive to can break down some of the tissues in your mouth, causing ulcers.

Children under the age of 6 should not use mouthwash. Anyone between the ages of 6 and 12 can use a mouthwash made specifically for children, but it should be supervised by an adult.

It is not uncommon for mouthwash to sting when you rinse your mouth with it. Ingredients like alcohol and menthol that cause the burning sensation are often found in mouthwash. While this is usually not something to worry about, there are many alternative mouthwashes you can buy if using your mouthwash is painful.

Always follow the directions on your mouthwash carefully and ask a dentist for a mouthwash recommendation if you are having trouble finding one that is right for you. You should also look for a mouthwash with the American Dental Association seal of approval.