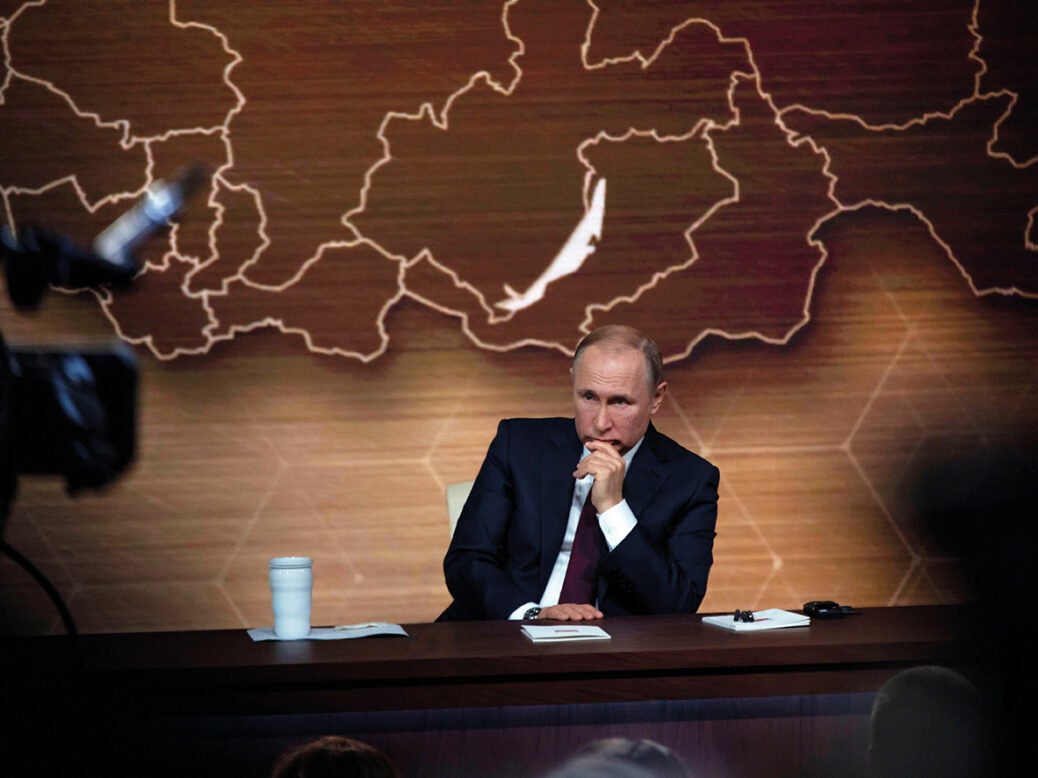 On 8 October, I woke up in the Leopolis Hotel in Lviv, western Ukraine, to the news that the 12-mile-long Kerch Bridge connecting Crimea to Russia had been attacked. One of the lanes of the road span had collapsed. A portion of the railway was on fire.

In the hotel breakfast room, there was both jubilation and concern, equally divided between Ukrainians and foreigners. Ukrainians were jubilant; foreigners were anxious. The bridge was not only of strategic value to Russia’s forces, helping to transport men and materiel into Ukraine, it was also a major symbol of Moscow’s claims on Crimea and Vladimir Putin’s imperial project. The Russian president personally opened it in 2018, and it had been described in the Russian press as “the construction of the century”.

Might the attack on the bridge be the moment Putin chooses to launch a retaliatory nuclear strike against Ukraine? Among commentators and officials, there is a growing belief that Putin wants to use nuclear weapons – the Kerch Bridge could provide the pretext.

Those from outside Ukraine – especially Europeans and Americans – are often more anxious about the course of the war than those fighting on the battlefield. In this case, jubilation and anxiety had a common root: the sense that Putin is running out of options.

Select and enter your email address

Quick and essential guide to domestic and global politics from the New Statesman’s politics team.

A weekly newsletter helping you fit together the pieces of the global economic slowdown.

The New Statesman’s global affairs newsletter, every Monday and Friday.

The best of the New Statesman, delivered to your inbox every weekday morning.

The New Statesman’s weekly environment email on the politics, business and culture of the climate and nature crises – in your inbox every Thursday.

Our weekly culture newsletter – from books and art to pop culture and memes – sent every Friday.

A weekly round-up of some of the best articles featured in the most recent issue of the New Statesman, sent each Saturday.

A newsletter showcasing the finest writing from the ideas section and the NS archive, covering political ideas, philosophy, criticism and intellectual history – sent every Wednesday.

But if he is trapped in a military quagmire with ever decreasing chances of victory, he is not yet beaten. The question is what he might do to transform his fortunes and avoid a catastrophic defeat. Nuclear weapons could be his final move.

One of the most sensational developments of the war so far is that Putin can no longer terminate it at will. In the first days of the conflict that was certainly an option. For a period, Ukraine felt stunned, while Germany and France still dreamed of a swift return to peace. Across the Atlantic, many were under the illusion that Russia had successfully modernised its army and could overpower Ukraine in less than a week. Putin also boasted of his ability to wage an energy war. The consensus was that Russia had the military and strategic advantage. Had the Kremlin been interested in a quick ceasefire, it might have been able to secure important concessions from Kyiv.

Ukrainians would have resisted, but their ability to do so would have largely depended on the kind of pressure they would be under from Joe Biden and the Europeans to make peace with Moscow. Putin’s belief that he could end the war whenever he wished certainly contributed to his strategic recklessness. This was the time when Emmanuel Macron still spoke of the need not to humiliate Russia.

A lot has changed since then. Russia has been repeatedly humiliated in the field, while Ukraine has grown ever more confident it can push the invaders out of every parcel of Ukrainian land. At this point, anyone suggesting a compromise opens themselves to accusations of furthering Russian interests. Even Elon Musk – who has made an important contribution to the Ukrainian war effort by providing connectivity to SpaceX’s satellite array, Starlink, helping the country stay online during network failures – could not escape that fate. Prominent Ukrainians, including President Zelensky, criticised Musk on Twitter for being unsupportive, after he polled his followers on suggestions for ending the war.

Putin has awoken to the reality that Ukraine now determines the tempo and timeline of hostilities. How might he regain control? If he concludes that his position will only weaken over time, the logical course of action is to consolidate his current gains. The problem is how to force a de-escalation now that Ukraine is on the offensive. One way is to threaten to use nuclear weapons. On 10 and 11 October, Kyiv and other cities came under intense missile bombardment, as Russian forces struck civilian infrastructure in what the Kremlin said was a response to the Kerch Bridge attack. 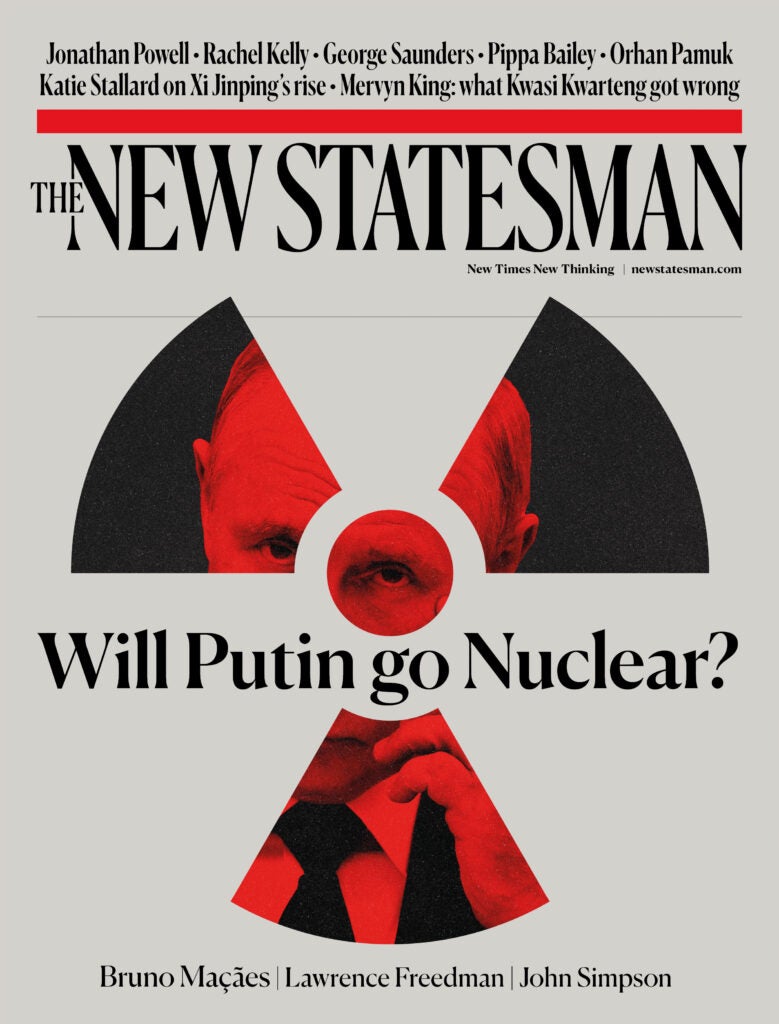 On paper, Putin could use a nuclear attack in two ways – to continue the war or to end it. The use of a low-yield nuclear weapon designed for the battlefield would not substantially change the course of events. Ukrainian officials have publicly and privately vouched that Ukraine would not surrender after such a demonstration. I think they mean it. On the front line, the impact would be far from clear or decisive. Ukraine does not use large tank columns and other possible targets, such as airfields, are not significant enough to justify the launch of tactical nuclear weapons over, say, cruise missiles. Given the chaos and lack of preparedness the Russian forces exhibit, one should not exclude the possibility that they would be more affected by the nuclear fallout. Following a tactical nuclear strike, there would certainly be an exodus of Ukrainian refugees to the European Union, but perhaps Russian conscripts would panic as well.

Were Putin to use a much larger nuclear weapon to obliterate a random Ukrainian city and kill tens of thousands of innocent civilians, modesty and common sense advise against making definitive predictions about what would ensue. But the response from Washington would doubtless be devastating and the response in Russia unpredictable. More likely than not, it would solve the problem that keeps Putin in power: the people around him – advisers, military and intelligence officials, oligarchs and the internal repression apparatus – would conclude that the risks of maintaining the current regime now outweighed the risks of a coup. The Russian public does not hide its terror of nuclear Armageddon, an inheritance of Soviet times.

Putin cannot advance his original goals by using nuclear weapons, but there is a danger that he uses the threat of a nuclear strike to end the war on more favourable terms than he could obtain through regular military engagement. From the start, Russia has deployed nuclear gamesmanship to try to win the war. The change in recent weeks is merely that it will now use its nuclear arsenal to avoid defeat.

Back in February, Putin issued chilling threats – announcing he had put Russia’s nuclear forces on alert just three days into the invasion – aimed at keeping Nato out of the conflict. He did this convinced that, once Ukraine was left to fight alone, the war could be easily won. The strategy was far from a failure. The nuclear threat limited Nato’s involvement: the Western alliance provided no troops, nor the critical military support, such as air-defence systems or the imposition of a no-fly zone, that Ukraine was desperately asking for at the start of the war. Putin must have thought air superiority would grant him victory. How wrong he was.

But the nuclear threat could now return with much stricter terms: unable to defeat Ukraine on the battlefield, Putin might try to blackmail the US and Europe into forcing it to accept a ceasefire agreement on Russia’s terms. Double blackmail, as it were. Are Kyiv’s partners so committed to a Ukrainian victory that they would risk a nuclear conflict?

Consider this scenario: at some point over the next few weeks, Putin orders that a nuclear warhead be moved from one of the dozen national storage sites across the Russian Federation to a location closer to the delivery systems, perhaps even inside Ukraine. There is universal agreement that the Biden administration should communicate this information to the public, but the reaction is easy to predict. Setbacks in battle will work to Russia’s advantage. They would make the threat more credible by suggesting that Putin is losing and so desperate as to contemplate every military option. A compromise could then be suggested in the name of responsible statesmanship, leaving Russia in control of some or all of the occupied territories.

In 1999, Russia’s security council – then led by Putin as its secretary – introduced the notion that a limited nuclear strike could be used to force an opponent to de-escalate (but the phrase “escalate to de-escalate” comes from American briefings and documents rather than Russian). This doctrine was officially adopted by Putin as president in 2000, a time of post-Soviet economic and military decline, and it naturally presupposed that Russia would be under attack. That is not what is happening now. Russia is the aggressor. It may well be the case that a nuclear weapon could be used to force an opponent to accept a return to the status quo ante. But using nuclear threats to end a conflict on favourable terms, in a world where several states have nuclear capabilities, is pure folly. If the doctrine and the precedent are accepted, they will inevitably lead us to a nuclear war in the future.

What should Joe Biden do? The responsible choice is to stay the course. In a nuclear challenge of wills, there is nothing more dangerous than changing your mind mid-course or allowing yourself to be swerved by emotion. Biden has already made clear that he accepts the rules of the nuclear game. He has kept American troops out of the conflict in Ukraine. He refused to enforce a no-fly zone. But he has also refused to force Ukraine into surrendering and has not cut off American military support. It is Putin who placed himself against the wall. Under no circumstances should the US and its allies come to his rescue.