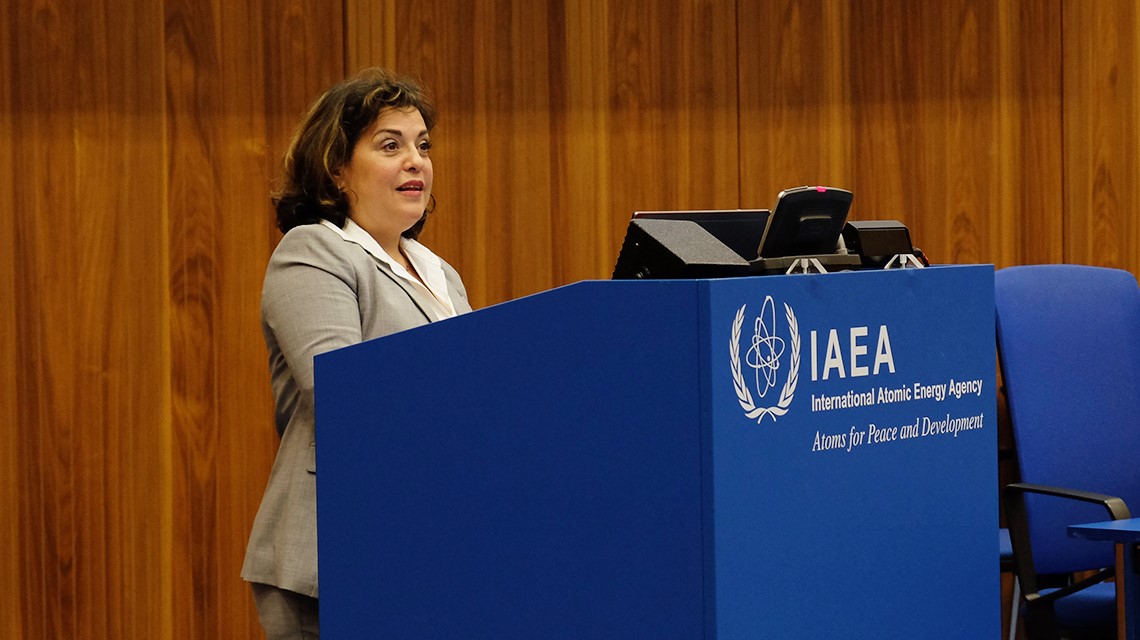 “I recognized the concept of a ‘safety culture’ as very important early on in my career,” says Maria Moracho Ramirez, Senior Safety Officer at the IAEA. “It has to do with a behavioral culture, and if you’ve been a coach you know that training to influence behavior is very complicated.”

In organizations that work with nuclear and radioactive materials, a strong safety culture helps prevent accidents and deliberate acts that could lead to theft of nuclear materials and / or damage to the facility. It relates to the way in which security and protection are perceived, assessed, prioritized and integrated into organizations. It includes leadership and other human factors. “Developing effective training to influence culture and change behavior is a challenge,” says Moracho Ramirez, “because it is very different from, for example, explaining the design of a nuclear power plant that follows a more straightforward flow and also can be “physically demonstrated.”

Moracho Ramirez, who does not shy away from a challenge, pioneered the concept of the IAEA’s first IAEA International School on Nuclear and Radiological Leadership for Safety. The school focuses on fostering a safety culture and showing the links between leadership and safety. Since its launch in 2017, it has attracted more than 200 early to mid-career nuclear professionals.

“Before school, safety publications related to ensuring effective management systems rather than the role of leadership in effective nuclear safety. With school we introduced this focus and combined it with interactive, experiential learning based on real nuclear-related scenarios, ”she says.

From physics to nuclear energy

Moracho Ramirez worked in the nuclear field for almost 30 years, but it wasn’t nuclear technology itself that sparked her interest in science and technology. Her true passion has been applied physics since childhood. “Physics is very close to nature and I enjoyed observing, collecting information and building patterns from it,” she says. “While math was a bit too close to nature for me, I felt that physics would help me understand the ‘why’ of the natural phenomena around me.”

She was first introduced to nuclear technology while studying applied physics at the Autonomous University of Madrid (UAM). “I was particularly fascinated by nuclear energy because we can produce so much energy,” she says. Moracho Ramirez completed a master’s degree in nuclear engineering and joined the Spanish Nuclear Safety Council (CSN) in 1993 as an assessor and inspector for probabilistic safety assessments (PSA) of nuclear power plants.

Her interest in the way machine-human interaction affects nuclear safety began in 1995 when she moved to Norway as a visiting scientist at the OECD Nuclear Energy Agency to conduct research on human and behavioral factors that are complex Influence human-machine interactions. “There was a nuclear power plant simulator, and I worked with a group of scientists, professors, psychologists and senior regulators who carried out scenario-based experiments, for example nuclear power plant accidents, to determine the interaction between the people involved and the connections between human and machine actions how they could be more effective, ”she says.

In 1999 Moracho Ramirez joined the European Commission as scientific secretary of the former group of European regulators for nuclear safety and was involved in the nuclear safety assessments as part of the EU enlargement negotiations with several countries with nuclear power plants. In 2003 she returned to the CSN in Spain to focus on gathering feedback on operational experience in nuclear facilities and to work with the Western Nuclear Regulatory Authorities (WENRA) Reactor Harmonization Working Group.

Moracho Ramirez joined the IAEA in 2006 as a nuclear safety officer and has spent several years conducting nuclear facility safety training for regulatory agencies. “My work was very much linked to building regulatory knowledge and expertise in countries that want to tackle nuclear power programs,” she says. “That’s why my focus was on effective training – not just presenting the IAEA’s safety standards, but also identifying the gaps between the book and its application.” In the last 15 years she has conducted 55 workshops and aid missions on nuclear safety around the world to promote security requirements and facilitate knowledge transfer.

Since taking on the role of Senior Safety Officer at the IAEA in 2015 and launching the Leadership School in 2017, Moracho Ramirez’s role has expanded to include coordinating efforts to strengthen the efficiency and effectiveness of the IAEA’s peer review and advisory services.

“Maria’s excellent analytical skills, diligence, strategic and innovative thinking are notable qualities that support a range of activities,” said Shahid Mallick, acting director of the IAEA Office for Nuclear Safety and Security Coordination. “Her role in the IAEA School on Nuclear and Radiological Leadership for Safety – which she designed, developed and implemented in just six months – has been an excellent achievement, and the course is recognized by our member states as being of significant support in the area of ​​nuclear safety.”

For her part, what Moracho Ramirez likes most about working at the IAEA is the global nature of the work. “I love working in an environment where we can look at aspects of nuclear safety from a global perspective and provide guidance based on the wealth of knowledge we have gathered from hundreds of experts with different perspectives around the world. ” She says.

The IAEA’s commitment to gender equality

The IAEA aims to increase the proportion of women in both the nuclear field in general and in the IAEA in particular by pledging to achieve gender parity – 50 percent men and 50 percent women – in the professional and higher categories by 2025 To reach agency. Read more about the IAEA’s work on gender equality. Click here for current IAEA vacancies.

Letters to the editor of Barron’s – Barron’s