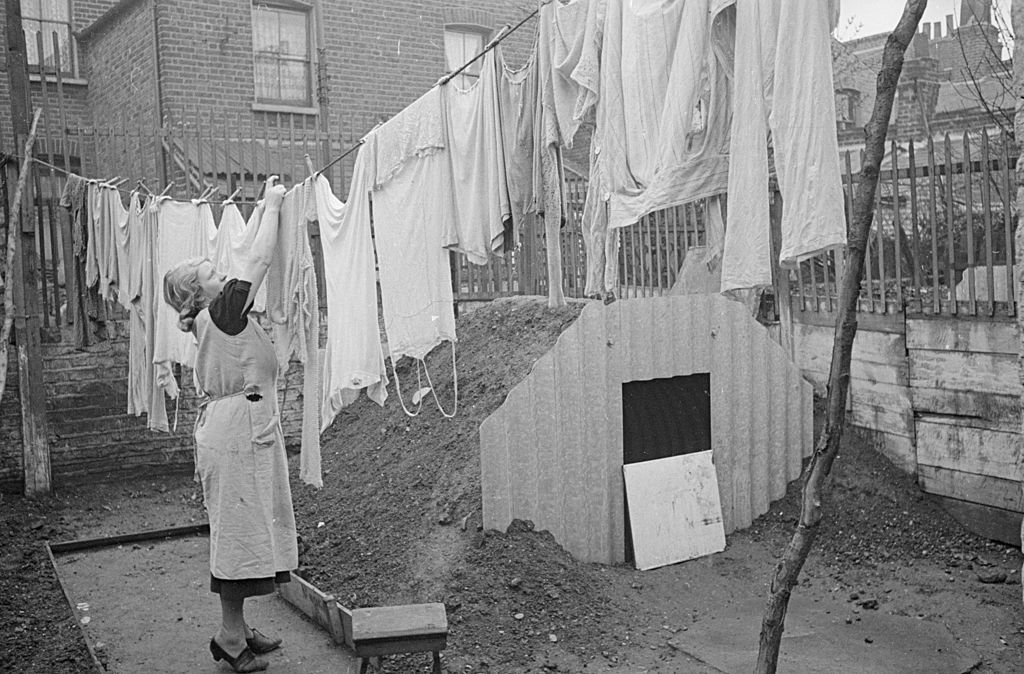 In parts one and two of this series we looked at a new trend of house bunkers built on former military land and what it would possibly mean for people to live in confined spaces and in underground condominiums for a long time. And if you’re still interested in injecting cash into your own private bunker, here’s how.

Read the first part of our series ‘Doomsday Architecture’ – For Sale: A House Six Feet Under (Art)

Read the second part of our series ‘Doomsday Architecture’ – Narrow Spaces, Isolation and Fake Reality: Could You Live On ‘The Truman Show’?

During the Cold War, when tensions between the US and the former Soviet Union reached their “coldest” peak, it wasn’t far to have your own “fallout shelter” close to your own home (a garden, a terrace was a plus) build-fetched idea.

circa 1940: A woman hangs her laundry next to the new Anderson bomb shelter in her back yard. (Photo by Fox Photos / Getty Images) 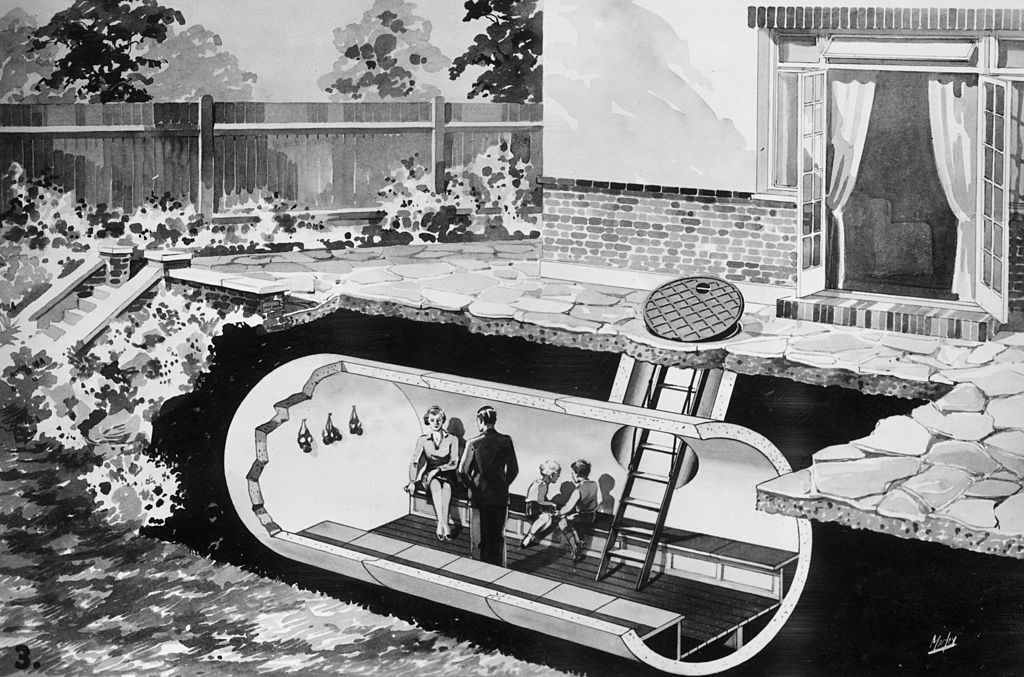 The concept apparently became quite popular after that President John F. Kennedy addressed the American public and advised them to build shelters against possible atomic bombs, be it from the Russians or some other enemy. “A nationwide understanding is required of what every level of government, private organization and citizen can do to achieve and maintain the best possible protection of civilians from the main effects of a thermonuclear attack.” he saidA mild irony when you consider that the US was and still is the only country in the world that dropped atomic bombs on another nation and its people.

But a seed had been planted, holes were dug in the ground, and the very popular one the following year Life The magazine included a story titled “The Drive for Mass Housing: New Facts You Need to Know About Fallout,” with drawings and ideas for building your own bunker.

While a Cold War is not in sight today (we hope), a long list of potential disasters – including a prolongation or recurrence of the Covid-19 pandemic – has fueled heightened fears of the possible end of times in many people around the globe ; The mere idea of ​​a future Armageddon or the Apocalypse triggered the search for safe homes, barricaded and protected by a small faction of armed men in camouflage.

Few developers around the world – but mostly in the US – have bought ex-military bases to create super-strong concrete condos in secret locations that mostly house survival communities. Cue the birth of “residences” known as the Survival Condo, Terravivos xPoint, and Europa One with “bunkers” available for purchase i.e. if you make it through the selection process.

This raised many eyebrows, of course, in some, as the writer Evan Osnos noted in The New Yorkerand even threatens to go into these “exclusive refuge (s) for the rich” and dismantle or destroy the projects; Larry Hall, the founder of Survival Condo, told Osnos:

“You can send any bullets you want to this place.

So if the idea of ​​“communities” living in custody isn’t exactly your idea of ​​life after the apocalypse, don’t fret: you can also – just like during the Cold War – build your own bunker (assuming you are Part of the world’s notorious 1%).

If you like the idea of ​​a converted military bunker without the community that usually comes with such great projects, tracking which country is ready to sell its abandoned military facilities for a few thousand or millions of dollars could be a good place to start.

In 2016 “The Northern Ireland Executive” offer for sale for 830,000 USD (11 million R) the Ballymena bunker. “The 3.74 acre, heavily fortified site on the outskirts of Ballymena, County Antrim, was built for up to 235 people and is now for sale. It is available to every affected citizen – with financial means – who is looking for an underground safe haven for the event of the nuclear failure ”, it says in an article in Irish Central. 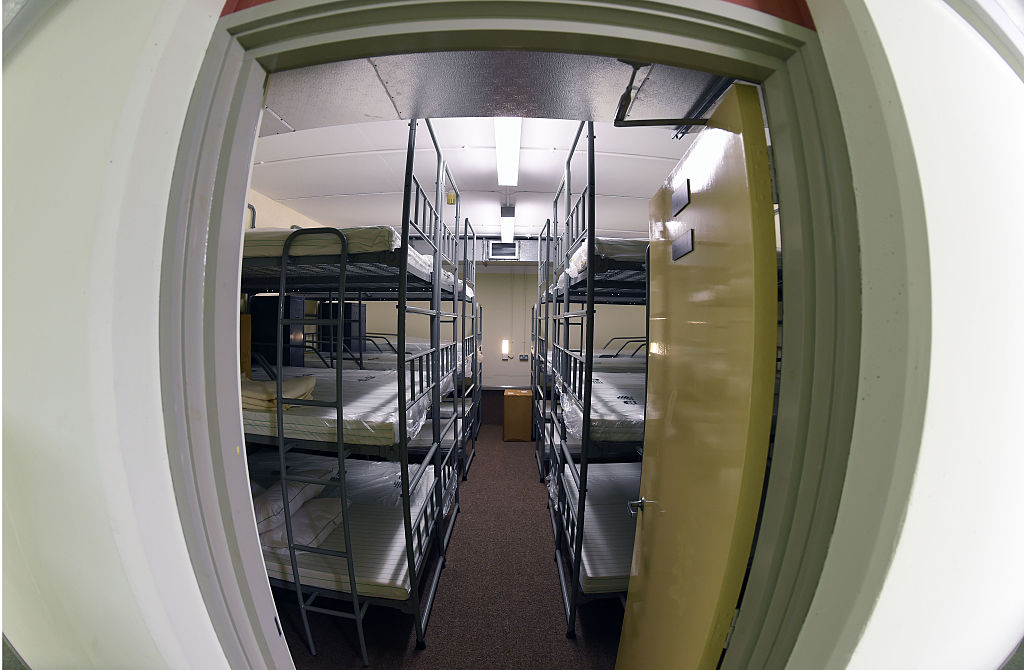 One of the female dormitories at a nuclear bunker site on the Woodside Road industrial estate on February 4, 2016 in Ballymena, Northern Ireland. The underground shelter has been put up for sale by the offices of the First Northern Ireland and the Deputy First Minister. Completed in 1990, the bunker was built for up to 235 people in the event of an atomic bomb and has kitchen facilities, dormitories and decontamination chambers. The site, one of approximately 1,600 nuclear monitoring posts built in the UK since 1955, is on the housing market priced at £ 575,000. (Photo by Charles McQuillan / Getty Images) 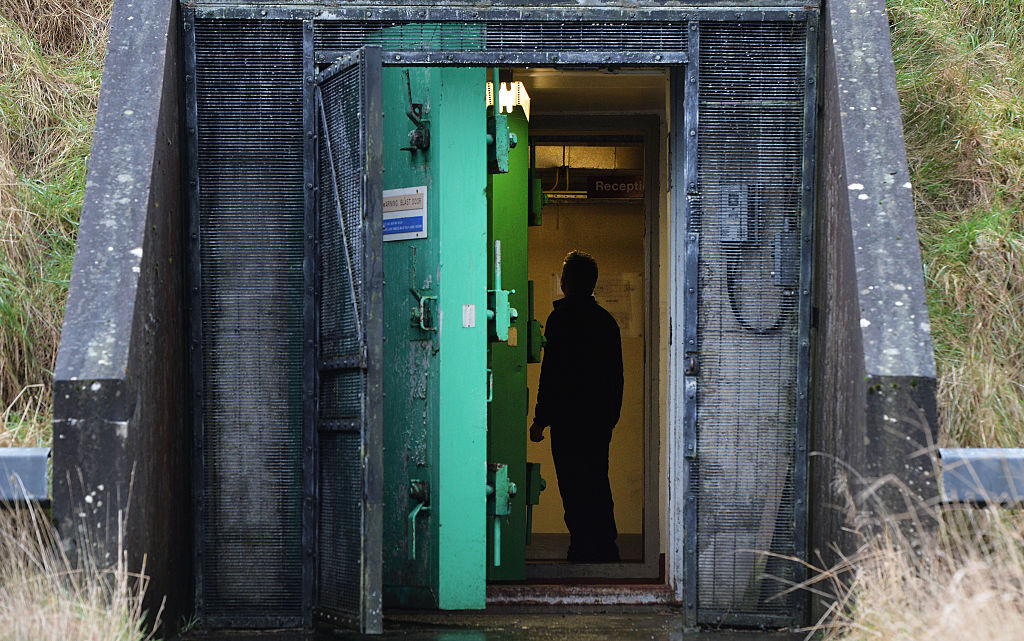 The main entrance and blast door at the nuclear bunker site on the Woodside Road industrial estate on February 4, 2016 in Ballymena, Northern Ireland. (Photo by Charles McQuillan / Getty Images) 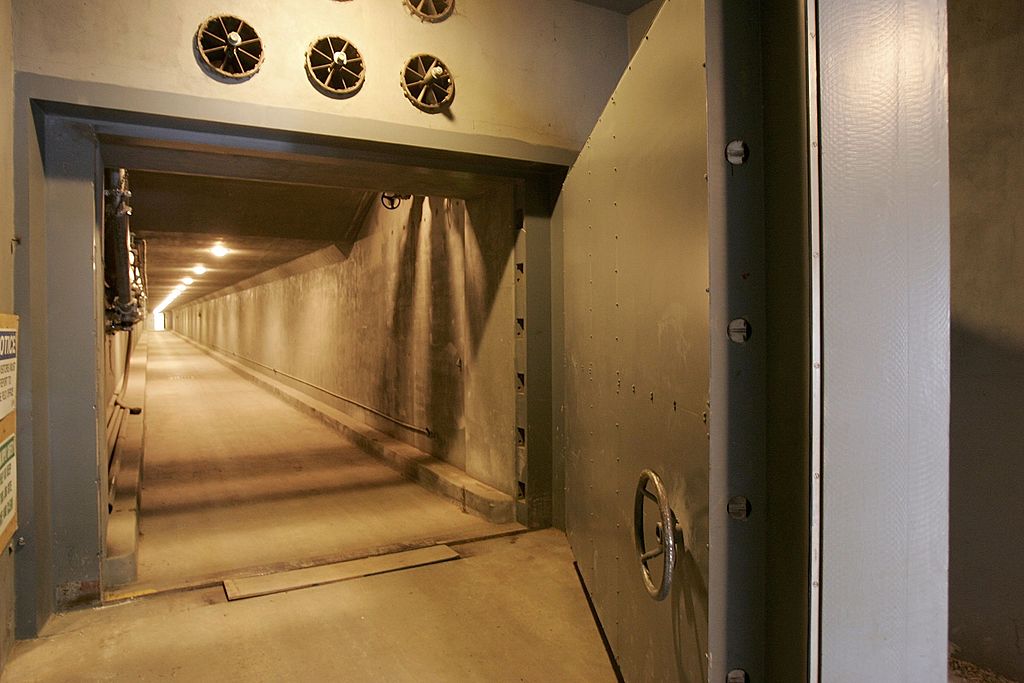 The West Tunnel blast door, which weighs 25 tons and serves as the entrance to a former government resettlement facility also known as a bunker, is shown during a media tour at the Greenbrier Resort on July 14, 2006 in White Sulfur Springs, West Virginia. The bunker, code-named “Project Greek Island,” planned by the Eisenhower administration, was a 112,000 square foot shelter built under the West Virginia Wing of the Greenbrier Resort and used as a relocation location for members of the US Congress and associated employees the event served as a nuclear attack on US soil. (Photo by Alex Wong / Getty Images)

The LoveProperty The website also lists “fantastic abandoned bunkers for sale” and adds, “Check out the weird and wonderful abandoned bunkers that are for sale right now. From decommissioned nuclear bunkers to rundown military barracks, these features let you turn off the radar and prepare for anything from a zombie apocalypse to Armageddon. Whether you’re a survivor, die-hard military fanatic, or looking for a truly unique remodeling project, these abandoned apartments are sure to seduce you.

“Are you looking for solitude, seclusion and security in one? Well, then this almost invisible earth protection could be exactly what you want. For sale with the Western Montana Group for 1.7 million USD (approx. 24 million R) is the unique hidden home is located on the edge of Yellowstone National Park in Montana and will make you smile. “

In Scotland there is a “cliff Naval base in … East Lothian has a dramatic history – and views to match. “

For more personal – but still great – designs, Sergey Makhno Architects Designs, an architecture and design firm based in Kiev, Ukraine, envisioned “Underground House Plan B”, a conceptual project that resembles the house of the future when the future is indeed Armageddon-ed. 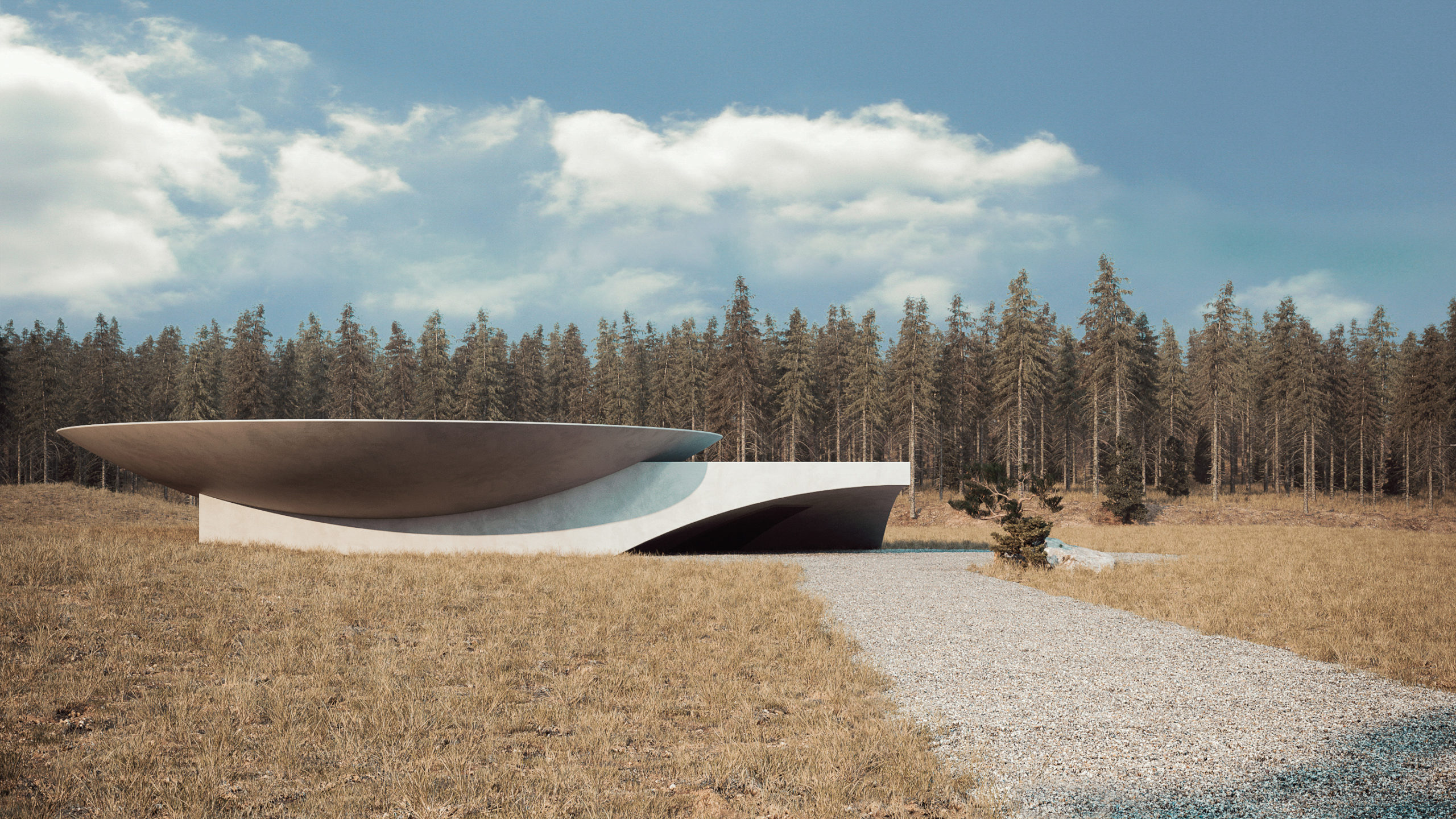 The Makhno team explains that the concept of the house was born on a few inquiries from customers “regarding the construction of the bunker”.

“We didn’t say we wanted to save the world. This is our reaction, our thoughts on how pleasant it is to design life underground thanks to the architectural techniques and materials available. But we have not taken responsibility for saving humanity. It’s going to take a real superpower. “

The studio team notes that building such a house, a feat of minimalist and brutalist architecture, would likely be very difficult, adding, “If we were to start building such a project now, we would certainly do it in collaboration with companies who only specialize in bunker construction. This is a separate type of construction, there are a lot of technical nuances, so it is better to do it with those who understand the subject.

“The real challenges would be ventilation, heating and vital systems. While turning the tap to get water and turning a button on and off to get power is obvious to most of us, it may not be that easy after an apocalypse. or for a house that is completely disconnected from the electricity grid. ”

The idea with “Underground House Plan B” is, as far as architecturally and technically possible, to restore a “daily routine” as experienced in our “normal” above-ground life and to transfer it to an underground environment. “According to our plan, the lighting in the rooms should change depending on the time of day so that a person has a biological rhythm and does not deviate from their own rhythm. Everything about architecture is a separate story, ”they say. 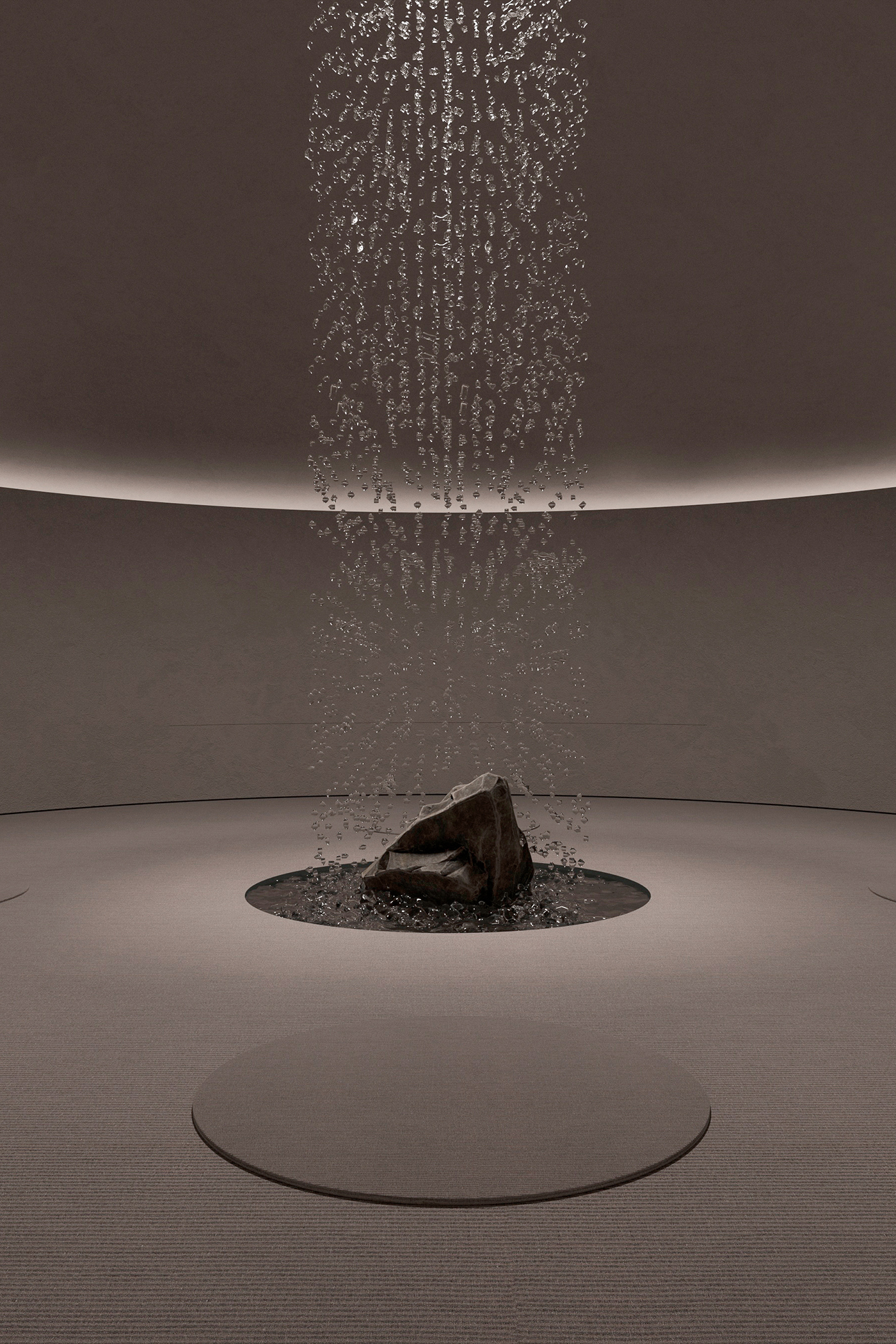 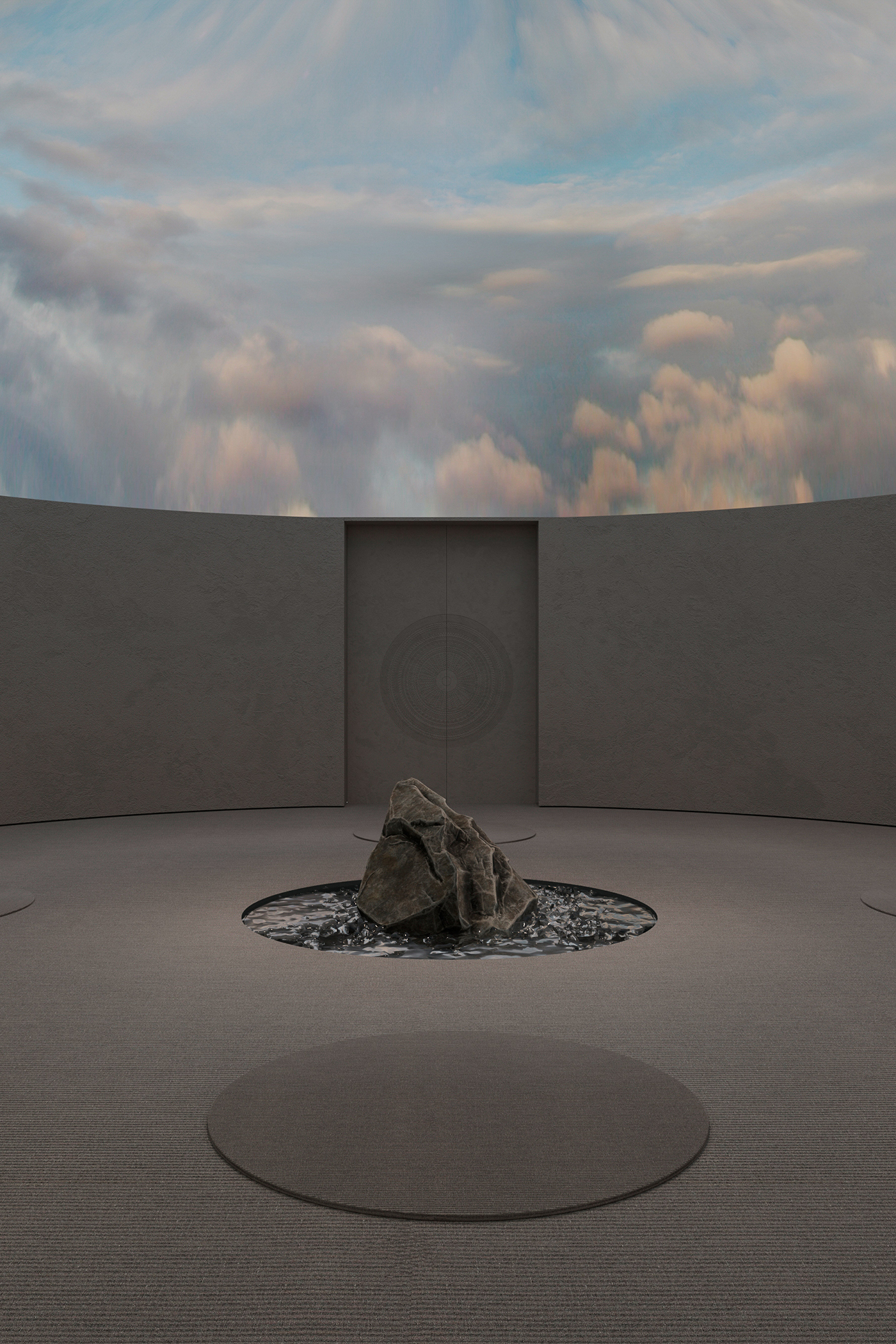 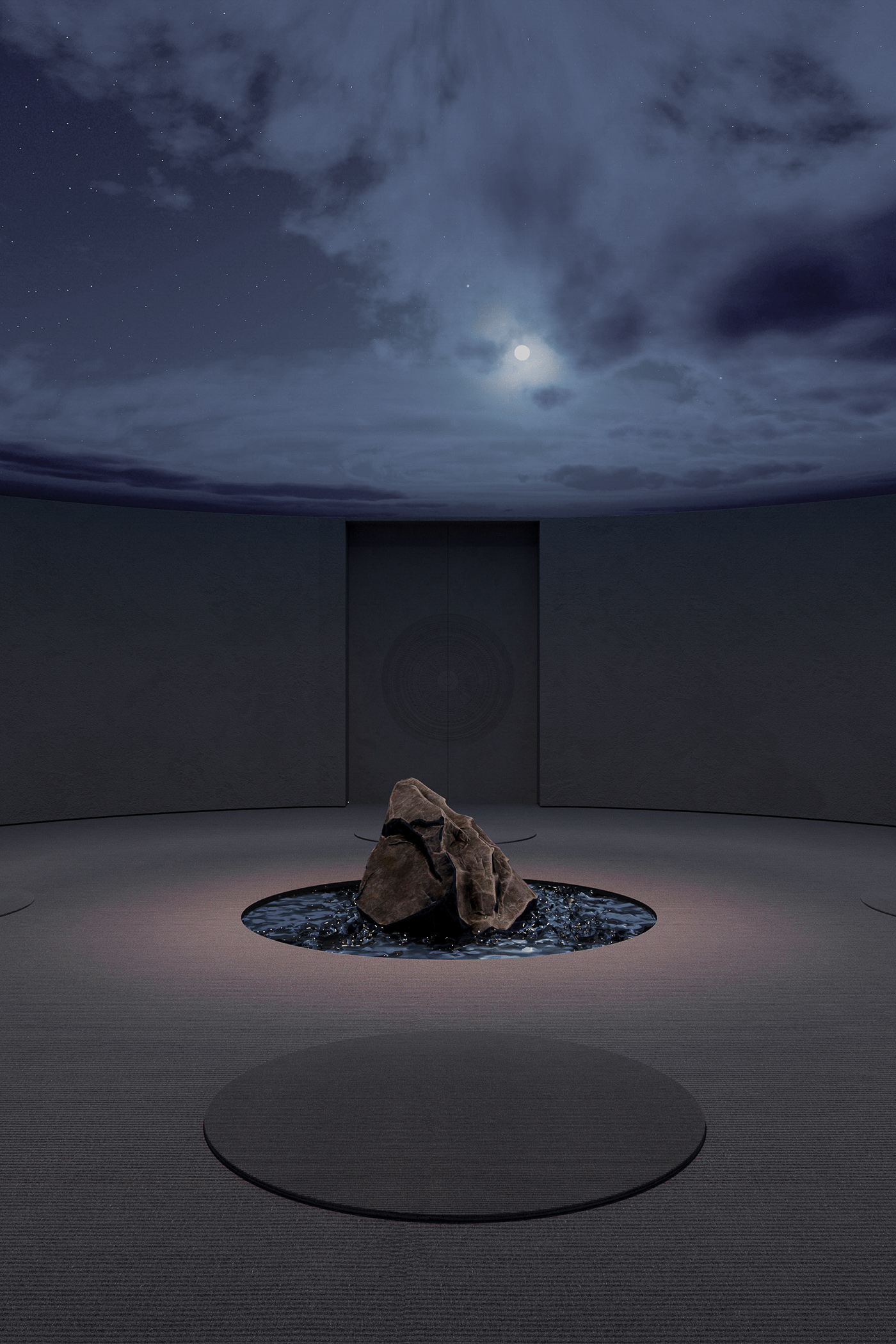 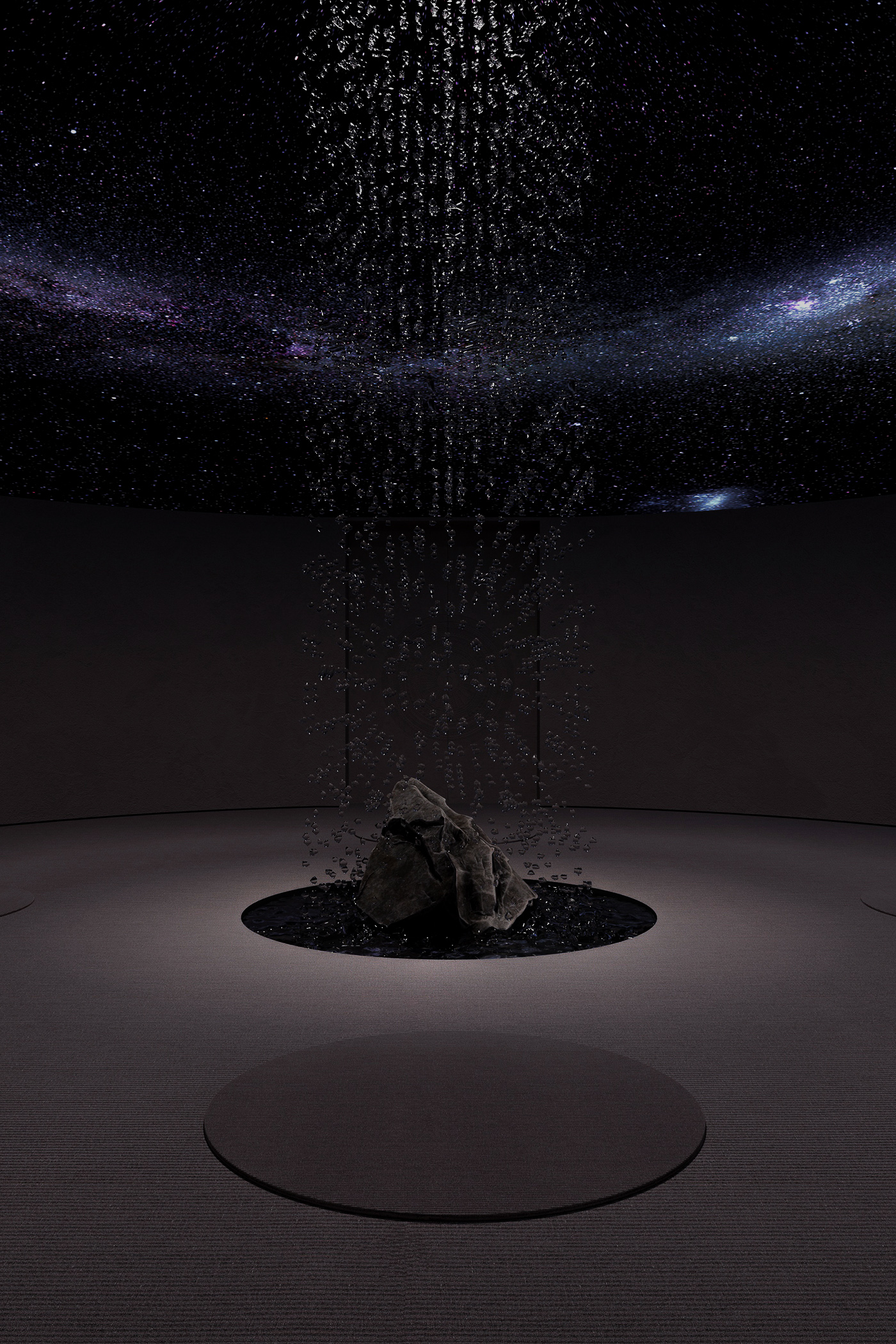 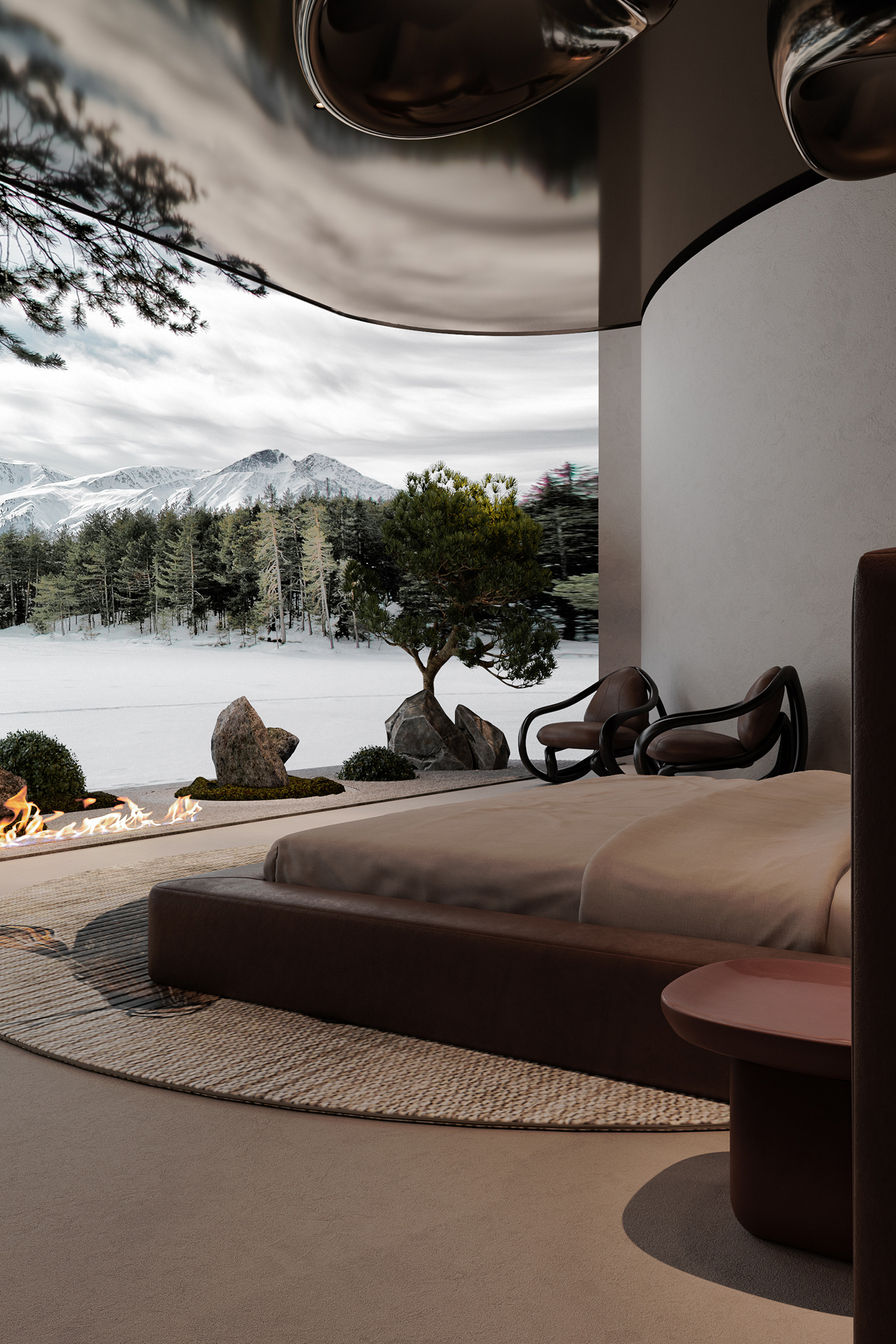 View from a bedroom. Underground house plan B. Photo by Sergey Makhno Architects.

The team adds that the house would take an estimated five years to build, even though “everything is conditional; They know that many factors affect the construction – delays, budget, etc. It is sure to be a lot more expensive than an above ground house. “

Could bunkers be a trend in the future of architecture? “The situation with the pandemic has shown that we cannot feel completely safe on this planet. We believe that those who can afford five homes around the world can also afford to build a house underground. It can even be some kind of hiding place for detox. “

That’s not all – the team believes that “the living space will be very diverse”. On the one hand there will be “futurism, high-rise buildings, roof gardens, 100 m high multifunctional residential buildings, which will include restaurants, shopping centers, a gym and a swimming pool, etc.”.

“On the other hand, there will be a near-ground ecovillage with simple architecture and natural interiors.” 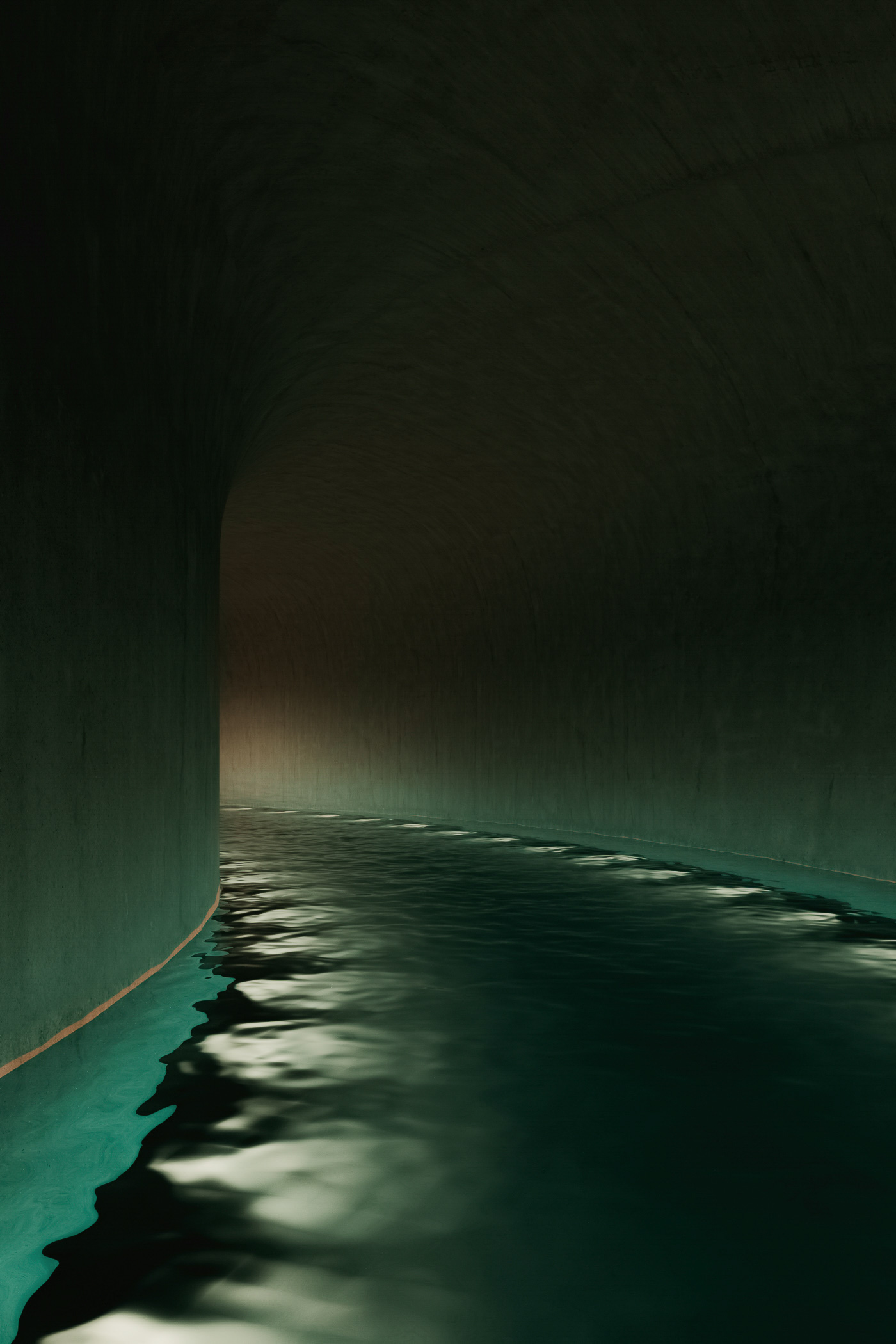 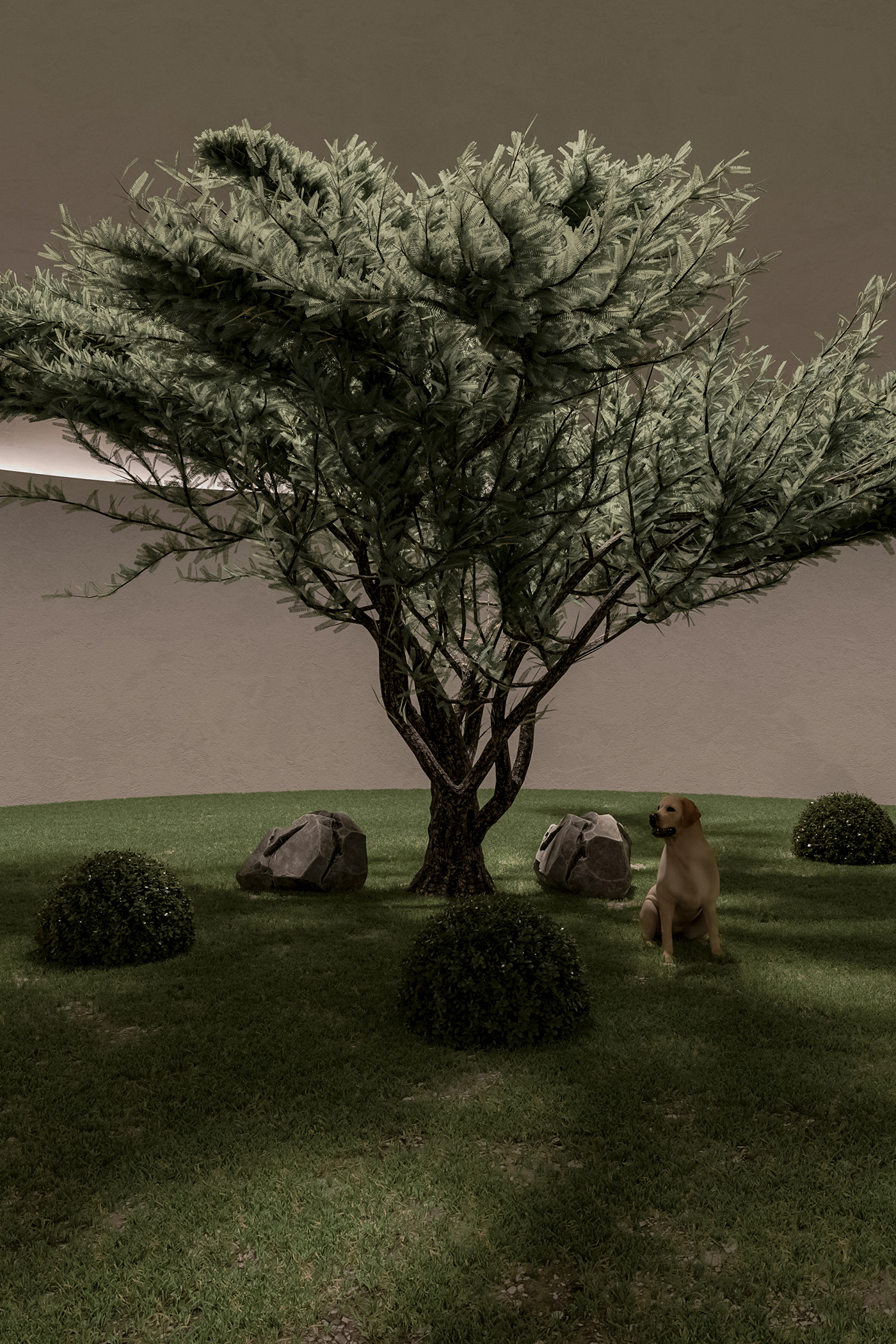 A room for pets. Underground house plan B. Photo by Sergey Makhno Architects. 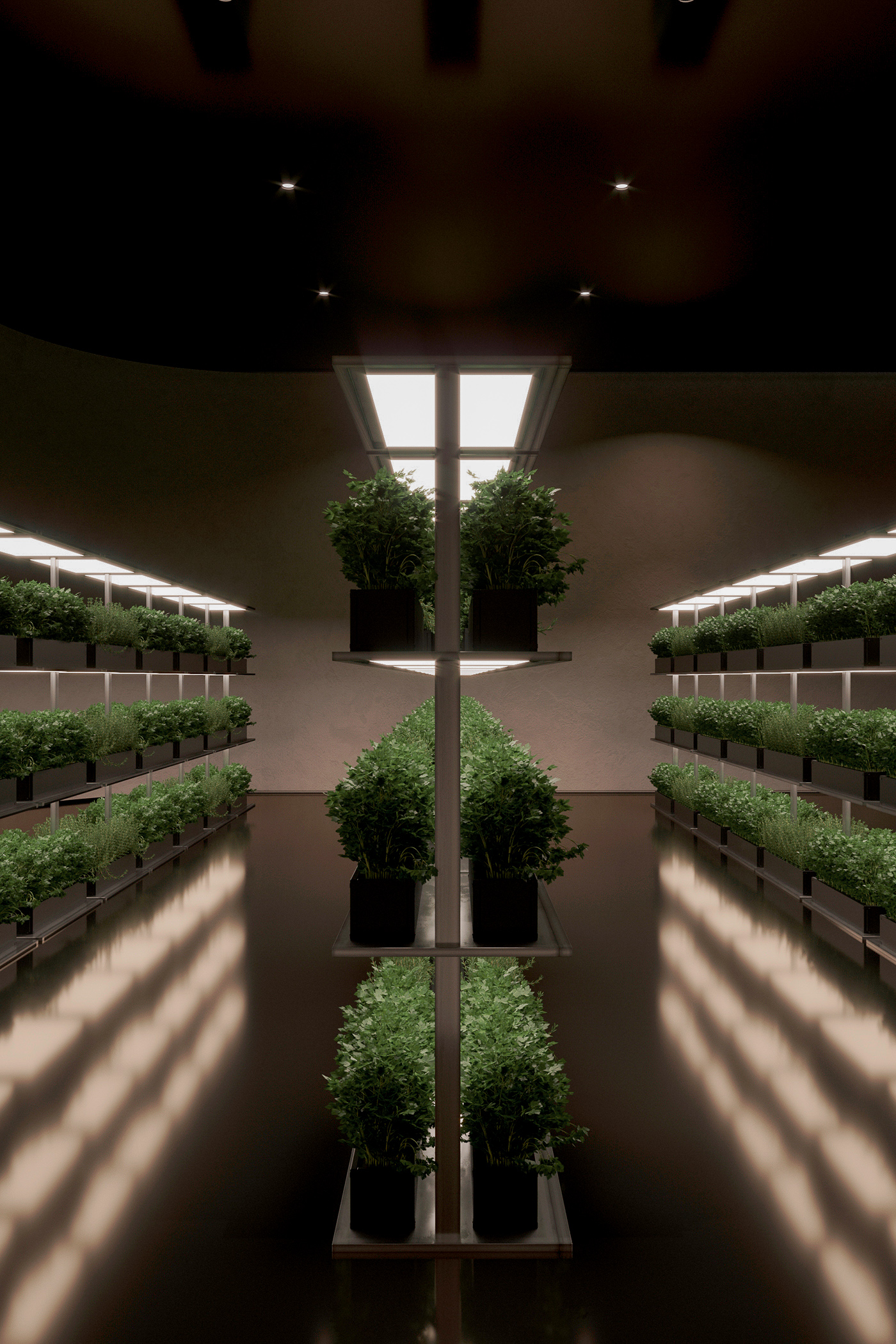 “Workspaces at home are of course a must. At the beginning of the pandemic, we received a request from our customers to also design a closet in their apartment. Now this room is like a kitchen – a must in every apartment, ”they say. DM / ML

Top is reading this hour