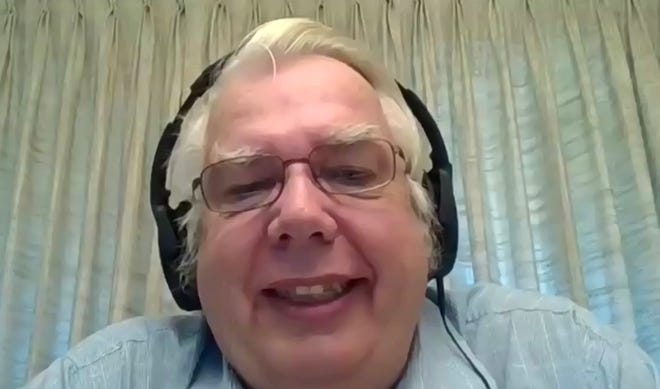 That was one message delivered recently to Friends of ORNL by Charles Forsberg, a principal research scientist at the Massachusetts Institute of Technology (MIT) and a retired ORNL corporate fellow and engineer. The only two molten salt reactors ever built and operated were located at ORNL.

Forsberg devoted most of his talk to the Hermes salt reactor that Kairos Power plans to build at East Tennessee Technology Park, the old K-25 site in Oak Ridge. The 35-megawatt thermal Hermes test reactor, which will employ 55 people, is scheduled to start producing low-cost heat (but no electricity) in 2026.

Some $100 million will be invested in the low-power demonstration reactor. Kairos Power’s ultimate goal, according to its recent webinar, is to build a commercial power plant consisting of four salt reactors. This plant at an undetermined location would generate 140 megawatts per unit in the 2030s when utilities will be retiring power plants that burn carbon-emitting fossil fuels.

He noted that in September this company, headquartered in an old aircraft hangar in Alameda, Calif., submitted its preliminary safety analysis report (PSAR) on the Hermes test reactor to the US Nuclear Regulatory Commission as part of its application for a construction permit. Construction may begin in 2023.

Forsberg attributed the origin of the Hermes reactor concept to a combination of advances in ORNL programs established to develop two types of nuclear reactors — the molten salt reactor (MSR) and the high-temperature, gas-cooled reactor (HTGR). The coolant for the MSR is a liquid salt, and for the HTGR it’s helium gas.

The fluoride-salt-cooled, high-temperature reactor (FHR) that Kairos Power plans to build in Oak Ridge is based on a liquid salt coolant tested in the MSR program and solid nuclear fuel pebbles developed for the HTGR program.

The idea that led to the FHR concept sprang from lunch conversations in 2002 by Forsberg (then at ORNL and now at MIT), Per Peterson (University of California at Berkeley and now also at Kairos Power) and Paul Pickard of Sandia National Laboratories (now retired). They were attending a Generation IV International Forum meeting as members of its Miscellaneous Reactors Subcommittee set up to propose and study alternative nuclear reactor concepts.

They published a paper in 2003 in the Nuclear Technology journal suggesting that the FHR, which could achieve high temperatures at low pressure, could produce hydrogen and electricity more efficiently and safely than other reactor concepts.

The Hermes reactor will have spherical fuel pebbles the size of Ping-Pong balls based on the TRISO (tristructural isotropic) fuel ORNL researchers developed for the HTGR program. In each pebble, coated uranium nitride fuel particles (19.5% enriched with uranium-235) are nested inside an advanced manufactured silicon carbide structure covered on the outside with graphite. The fuel pebbles are designed to contain fission products.

Forsberg said that Kairos Power (founded by Mike Laufer, a UC Berkeley graduate student, who is also the CEO) is employing more than 200 full-time people, 90% of whom are engineers, and many part-time workers, consultants and contractors at its facilities in Alameda and Albuquerque, NM Many people are designing, testing and assembling numerous hardware components for the Hermes reactor.

“If the Hermes reactor is successful,” Forsberg said, “we will be halfway home to a commercial molten salt reactor power plant because Kairos Power will have shown that the FHR with fluorine-containing liquid salt, materials of construction, pumps, power systems , heat exchangers and instrumentation is affordable and has low technical risk.”

He noted that Kairos (the word means “the right or opportune moment”) is one of a handful of companies that have the financial resources to develop and deploy energy-producing salt reactors. Another American company he mentioned was TerraPower, a company founded by Bill Gates, the Microsoft co-founder.

SINAP in China, which has interacted with ORNL researchers, is building a molten salt reactor that is expected to begin operating soon using a fuel cycle in which thorium is converted to uranium-233 fuel by neutron absorption.

It has been reported that Kairos will receive a US Department of Energy Advanced Reactor Demonstration Program share award of $629 million to fund risk mitigation in support of the Hermes reactor development over seven years. The company is working with Materion Corp., ORNL, DOE’s Idaho National Laboratory and Electric Power Research Institute. Kairos also has a collaborative development agreement with the Tennessee Valley Authority to collaborate on development and demonstration of the Hermes reactor.

Almost 70% of the world’s nuclear power plants have pressurized water reactors, co-invented by Weinberg, that run on solid uranium fuel cooled by water under pressure. Forsberg said that salt reactors, such as the FHR to be built in Oak Ridge, would be more efficient and safer than light-water reactors (LWRs) for several reasons.

“The HTGR fuel first developed at ORNL can run at higher temperatures, and liquid salts have a higher cooling capability than alternative coolants, such as water, sodium and helium,” Forsberg said. Consequently, he added, salt reactors can deliver higher-temperature heat to industrial customers, such as those involved in chemical synthesis and hydrogen production.

With their passive decay heat cooling, salt reactors are safer than LWRs.

“Because the fluoride salt has a boiling point of 1,400 degrees Celsius, you can’t melt the FHR reactor down and you can’t have an accident in the core as has happened in other reactors,” Forsberg asserted. Because MSR systems run at low pressure, he added, they don’t require the containment systems used in pressurized reactors, significantly reducing capital costs.

The pebble-bed FHR, like the original MSR at ORNL in 1955 that was designed to couple to a jet engine for the defunct nuclear aircraft program, can provide high-temperature nuclear heat to today’s popular combined cycle gas turbine power plants.

Kairos Power’s FHR will use a salt containing fluorine, lithium and beryllium, known as a Flibe salt coolant. Forsberg said Flibe will be used as a “clean salt” in the Hermes reactor; this coolant will not have uranium and plutonium dissolved in it, as will be the case with a chloride salt coolant in the Molten Chloride Fast Reactor planned for later this decade by TerraPower in collaboration with the Southern Co., a major utility in Atlanta.

“Advanced salt systems such as the Molten Chloride Fast Reactor burn up 25% of the uranium whereas LWRs burn up only 1% of the uranium,” he said, noting that such salt reactors would therefore produce less nuclear waste.

The lithium-containing flibe salt will be used in the blanket for a fusion plasma break even experiment planned for the end of this decade, Forsberg said. It will be built by Commonwealth Fusion Systems, an MIT spinoff company, which recently collaborated with MIT’s Plasma Science and Fusion Center to build the strongest fusion magnet in the world. He added that the flibe blanket in the proposed experimental fusion device called SPARC will absorb fast neutrons from the burning plasma, generating heat, as well as converting lithium-7 to tritium, a fusion fuel.

“If the experiment is a success,” he added, “total energy out will be more than twice the energy put in.”

In the battle to slow devastating climate change, safer, more efficient, affordable and carbon-free fission and fusion power plants will likely be needed, and molten salts may be a key ingredient.

How People From 1955 Imagined Technology of the Future