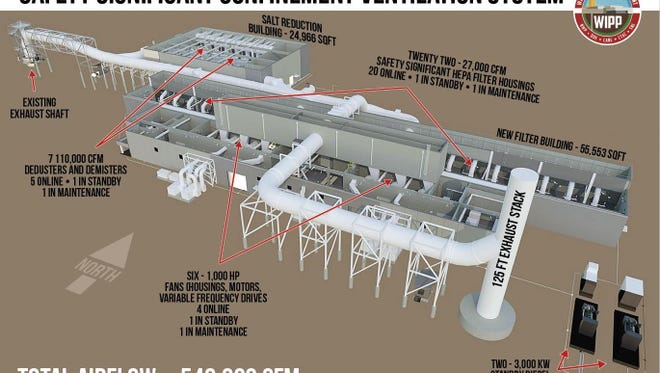 Personnel and other issues at the pilot waste isolation facility continued to be raised by the federal government’s surveillance agency in a biennial report attempting to identify troubled areas in the government and ways to improve operations.

The Government Accountability Office (GAO) identified the US Department of Energy’s contract and project management at both the National Nuclear Security Administration (NNSA) and the Office of Environmental Management (EM) as one of six areas in its “High Risk List” 2021 had improved somewhat since the last such report in 2019.

EM manages WIPP’s operations at the federal level as low-level nuclear waste is permanently disposed of in an underground salt bed at the facility near Carlsbad.

More:What does the pilot plant for waste isolation hope to achieve in the event of a two-month failure?

In the report, GAO pointed to a “significant” staff shortage at WIPP that could prevent WIPP from completing construction projects necessary to increase the facility’s waste disposal space and enable more underground workers to collect waste dismantle and dispose of at the same time.

A request for comment was sent by the Current-Argus to the DOE’s Carlsbad Field Office, but at press time there was no response.

At the time of this report, WIPP was rebuilding the facility’s ventilation system, known as the Safety Significant Confinement Ventilation System (SSCVS), and a new supply duct valued at nearly $ 300 million.

Both projects were recently shut down when the subcontractor who built the ventilation system was hired and the New Mexico Department of the Environment halted utility manhole construction, citing the rising COVID-19 cases among WIPP employees.

More:WIPP: Test of the fan, which could be contaminated with radiation, completed. Results to follow

The facility is also close to completing the dismantling of its eighth waste storage panel, which is expected to be completed by the end of 2021.

WIPP staff was also specifically mentioned in one of the three recommendations of the report, the only specific entity included in the list.

In addition to incorporating better project management practices across EM and ensuring that the cost and schedule estimates are correct, the GAO specifically requested the DOE to fill the vacancies in its WIPP office.

According to the GAO report, EM personnel struggles could hamper operations like WIPP. The agency has taken steps over the past year to increase its recruiting effort by launching its acquisition corps to better evaluate contracting and better identify needs.

“The bottlenecks may affect EM’s ability to manage contractors running two capital investment projects that are necessary for the facility to reach full operational status and meet the schedule for the construction of additional disposal areas,” the GAO report said.

The report also pointed to a lack of reliable cost analysis and planning at WIPP and several other facilities such as Idaho National Laboratories and the Hanford, Washington site.

“For example, EM has not consistently developed reliable cost and schedule estimates for its remediation efforts, including at the Idaho site, three gas diffusion plants and the waste isolation pilot plant in New Mexico,” the report said.

The High Risk List was not the first time in last year that GAO raised concerns about the WIPP facility and its operations.

In November 2020, GAO released a full plan of the facility. Possible improvements were necessary to avoid disruptions in the disposal of nuclear waste at WIPP.

This report raised concerns that WIPP did not have enough planned space to be built before the available space was full, which could disrupt waste disposal.

The report said that improved planning and the elimination of job vacancies were needed to ensure WIPP’s future success.

Records show that in 2020 only 49 of 76 approved positions in the DOE’s Carlsbad Field Office (CBFO) were filled, meaning 27 positions have been vacant – most since 2010.

More:WIPP: ‘Minimal’ radiation release to be expected when using a contaminated fan

“The DOE field office responsible for directly overseeing the SSCVS and Utility Shaft projects, CBFO, has a significant staff shortage that can affect its ability to meet the challenges for these projects and stay on schedule,” said it in the report.

“DOE cannot guarantee that the planned additional physical space will be built by WIPP before the existing space is full, which would lead to a possible interruption of the disposal operation,” the report said.

Capital projects like the utility well and SSCVS at WIPP are also of concern, the report said, as officials at the facility struggled to obtain regulatory approval from state agencies and find contractors able to carry out the work.

On Monday, the DOE Office of Environmental Managed released its priorities for 2021, including the completion of the WIPP salt reduction building, which is part of the SSCVS and is listed as a top priority along with two other projects at the Hanford and Savannah River sites.

EM also listed the completion of 30 transuranic waste (TRU) from Los Alamos National Laboratory to WIPP as another priority, along with the start of mine access drifts on the west side of the subway.

“By successfully managing our past ecological legacy, EM advancement means safer, cleaner locations and new economic opportunities for the future.”

Don Hancock, director of the nuclear waste safety program at Southwest Research and Information Center – an Albuquerque-based nonprofit government watchdog – said WIPP recently caught GAO’s attention after an accidental radiological release in 2014 and the most recent capital project had been announced.

“Costs and schedules are more important for large construction projects. WIPP hasn’t had one in more than 30 years, but two of them are underway now, ”said Hancock.

“GAO is concerned that DOE does not have the staff to oversee these projects, which means they may be behind schedule and above budget. I hope other government officials will pay attention to these things.

“The visibility was too low for too much of WIPP’s story.”

The problem was not limited to WIPP itself, Hancock said, but the problem addressed a wider concern with the DOE as it was able to adequately commission and complete large construction projects.

“WIPP is part of a longstanding cultural problem at the DOE. WIPP is one of many, ”said Hancock. “The fundamental cultural problem at WIPP is that WIPP has not had any major contracts in the past 30 years. DOE has no experience in large contract projects at WIPP. WIPP is a classic example of the entire DOE problem. “

Jay Coghlan, executive director at Nuclear Watch New Mexico, said the problem was wider than WIPP’s, but pointed to a system problem with the DOE and a history of poor accountability to contractors.

Meanwhile, he referred to GAO’s report on $ 512 billion in environmental liabilities with the DOE, out of a total of approximately $ 600 billion held by the United States.

“DOE needs more of a nationwide perspective. It has never issued a programmatic environmental impact statement for its remediation programs and has refused. There are different standards in different locations,” he said. “There are no built-in, standardized cleanup levels. DOE just lacks this built-in check.”

Coghlan argued that the DOE needs to introduce nationwide standards and accountability in its facilities to address the concerns, but he said accountability also needs more federal employees to oversee contractors.

“There aren’t that many federal employees overseeing the contractors. It’s just adding more shifts,” he said. “In the past, the DOE pampered its contractors and just let them get away with way too much. There was a lack of accountability.”

Fluoride to the rescue? Addressing the challenge of antibiotic-resistant bacteria